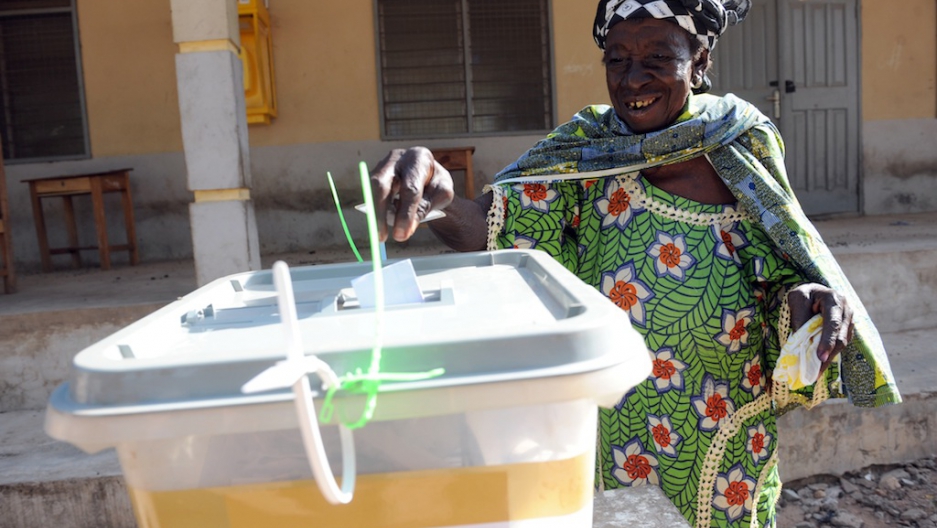 An elderly woman casts her ballot at the Bole polling station, in the Bole Bamboi constituency of northern Ghana, on December 7, 2012. Ghana voted in a high-stakes presidential election today which is expected to be close, with the emerging country seeking to live up to its promise as a beacon of democracy in turbulent West Africa.
Credit: PIUS UTOMI EKPEI
Share

The United States is urging Ghanaians to accept the results of Ghana’s recent elections, even though the main opposition challenger for president has not conceded defeat, Agence France-Presse reported.

More from GlobalPost: Voters head to the polls in close Ghana election (UPDATES)

According to Ghana’s election commission, 50.7 percent of voters cast their ballots for incumbent president John Dramani Mahama while slightly less than 48 percent of voters chose challenger Nana Akufo-Addo, who came in second, Voice of America reported. Mahama needed to win at least 50 percent of the vote to avoid a run-off.

However, Akufo-Addo’s party alleges that electoral workers conspired to rig the votes, Reuters reported. Hundreds of NPP supporters protested in front of the election commission building on Sunday until the police broke up the demonstration with tear gas.

Akufo-Addo said Monday that his New Patriotic Party is compiling data from polling stations before deciding on how to precede.

"The United States congratulates President John Dramani Mahama and the people of Ghana for the successful election on December 7," White House press secretary Jay Carney said in a statement, the AFP reported.

"This is the sixth successful presidential and parliamentary election since 1992, and further demonstrates the people of Ghana's commitment to democracy and the rule of law,” he continued. “The United States encourages all parties to accept the results and to use the appropriate legal processes to resolve any electoral disputes."