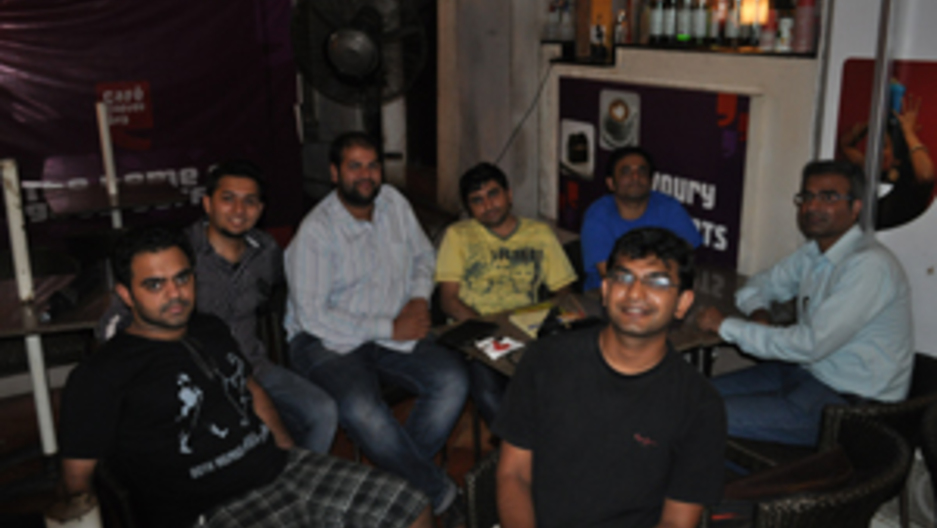 Share
At a coffee shop in central Mumbai, seven men sit around a table. This is one of a dozen regional groups of atheists in India. Most of them started on Facebook and slowly moved outdoors. The monthly meetings here in Mumbai are small, but every time new people come. One guy named Vikram is new to the group. He says this is the first time he has been around even this many people who are atheists like him. "When I came to this meet, I was in fact skeptical about what is exactly going to happen," Vikram says looking around the table. "It is really very pleasant for me to meet people. I am surprised that there is a forum like this. I am pretty glad I came to this meeting today and you won't call me arrogant for not believing in God." The men around the table nod their approval. They say it's lonely being an atheist in India. They're alienated by friends and family. Vikram says he has even been physically threatened. There is no official count of how many atheists there are in India. And urban atheists say that would-be non-believers in rural areas are likely too scared to admit their atheism openly. In fact, this is one of the complaints of the atheists. They want government recognition. Another new member, Amit explains that the recent Indian census, "There is this question, 'Which religion do you belong to?' There's no box which allows me to choose that I do not belong to any religion, or that I am an atheist. I find that deeply, deeply offensive." Amit says he wants atheism to be recognized on government forms, "On any form any municipal form, there is no form that I can say atheist and not be questioned, 'What the hell have you written?'" Another man says he was forced to write a religion on his daughter's birth certificate. When he tried to write "None" the official told him that was not allowed. Atheist say they are often scared to debate religion publicly because of two laws, commonly called the "blasphemy laws." They're remnants of the British system, and say a person can be fined or face jail time for maliciously attacking religion. And then there's the fact that India allows religion to dictate what would be civil functions in the West. So each religion has its own set of laws for issues like inheritance, marriage and divorce. Muslims follow one set, Hindus another. Atheists must pick which set to follow. Atheist group member Vikram says in a country like India, it shouldn't be this way. "In India, every one has the right to chose their religion and every one has the right to practice their religion, I should have the right to reject every religion," Vikram says. "And if I want to say it aloud, I should be allowed to. If I want to doubt someone's God, yes I should be allowed to. That is what free speech is." The men around the table say they agree. In fact, India's first prime minister, Jawaharlal Nehru, was a vocal non-believer. He might have checked none for religion on the census form. But regardless of what's legal, shunning religion in India is culturally taboo. Many atheists say they're scared to tell their parents and continue going to temple and church to appease their families. They call the process of telling family and friends that you're an atheist "coming out" – like coming out as gay. Dolly is a 34-year-old IT executive in Bangalore. And she would know. She's gay and now describes herself as a secular humanist. Dolly was raised in a Christian family, but her sexuality led her to question organized religion. Dolly says that she read in the Bible that being a homosexual is a sin. "So I started questioning, and I started questioning everything in the Bible," Dolly explains. "So it started with my sexuality. First, I started with Christianity, then with all the religions." Dolly says her parents did not accept either — her being gay or an atheist — and sent her to counseling and Christian retreats. Now, Dolly says her family tacitly accepts her beliefs, but still doesn't feel comfortable expressing her atheism widely. For now though, the laws remain unchanged, and atheists, however many there may be are a gathering presence online.