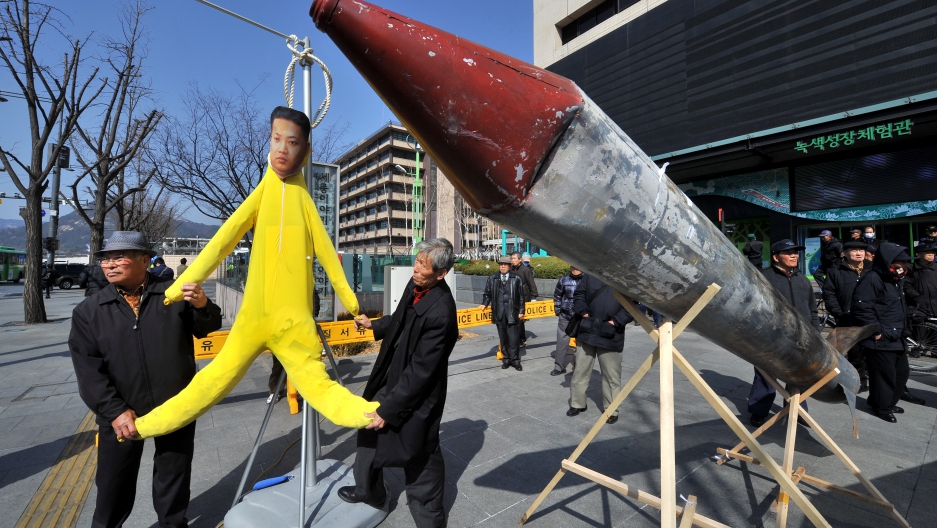 South Korean conservative activists hang an effigy of North Korean leader Kim Jong-Un next to a mock North Korean missile during a rally denouncing the North's announcement of a planned satellite launch, in Seoul on March 20, 2012.
Credit: JUNG YEON-JE
Share

North Korea has delayed a rocket launch set for as early as today due to technical difficulties, pushing the controversial event to later this month, according to The New York Times.

A Korean Committee of Space Technology spokesperson attributed the delay to “a technical deficiency in the first-stage control engine module,” saying the launch will be pushed back to December 29, The New York Times cited the country's state-run Korean Central News Agency as saying today.

The statement did not provide details over than technicians were "pushing forward" with final launch activities, said The Associated Press.

The Unha-3 rocket launch, part of the communist country's Kwangmyongsong satellite project, has worried the international community over fears the launch will serve a cover for ballistic missile testing, according to CNN.

The launch would also defy restrictions placed on North Korea by the United Nations, prompting warnings that the isolated country may be hit with fresh sanctions if it goes through with it, said AP. North Korea says the launch has nothing to do with ballistic activity and is part of a domestic space program.

Take-off was originally scheduled to mark the passing of North Korea's former leader Kim Jong-il, according to Reuters.

Japan earlier vowed to shoot down the aircraft if it entered its airspace, according to Voice of America.