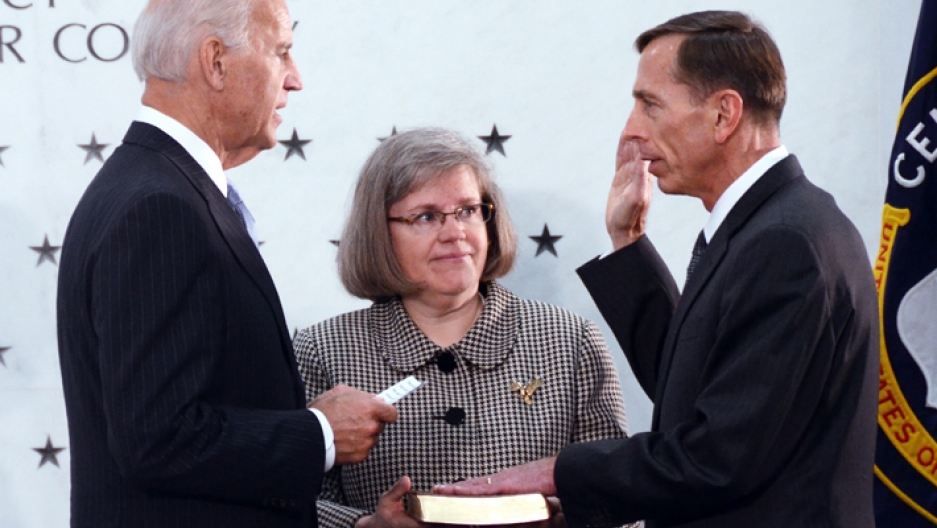 General Petraeus ceremonially sworn in by Vice President Joe Biden at CIA headquarters on October 11, 2011. Petraeus resigned from his position as Director of the CIA this past November. (Photo courtesy of the Central Intelligence Agency via Wikimed

David Petraeus, the highly decorated war hero, turned disgraced former head of the CIA made a once unthinkable shift from military to intelligence.

But it isn’t at all uncommon anymore. In fact, the line between the Pentagon and CIA has become harder to distinguish.

Greg Miller, the national intelligence reporter for the Washington Post, says Petraeus's opinions might not be far from the Pentagon's and could potentially be why the Pentagon is getting more involved in espionage. Traditionally, Miller says, the military's purpose is to carry out lethal operations to protect the United State national interests. The CIA's fundamental mission is intelligence collection, but the boundaries between the two have increasingly blurred.

"The CIA carries out more lethal operations than the Pentagon, through its drone campaign in Pakistan and in Yemen," he said.

Currently, Miller said, the United States is pursuing an al-Qaida affiliate in Yemen who has attempted to carry out a number of attacks on the U.S. But the U.S. is fighting back with drones operated by the CIA as well as a separate collection of drones operated by the U.S. Joint Special Operations Command, the military's elite counter terrorism commando force.

"We're just beginning to have a debate on what are the appropriate roles of these institutions," he said.

One of the main concerns of John Brennan’s, Obama’s top terrorism advisor, Miller says, is how lethal the CIA has become and its focus on carrying out targeted killings through drone strikes. Another concern is once these entities blur, there are risks to the mission of gathering intelligence.

"If the CIA is spending a lot of its energy trying to find targets to hit with drone strikes, how much energy does it have left to focus on gathering intelligence on China and other important national security issues," he said.

Under Petraeus’ leadership, drone strikes seemed to increase. But, Miller says, those decisions are ultimately the president's.

In the past, tensions between the two agencies surfaced when the military wanted to get more involved in intelligence and the CIA drone strike program. But the two seem to be working together now.

Miller says the Pentagon's five-year plan calls for adding 1,600 new military spies — trained by the CIA. Before, whenever the Pentagon would move toward expanding its intelligence operations, it would trigger an intense turf battle with the CIA. Oftentimes the Pentagon was forced to pull back. Now there is a sort of CIA buy-in to the Pentagon plan.

This shift toward cooperation has three components, Miller says.

"One is the personalities that are in position now. You have this unprecedented crossover in the senior leadership ranks of both these organizations. You have a secretary of defense who used to run the CIA,” he said. “His top intelligence official at the Pentagon is a former CIA operative. You have, until recently at the CIA, before Petraeus stepped down, he had been one of the most highly decorated military generals of his generation.”

But, Miller says, there is another big factor for the CIA’s embrace of the DIA.

"This deal that the CIA has cut with the Pentagon was enabled by the fact that the CIA gets to have ultimate control over what the Pentagon was doing,” Miller said. “Whatever the Pentagon ends up doing, it's not going to undermine CIA operations. Secondly the CIA is so stretched that it welcomes the chance to have this other entity that it can offload work to."

Now that the military is coming out of two wars, it faces significant retrenchment. Intelligence agencies on the other hand, won't be facing the same level of budget cuts.

"One of the lessons coming out of 9/11 has only been reinforced over the past decade — that you can't afford to start cutting back on intelligence, or the consequences could be dire," he said.

Miller said the nature of the conflict with al-Qaida comes down to eliminating individuals perceived as threats who are accused of being behind plots against the United States. This doesn't require large land forces, which is why the drone has become the most potent weapon in the fight.

The trouble with the blurring of the line between these agencies, Miller says, are the systems in government that are designed to keep track of who’s doing what.

“When you start blurring these roles, then activity, really sensitive activity, starts to fall into the seams," he said.

But, he says, the blurring and the convergence of the military and intelligence is going to continue.