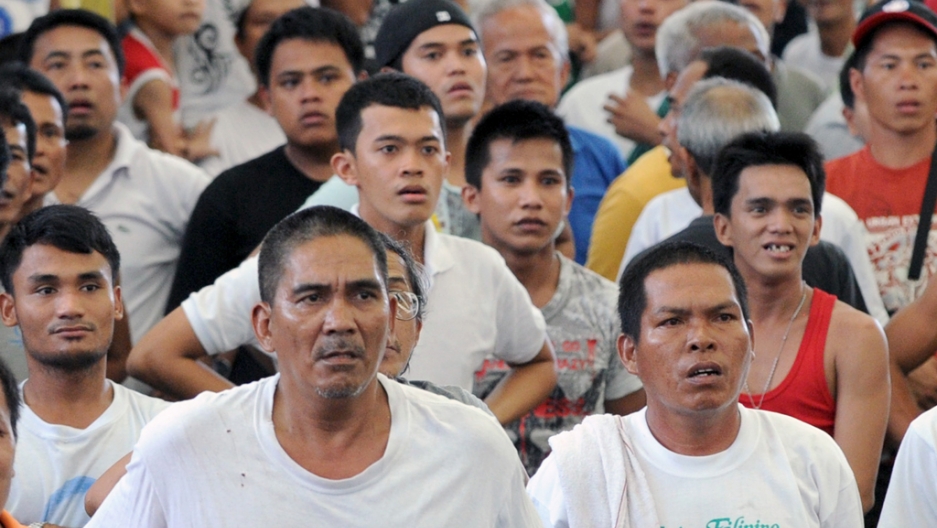 When Manny Pacquiao loses, a whole nation feels his pain.

Pacquiao — a legendary figure in his native Philippines for his boxing-singing-political career — lost to Mexican Juan Manuel Marquez in their fight in Las Vegas on Saturday night.

After falling to the canvas once himself earlier in the fight, Marquez dropped Pacquiao with a right hand in the dying seconds of the sixth round.

It took Pacquiao a few minutes to regain his footing, leaving many of the 16,000 spectators at the MGM Grand Garden Arena in shock.

“He’s not an easy opponent,” Pacquiao said, according to Reuters. “I did my best. I know that I got him in the last couple of rounds, but I started to be over-confident and I got hit by a solid punch. I did not expect that punch.”

The only consolation for Pacquiao, who is now 54-5-2 with 38 knockouts, is that this wasn’t a title fight. His opponent improved to 55-6-1 (40 KOs), and there’s talk of a fifth fight between the two welterweight opponents.

More from GlobalPost: A Pacquiao loss, a pall over the Philippines

It certainly did nothing to lift the spirits of fans half a world away.

Filipinos are still recovering from Typhoon Bopha, cleaning up the damage while searching for survivors; an estimated 600 people have died from flooding and falloout from a storm that’s dragged on for a week.

Many in Pacquiao’s hometown watched on a specially constructed big-screen TV, with hundreds gathering in a great hall to watch together, the Associated Press reported.

“It was like a double blow for me — this disaster and this defeat,” teacher Constancio Olivar told the AP. “We were all crestfallen. Everyone fell silent, stunned. It was like we saw a tsunami.”

The Philippine Star (jokingly?) emblazoned the front page of its website with the headline, “National day of mourning.”

This was Marquez’s first win over Pacquiao in four attempts. The Filipino champ had won two others while they drew a third.

“It’s time for Manny to retire,” one fan wrote at Philstar.com. “He is slowing down and his body could no longer absorb the blows.… Since he entered politics, his performance in the ring declines. We could no longer see him knock down his opponent. This is to say that we cannot serve two masters at the same time.”

Pacquiao won a congressional seat in the Philippines two years ago to accompany the eight boxing championships in his career.

Before the fight, failed US presidential candidate Mitt Romney and his wife, Ann, visited Pacquiao in the dressing room and wished him luck.

“Hello Manny. I ran for president. I lost,” Romney said, according to Reuters.

“I wish you good luck tonight.… Have a great night. Good to see you.”

The internet reacted to Pacquiao's defeat with some sympathy, a lot of snark, and a new meme:

[View the story "Pacquiao loss stuns world... and then comes the snark" on Storify]