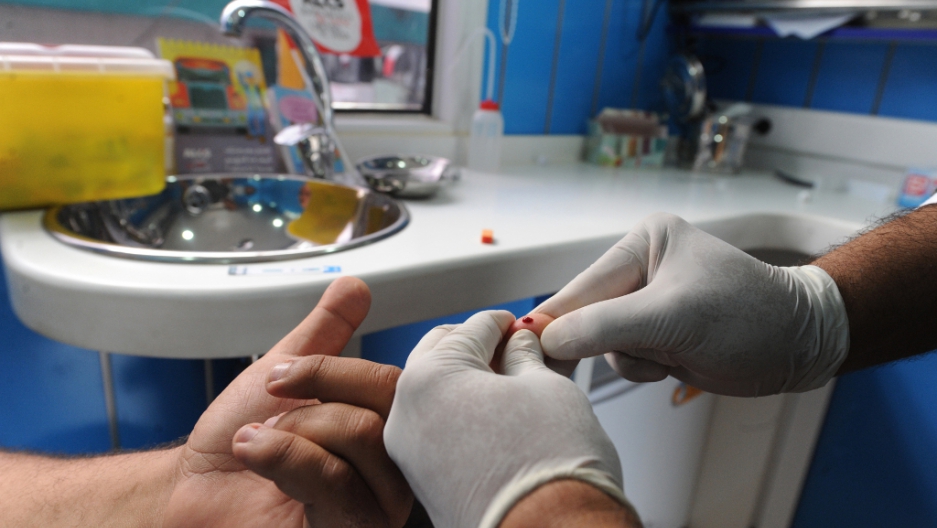 Medical personnel checks the finger of a volunteer, who takes part in a AIDS and HIV Testing organized by the community of volunteers, friends and supporters of the ALCS (Moroccan association against AIDS) at Oulad Ziane bus station in Casablanca on March 24, 2010.
Credit: Abdelhak Senna
Share

CAIRO, Egypt — The Middle East and North Africa region has long had one of the world’s lowest HIV prevalence rates.

But that could be changing.

According to the UNAIDS 2012 Global Report, the region is one of just two areas where HIV infection rates continue to grow — and where antiretroviral treatment is the least accessible due to traditional societal stigma and intransigent authorities.

For most governments in the region, AIDS is a foreign-borne disease, a problem that creeps into their societies from the outside through migrant workers, tourists, prostitutes and drug users.

AIDS activists and health practitioners here say if the region’s governments don’t face up to the problem and implement new policies that tackle local infection rates soon, things will get worse.

“People are becoming more sexually active with no proper education or awareness,” said Johnny Tohme, a social worker with Marsa, the only Lebanese clinic that offers free HIV testing. Between 1,500 and 3,500 people are living with HIV in Lebanon today, according to figures from Marsa and UNAIDS.

“And with the growth of new infections, if no proper-follow up is administered, the infection is going to spread faster,” he said.

The Arab-wide picture is just as bleak. The Middle East and North Africa maintain just one percent of the world’s HIV caseload, with approximately 300,000 adults and children living with the virus, according to the United Nations.

But the fatality rate for AIDS patients has increased significantly in recent years, while in most of the rest of the world deaths have either stayed the same or dropped.

The United Nations says the region is the only one that has yet to see a reduction in the number of children newly infected with HIV each year. The Middle East also had the lowest percentage of infected pregnant women receiving antiretroviral treatment to prevent transmission to their unborn children.

AIDS prevention workers chalk-up the grim statistics to a number of factors.

Like elsewhere, the infection appeared first among intravenous drug-users, homosexual men and sex workers in urban areas before spreading to the wider community. But stigma and discrimination are at the forefront of weak AIDS treatment and prevention programs across the region, where many people don’t discuss it or blame the victim for high-risk and “immoral” behavior, doctors here say.

“When a person is stigmatized, they suffer from low self-esteem and are more likely to engage in higher risk behavior,” which could spread the disease further, Tohme said.

For women, conservative cultural norms complicate at best and hinder at worse their access to already decrepit or sometimes non-existent sexual health education and services, including HIV treatment. Health services for young people, which constitute the largest age group among Arab populations, are also limited.

“We are very poorly treated. People are frightened of us,” said one 50-year-old Egyptian AIDS patient, who agreed to the interview on the condition his name not be used. He was diagnosed HIV-positive 25 years ago after promiscuous “sexual relations” in his youth, he said.

“Some doctors still even refuse to treat us or deal with us, and that makes things difficult,” he said.

Governments aren’t helping either. Despite the 2011 launch of the Arab AIDS Initiative, a program announced by Arab health ministers to scale-up HIV response, regional states have some of the lowest government spending rates for AIDS treatment and prevention programs, according to the United Nations.

Of the 20 countries that deport people once they are diagnosed with HIV, 11 are in the Middle East and North Africa, and some maintain a blanket ban on HIV positive travelers.

In the member countries of the Gulf Cooperation Council (GCC), a regional bloc on the Arabian Peninsula, migrant workers diagnosed HIV positive in one country are then labeled “permanently unfit” for work in other GCC nations.

As a result, “people feel stigmatized for seeking testing services,” said Saja Michael, a voluntary counseling and testing coordinator at Lebanon’s Marsa organization. “It’s important to emphasize the anonymity and confidentiality of such services.”

Mohamed Al Borgi, a health practitioner for Hemaya, an Egyptian AIDS prevention and awareness group based in Alexandria, said on World AIDS Day in Egypt on Dec. 1, no one talked about AIDS.

“There were no government awareness campaigns — nothing,” he said. “If anything, our government impedes awareness of the disease.”