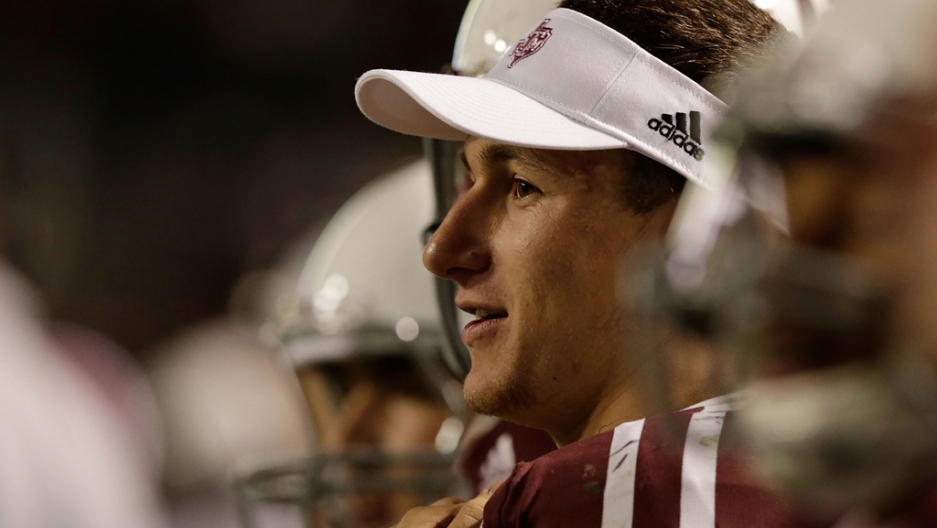 Johnny Manziel of the Texas A&M Aggies watches from the sideline during a game against the Missouri Tigers on November 24, 2012, in College Station, Texas.
Credit: Scott Halleran
Share

Texas A&M quarterback Johnny Manziel made football history on Saturday night in New York City when he became the first freshman to win the Heisman Trophy.

''It's starting to become more of a trend that freshmen are coming in early and that they are ready to play. And they are really just taking the world by storm.''

Regardless of who won, it was going to become a first for someone: a first for Kansas State versus the first freshman or the first true defensive player to ever win the highest honor in college football.

Klein would have been the first Kansas State Wildcat to win the Heisman Trophy. He passed for 2,490 yards and 15 touchdowns and rushed for 890 yards and 22 touchdowns this season.

The senior holds the record for most rushing touchdowns in two seasons, totaling at 49 between 2011 and 2012. Klein ranks second in Kansas State history for scoring with 336 points and third in career yards with 7,028.

He also won the Johnny Unitas Award as top senior quarterback in the NCAA.

Manziel becomes the first-ever freshman Heisman Trophy winner. The 20-year-old quarterback passed for 3,419 yards and 24 touchdowns. He also rushed for 1,181 yards and 19 TDs.

He’s the first quarterback in SEC history, and only the fifth player ever in the NCAA, to have 3,000 passing yards and 1,000 rushing yards in the same season. Upon surpassing 4,600 yards, he set a new SEC record for total yards in a season.

“It’s just surreal, that’s the best way I can describe it,” Manziel said of the nomination.

Te’o would have been the first true defensive player to ever win the award, joining seven previous Notre Dame players as a Heisman Trophy winner. This season, Te’o helped lead the Fighting Irish to an undefeated season with 101 tackles; he ranks third in Notre Dame history for career tackles at 427.

Te’o amassed a school-record seven interceptions in his third-straight 100-plus tackle season.

The Irish will face the Alabama Crimson Tide for the national championship.

"When I decided to come back, it was just to get better, improve my own game, just enjoy the experiences and memories I could create with my team and my family," he told the Chicago Sun-Times.