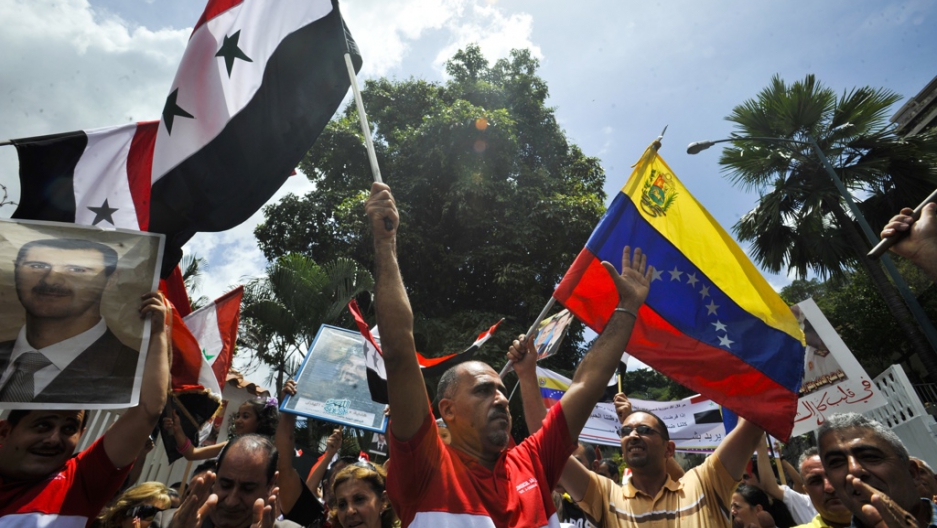 Demonstrators wave Syrian and Venezuelan flags and hold a picture of Syrian President Bashar al-Assad in front of the Syrian Embassy in Caracas, Venezuela on April 1, 2011.
Credit: Leo Ramirez
Share

LIMA, Peru — Syrian President Bashar al-Assad might want to think twice before fleeing to Latin America with his family.

He is reported to have sent his deputy foreign minister, Faisal al-Miqdad, on a trip to Cuba, Ecuador and Venezuela to sound out their respective leaders about the possibility of asylum.

All three countries have left-wing governments that are, to varying degrees and in different ways, antagonistic toward the US.

The most likely destination for the Syrian despot would appear to be Venezuela. Its President Hugo Chavez recently described Assad as his country’s “legitimate” leader.

That remark came despite the fact that Assad was appointed by his late father and Syria’s previous unelected leader, Hafez al-Assad, and has spent the last two years presiding over a massacre of thousands of his compatriots as they fight to topple him.

Cuba could be another real possibility. After half a century of cold war with Washington, the Caribbean island might feel it has little to lose by offering Assad an escape route from a similar fate to that of Libyan strongman Muammar Gaddafi.

Meanwhile, Ecuador is already locked in a face-off with the US, UK and Sweden after granting asylum to WikiLeaks' founder Julian Assange.

Now holed up in a tiny room in Ecuador’s embassy in London, Assange faces questioning over alleged sex crimes in Scandinavia and, he claims, potential extradition to the US for trial over leaking classified documents.

Yet it is far from clear whether any of those three governments would actually want to offer refuge to Assad.

And even if one of them did make that controversial move, they would likely be offering Assad no more than temporary respite from a potential high-profile trial for crimes against humanity.

In Venezuela, Chavez was re-elected in October but the odds of him actually seeing out his new six-year term appear increasingly long.

In the final weeks of the campaign, the former army officer seemed to be in full remission from the cancer that had seen him shuttling to Cuba for radiotherapy several times during the previous year.

Yet, he appears to have sickened again since his election triumph and is now returning to Cuba for more treatment, prompting speculation that his remarkable recovery was the result of the temporary use of steroids and other unsustainable drugs.

Should Chavez die in the first four years of his six year term, Venezuelan law requires a presidential election to be held within 30 days.

Given the lack of an obvious Chavez heir and the strong campaign run by challenger Henrique Capriles, who argues that Venezuela should be allying itself with “democracies” rather than the likes of Iran and Syria, asylum for Assad in Caracas today could easily lead to the dock tomorrow, either back in Damascus or in the International Criminal Court in the Hague.

Meanwhile, Cuba’s leader, Raul Castro, is now 81 and the regime he heads has been in power since 1960. As the world passes Cuba by — most Cubans have never even used the internet — the day must surely be nearing when the country transitions out of the shadow of Raul’s older brother, Fidel.

And that begs the question of whether Raul Castro would even want to grant asylum to the cornered Syrian autocrat.

The Cuban leader appears more pragmatic than his senior sibling who, for all his nose-thumbing at the US, never stooped to anything as low as offering refuge to a man quickly moving up the rankings of history’s greatest mass murderers.

That leaves Ecuador, and its obstreperous, wildly popular president, Rafael Correa, purveyor of some of the region’s most sophisticated anti-American rhetoric.

Correa has, in the recent past, booted out the US ambassador and delighted in facing down Washington and London over the fate of Assange.

Yet the former economics professor in charge of Ecuador is nothing if not a canny operator. And there is a vast qualitative difference between putting up WikiLeaks’ vain self-publicist and Assad, his hands stained with blood and, with the exception of the governments in Venezuela, Iran, Russia and China, facing universal condemnation.

Latin America has a long tradition of providing shelter to those facing persecution, justly or unjustly, in their homelands.

Yet a more appropriate analogy for Assad’s possible Latin American escapade might be that of the wave of Nazis who fled to South America, with or without the blessing of the local authorities, as the Third Reich crumbled around them.

Many spent the rest of their lives in hiding, constantly looking over their shoulders for Mossad assassins, and dying lonely, anonymous deaths.

But the most famous of them all, former SS officer Adolf Eichmann, was seized by Israeli agents in 1960 from his home in Argentina. He was eventually tried and hanged for helping orchestrate the Holocaust.

With some 20,000 Syrians dead as a result of the stricken strongman’s desperate clinging to power, a similar sticky ending could surely not be ruled out were Assad to embark on his own Latin American adventure.