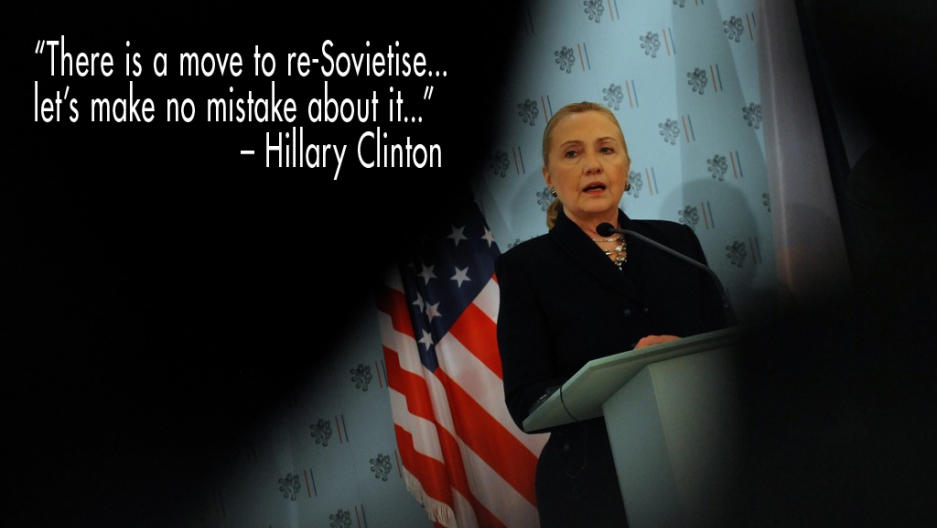 In a sign the United States may be finally changing its line toward Russia, Hillary Clinton has warned that Moscow is trying to recreate a new version of the Soviet Union under the guise of economic integration.

In some of her most critical words yet, the US secretary of state told reporters on Thursday that Washington would fight Russia's effort to boost its influence among its neighbors.

“There is a move to re-Sovietize the region,” she said. “It’s not going to be called that. It’s going to be called a customs union, it will be called Eurasian Union and all of that. But let's make no mistake about it. We know what the goal is and we are trying to figure out effective ways to slow down or prevent it.”

Moscow has rebuffed years of American efforts to improve relations, during which the White House made clear it would not interfere in what the Kremlin sees as its sphere of influence.

But Russian President Vladimir Putin has led a rise in anti-American rhetoric since announcing he would run for a third term last year, when he accused Clinton of fanning unrest by organizing protesters in Russia. Since his re-election in march, Putin has enacted a series of repressive laws as part of a political crackdown against his opposition.