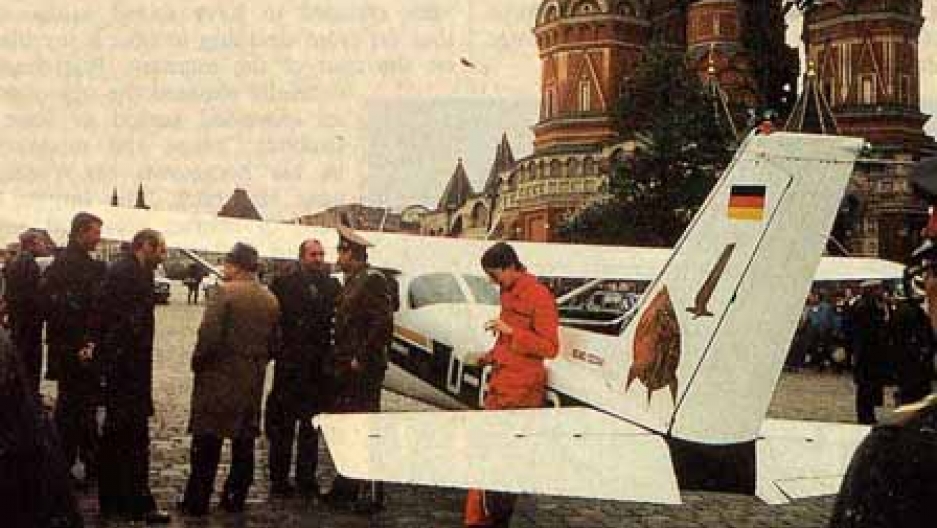 Mathias Rust and his Cessna 172, resting in Red Square after his landing.

Twenty-five years ago Friday, at the height of the Cold War, a Soviet court sentenced 19-year-old West German Mathias Rust to four years in prison.

His crime —flying a single engine plane into Moscow and taxiing into Red Square – made headlines across the globe.

It all began in May of 1987. Rust was fed up with the Cold War tension between the United States and the Soviet Union.

He had a pilot's license, but little experience. So he hopped into a small, single engine Cessna airplane, and told his parents he wanted to bank some flying time.

For two weeks, while he flew around Western Europe, a plan was forming.

"I came to the conclusion that I need to do something that puts an end to this dead end situation," Rust tells the BBC. "I thought I could use this plane to build an imaginary bridge between West and East."

He spent two weeks psyching himself up in Helsinki, and then took off, telling the tower he was going to Stockholm.

Instead, he headed for Moscow, and it wasn't long before he got the attention of the Soviet Air Force.

"I was approached by a Soviet fighter,"says Rust. "It circled around me two or three times, and then it passed very close on the left. I could see the two pilots, and of course the red star on the wing of the aircraft."

Eventually, Rust saw Moscow. At first, he wanted to land in the Kremlin. But then he decided to try to land in Red Square, which was full of people.

So, he landed nearby, and then taxied into Red Square, to the surprise of onlookers.

"I was surrounded by a big crowd of bystanders. Most of them were Russians. And they were standing and smiling at me," Rust remembers.

They asked Rust who he was, why he was in Moscow, and where he had come from.

"I said I was just here to deliver a peace message to Mikael Gorbachev, and that I just came from Germany." The bystanders smiled, and noted that Germany was a friend of the Soviet Union.

"And I said, no, not East Germany. I'm coming from West Germany."

Rust was soon arrested, and convicted of illegally crossing the Soviet Border, and "hooliganism." He was sentenced to four years in prison.

The case caused quite a stir in Russia. For a while, Red Square was jokingly referred to as Moscow's "third airport."

But in the Kremlin, heads rolled. Gorbachev dismissed a number of high-ranking officials.

"Gorbachev was able to replace important officials with men of his favor. I think my flight to Moscow helped bring both sides closer to each other," Rust says.

Mathias Rust only served a little more than a year of his four-year sentence. He was released in 1988 as a "goodwill gesture" by the Soviet Union.

Rust returned to Germany, where he's had legal troubles as well, including convictions for fraud and attempted manslaughter.

He now lives in Hamburg, Germany. He describes himself as a financial analyst…and yoga instructor.

By the way, Rust got his own anthem, of sorts, back in 1987 from a West German band called Modern trouble. Enjoy.