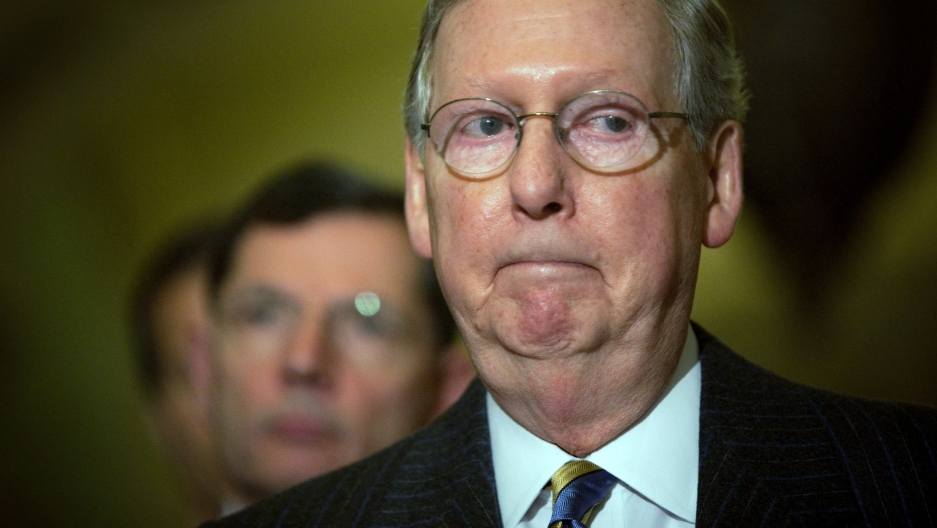 Senate Minority Leader Mitch McConnell, a Republican of Kentucky, stands with Senate Republicans to address the media after their weekly policy luncheon in the US Capitol building on March 6.
Credit: Allison Shelley
Share

Senate negotiations took a strange turn on Thursday when Republican Minority Leader Mitch McConnell was forced to filibuster a vote that he had called for himself.

It started when McConnell demanded an up or down vote on a measure that would allow the president to have more authority in raising the debt ceiling.

According to the Huffington Post, McConnell was betting that some Democrats would vote against the move, "which would have allowed McConnell to portray President Barack Obama's desire for such authority as something even Democrats opposed."

He also hoped it would show disunity among Democrats.

But Democrats soon realized a way to turn the tables and decided to call McConnell's bluff, saying that voting for a permanent solution to the debt ceiling was the fiscally responsible thing to do.

“Our downgrade of America’s credit rating was not based on the state of our economy but the debt-ceiling debate,” Sen. Dick Durbin (D) of Illinois told the Christian Science Monitor after the vote.

“We are paying dearly for that already. So the Republicans are creating a situation which makes reducing the debt and deficit extremely difficult by creating this uncertainty about the debt ceiling.”

McConnell was forced to turn around and say "I object," filibustering his own suggestion.

"What we're talking about here is a perpetual debt ceiling grant, in effect, to the president, " McConnell said. "Matters of this level of controversy always require 60 votes."

Sixty votes are required to end a filibuster during debate on a bill and to hold a vote.

Democrats seized on the irony of the situation and used the opportunity to call for reforms of the filibuster process.

"I don't know how the Republicans can say they're not abusing the filibuster after what we saw on the floor today," Sen. Dick Durbin (D-Ill.) told the Huffington Post.

"It's somewhat comic, but sad as well, that we've reached the point where Sen. McConnell will not even accept a majority vote on his own measure."

According to the Washington Post, Thursday's vote was the first major test of whether Democrats will remain united behind the idea that the President should control the debt ceiling rather than Congress.

The debt ceiling is about to make another big appearance after the 2011 debate that brought the government a breath a way from its first-ever default.

The proposal that McConnell ended up filibustering in fact originally came from the president, reported the Christian Science Monitor. President Barack Obama essentially asked the Treasury Department for the power to raise the debt limit without interference from Congress, the newspaper said.

The Monitor reported that under this proposal Congress would have 15 days to pass a joint resolution of disapproval. The president could then veto their disapproval and require Congress to override his veto with 60 percent majorities in both bodies.