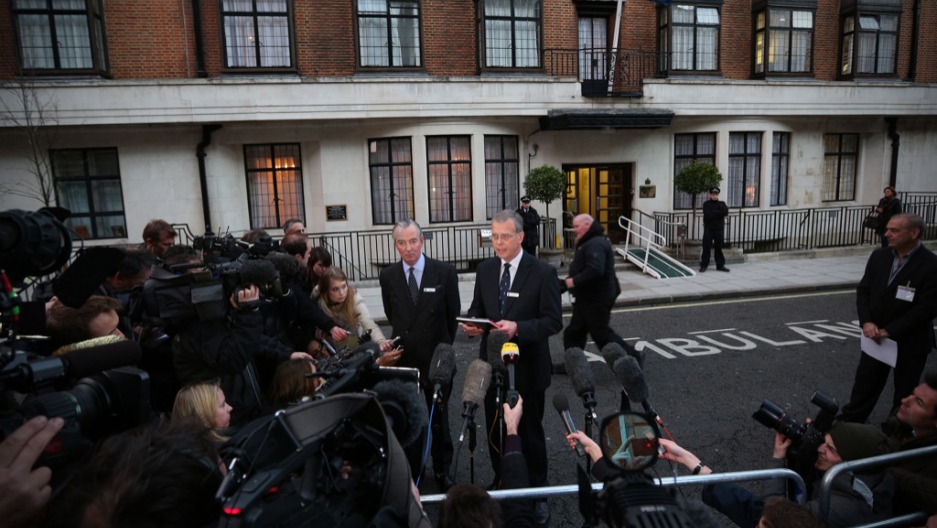 King Edward VII hospital chief executive John Lofthouse (CR) standing next to the hospital's chairman Simon Arthur (CL) speaks to the media outside the hospital in London on December 7, 2012 after nurse Jacintha Saldanha who answered a hoax call was found dead at a property close by.
Share

The Duke and Duchess of Cambridge said they were "deeply saddened" by the death of nurse and mother-of-two Jacintha Saldanha who committed suicide days after she transferred a prank call from an Australian radio station.

A Palace spokesman said Kate Middleton and Prince William had not made a complaint about the hoax call nor about hospital staff, the London Mirror reported.

"Their Royal Highnesses were looked after so wonderfully well at all times by everybody at King Edward VII Hospital, and their thoughts and prayers are with Jacintha Saldanha's family, friends and colleagues at this very sad time."

The royal statement came as management at King Edward VII's Hospital confirmed Saldanha was "recently the victim of a hoax call to the hospital".

"The hospital has been supporting her at this difficult time," the statement continued.

The Daily Mail reported the hospital had not been disciplining Saldanha over the incident which occurred two days ago when she transferred a call from the switchboard to the ward where Kate Middleton was being cared for.

Staff spoke of a "first class nurse" who had worked at the hospital for more than four years.

Married with two children, Saldanha was "an excellent nurse and a well-respected and popular member of staff with all her colleagues", a statement read.

Speaking outside the hospital to waiting media, John Lofthouse, Chief Executive at King Edward VII’s Hospital, said: "Our thoughts and deepest sympathies at this time are with her family and friends. Everyone is shocked by the loss of a much loved and valued colleague."

Following the prank call two days ago, the two Austrailan radio presenters, Mel Greig and Michael Christian from 2Day FM, had bragged how easy it was.

The Mirror said they were yet to make a statement about Saldanha's death.