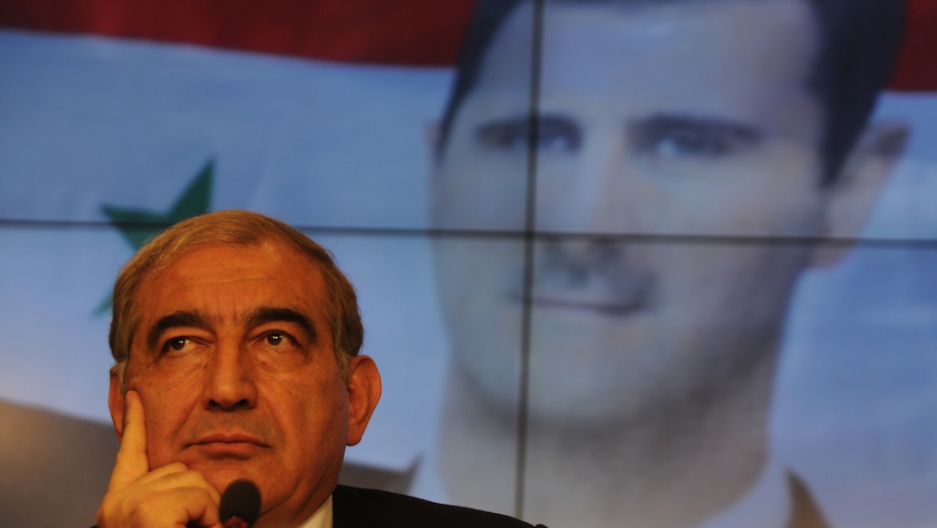 Syrian deputy premier Qadri Jamil looks during a press conference in Moscow on August 21, 2012, with a picture of Syrian President Bashar al-Assad in the background. Jamil dismissed as mere election politics US President Barack Obama's implicit threat to launch an attack should the regime deploy its chemical weapons stockpile.
Credit: ANDREY SMIRNOV
Share

US officials told NBC news on Wednesday that they believe the Syrian military is prepared to use chemical weapons against its own people.

Concerns that Assad may order the use of chemical weapons has escalated in recent days with reports that the weapons were being moved inside Syria, and most recently, that chemicals used to produce sarin gas, a deadly nerve agent, were being loaded into bombs.

For months, US President Barack Obama has stated that the movement or use of chemical weapons inside Syria would be a "red line" for possible US military involvement in the conflict.

"We have been very clear to the Assad regime, but also to other players on the ground, that a red line for us is we start seeing a whole bunch of chemical weapons moving around or being utilized," Obama told reporters during a press conference in August, according to a transcript of his remarks. "That would change my calculus. That would change my equation."

Obama added, "We cannot have a situation where chemical or biological weapons are falling into the hands of the wrong people."

In July, the Syrian government appeared to admit to possessing chemical and biological weapons.

According to the BBC, the government said the weapons would "never be used in the Syrian crisis, no matter what the internal developments," but that they might be used in the case of "external aggression."

Multiple international conventions prohibit the use of chemical and biological weapons — frequently described as "weapons of mass destruction" — and yet they remain a potent threat in some unstable environments.

What exactly are these weapons, and why are they so dangerous? GlobalPost looked up answers to some common questions.

What is a chemical weapon?

A chemical weapon is a "toxic chemical contained in a delivery system, such as a bomb or shell," according to the Organisation for the Prohibition of Chemical Weapons. The organization notes that the Chemical Weapons Convention, however, defines them more generally as "any toxic chemical or its precursor that can cause death, injury, temporary incapacitation or sensory irritation through its chemical action." Chemicals that fit this description but that also have routine industrial use are only considered weapons if they are "produced and stockpiled in amounts that exceed requirements" laid out in the Convention.

The bombs and shells used to deliver chemical weapons are also considered weapons in their own right.

Which chemical weapons does Syria have?

A 2008 paper put out by the Center for Strategic and International Studies said that Syria is believed to possess mustard agents — also known as "blistering agents," for the burn-like wounds they cause — and nerve gas. Nerve agents are "organo-phosphorus" chemical compounds that can be absorbed either through inhalation or contact with the skin, according to the OPCW.

Syria is believed to have cluster warheads that can deliver chemical weapons, according to CSIS, and the country may also have chemical bombs, rocket warheads, and chemical artillery shells.

What governs the use of chemical weapons?

International conventions including the Chemical Weapons Convention and the Biological and Toxin Weapons Convention (full name: The Convention on the Prohibition of the Development, Production and Stockpiling of Bacteriological (Biological) and Toxin Weapons and on Their Destruction) prohibit the use of chemical weapons. Scott D. Sagan, a political science professor at Stanford, wrote in a 2000 book chapter that "the use of both chemical and biological weapons is now deemed illegal by the international community, and any state that violates this norm is likely to face significant international opprobrium."

The OPCW, headquartered at the Hague, is the body responsible for implementing the Chemical Weapons Convention. Though the OPCW is an independent organization, it works in formal cooperation with the United Nations toward the prohibition of chemical weapons.

According to crimesofwar.org, a private, non-profit website that seeks to explain international humanitarian law, the 1925 Geneva Protocol allowed countries "to develop and stockpile chemical weapons for 'defensive' purposes," though it banned “first use” of the weapons. Conventions since have been much more strict.

The heart of the 1997 Chemical Weapons Convention, according to crimesofwar.org,

"is that each State party undertakes never, in any circumstances, to develop, produce, otherwise acquire, stockpile, or retain chemical weapons, or transfer them directly or indirectly to anyone; never to use chemical weapons or engage in any preparations for doing so; and never to assist, encourage, or induce, in any way, anyone to engage in any activity prohibited by the treaty."

For more, watch GlobalPost's Middle East Editor Peter Gelling size up the threat of chemical weapons in this August interview: