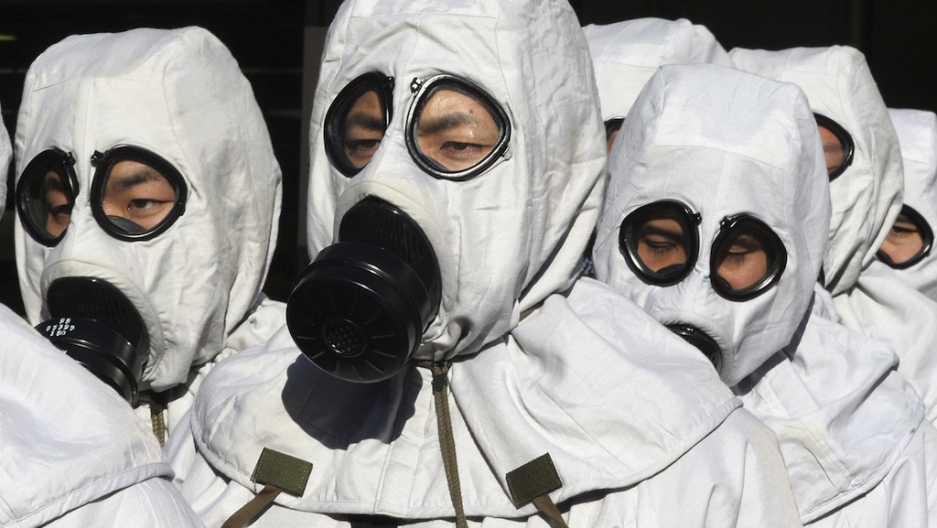 Men in chemical protection suits participate in a joint anti-terrorism drill in Japan. The drill was conducted amid increased terrorism concerns was based on the scenario that Sarin was dispersed at a station.
Credit: Junko Kimura
Share

Yesterday, a US official told NBC News that Syria has begun to mix the chemical components of sarin gas, and has loaded the deadly nerve agent into bombs on or near airfields.

The gas was developed in Germany in 1938 by two scientists who were trying to create a stronger pesticide. When its potential for chemical warfare was realized during WWII, Germany started mass-producing the gas, but ultimately decided not to use sarin against the Allied targets.

In the early 1950s, NATO recognized sarin as a standard chemical weapon and both the USSR and the United States began producing the gas for military purposes. It was never used, and production of the gas ceased in the US by 1956.

According to the CDC, sarin is odorless, so most victims have no idea that they were exposed to the gas. Within a minute of exposure, people experience runny nose, tightness in the chest, and pupil constriction. After several minutes, they began having difficulty breathing, become nauseated, and start to drool. Soon they lose control of their bodily functions, begin twitching and ultimately suffocate in a series of convulsive spasms.

The first known incidence of sarin being used as part of chemical warfare occurred in 1988 in the Kurdish city of Haljaba, in northern Iraq. Close to 5,000 people died over the course of two days after 20 aircraft dropped chemicals on the town. According to the BBC, Saddam Hussein's forces may have used mustard gas and cyanide along with the nerve agents sarin, tabun, and VX.

Sarin was also used in two terrorist attacks by Aum Shinrikyo in Japan in 1994 and 1995. The first attack, occurred in the city of Matsumoto on the evening of June 27 and the morning of June 28, 1994. Eight people were killed and over 200 were harmed by an impure version of the gas, which was released from several sites in the Kaichi Heights area of the city.

Nine months later, Aum Shinrikyo carried out a similar attack on the Tokyo subway system. Thirteen people died and fifty others were injured in the attack. After the attack, Aum Shinrikyo lost its status as a religious organization in Japan, and many of its assets were seized.

Sarin gas was also alleged to have been used in 2004 during the Iraq war, and was used as evidence of the banned weapons of mass destruction the US government claimed Iraq possessed.

More from GlobalPost: How to survive a chemical attack