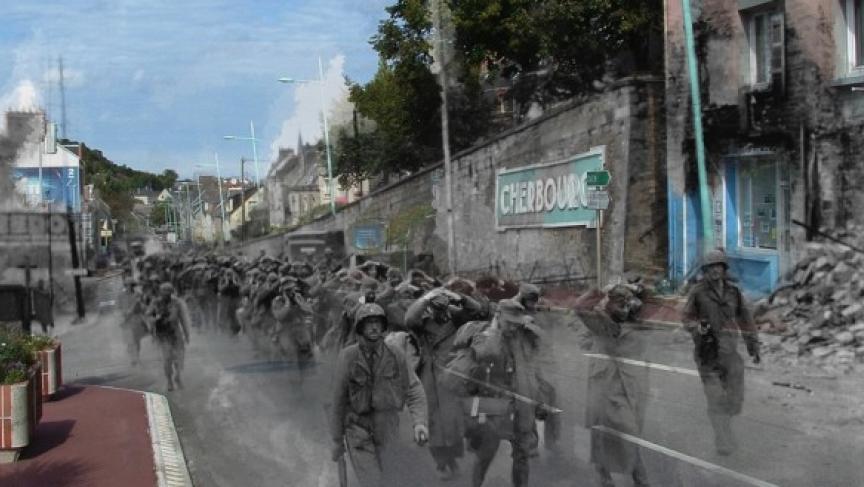 The Ghosts of History Series

Share
"History's always been interesting and magical to me, even as a little girl," says Jo Hedwig Teeuwisse. "I've always had this magical idea what happened in my street before I was born." Teeuwisse, who was born and raised in The Hague in the Netherlands, has made her passion her profession. After attending film school, she started a "historical consultancy" business. She helps museums, and TV and film productions get the feel and flavor of history just right. And that means having a keen eye. Back when she was a student, Teeuwisse spotted a bunch of old negatives at an Amsterdam flea market. She decided to spend her dinner money on the negatives. "I chose history over food. It wasn't really a hard choice," she says. The negatives, Teeuwisse says, were all in folders, and those folders were full of notes and comments. "Whoever made those photos wrote down a lot of information, except his name. It's a little bit like a mystery. And I'm an extremely curious person, especially when it comes to history, so I wanted to find out more about the family where these photos were coming from." It turns out there were more than 300 black and white shots from the last years of World War II, 1944-45. The shots detailed daily life in Amsterdam and other parts of Holland. Teeuwisse thought she recognized some of the locations. So, she went to try to find them, and photograph them. One of the old negatives was a photo of factory workers sitting on some steps in Amsterdam. "While I was researching the area, I suddenly saw these steps," Teeuwisse says. "And I thought these can't be the same steps where the people are sitting on." "I took a picture, and back home, I thought, 'Well, maybe they are, they're so similar.' So, not for fun but as a proper history tool, I had to overlay them and compare them. And then I realized it's exactly the same set of stairs." And that's how the Ghosts of History project got started a few years ago. Teeuwisse started taking the negatives, and then mashing them up with modern day photos of the same location. A particularly striking one shows Dam square in full-color, modern day Amsterdam. As your eye travels up, though, the colors fade and and you see a huge SS placard in black and white on a building. In the background, that past gives way again to a McDonald's sign. Teeuwisse put her mashed-up photos online, and then kind of forgot about them. Then, on the photo-sharing site Flickr, she came across a set of World War II era photos from Normandy, side by side with modern day photos of the same locations. She asked the owners of the photos if she could mash them up, and they agreed. Suddenly, a modern day French crosswalk teems with Allied soldiers running to avoid gunfire. A dead German soldier rests against a modern doorstep. "He died on someone's doorstep," says Teeuwisse, talking about how and why her photos strike a chord. "That could be yourdoorstep. Teeuwisse's built up quite a community of followers for Ghosts of History on Flickr and Facebook. She says people from all over the world contact her about potentially usable photos, and that she gets notes from teachers saying they like using her photos in class. "Even if children don't know anything about World War II, or even if they don't care, they are sometimes still fascinated by the pictures, because it's the same magic realization that I had as a little girl – history is here, it's where you are. It's all around us, and that hits a nerve." By the way, despite years of sleuthing, Teeuwisse still hasn't found out the name of the person who took the original photos she bought at the flea market. And as for the some of the soldiers in the pictures? Well, no luck identifying them either. Although she has received some messages from Canadians saying that their fathers might be in the photos, that they helped liberate that part of the Netherlands during 1944 and 45. By the way, Teeuwisse's not the only one who has caught the history bug with online photos. Shawn Clover's doing something similar with 1906 San Francisco earthquake photos. There's also a Tumblog called Dear Photograph that let's you do the mash-up of past and present. And for your smartphone, there's an app called Historypin.