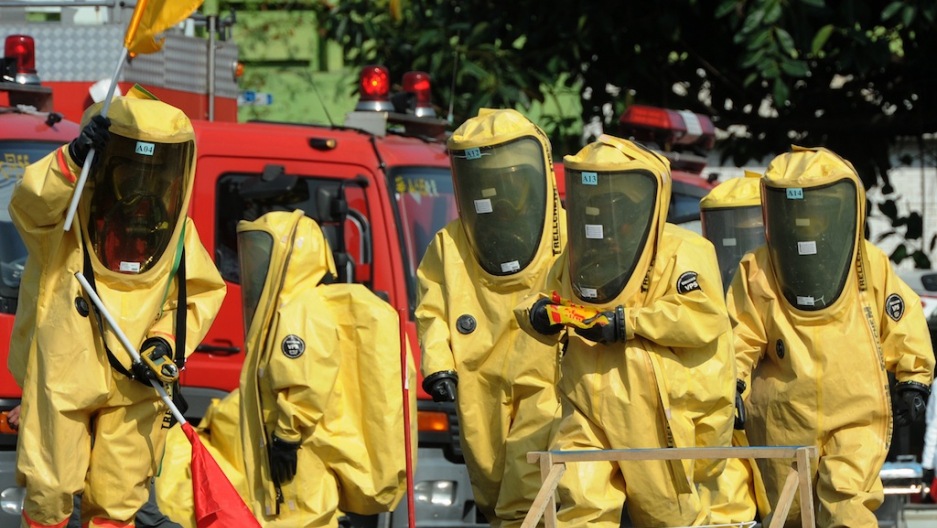 Syria's military may be gearing up to launch a chemical attack against its own people, according to US officials.

While it may be a horrific thing to fathom, it is also a crucial situation to be prepared for. Here, five ways to survive a chemical attack.

More from GlobalPost: Why chemical weapons are so dangerous

Syria is believed to have access to mustard agents and nerve gas, including sarin warheads. If released inside a building, the first thing to do is simple: get out. However, it is possible that the chemicals will be released into open air, in which case, you should climb to the highest point. Sarin, and several other chemical gases, are denser than air, which means they will sink low to the ground, the Center for Disease Control and Prevention explains.

2. Take off your clothes and dispose of them.

Chemicals will cling to clothing; its important to get that off your body as quickly as possible. WikiHow recommends cutting off clothes if you're able, to avoid any further contact with your hands or face. Get those into sealed plastic bags and keep them away from others.

Wash your skin with soap and water, or hand sanitizer. If your eyes burn, CDC advises rinsing them with just water for 10 to 15 minutes.

Things to put on, if you can get to them? Plastic gloves, goggles or glasses, and a gas mask. Another way to protect your lungs is to urinate on a cotton pad or cloth, as soldiers were advised during World War I — it will neutralize certain gases.

However, according to Robert Johnson, the Military & Defense Editor at Business Insider, there's only one way to guarantee survival: Mission Oriented Protective Posture, in which US soldiers are trained. The procedure involves a full body "two-piece snow suit filled with activated charcoal," as Johnson describes it, including gas masks and rubber gloves.

A chemical attack could grind daily life to a halt. WikiHow suggests taking out a good amount of cash, stocking up on necessities like canned goods and water, and making a contingency plan about where to find family members in the event of separation.

It sounds obvious (and also impossible). But panicking causes you to inhale more air faster, move quickly, and make rash decisions. Panic also spreads like wildfire in a group, and the more people become agitated, the worse off you'll be.

As retired military weapons, munitions, and training expert Red Thomas writes, "your defense is as always to not panic."

The mere idea of a chemical weapons attack is enough to freeze the bravest in their tracks, but channeling relaxation is your best bet to make it out alive.

More from GlobalPost: Sarin gas: The deadly chemical weapon Syria might be ready to use