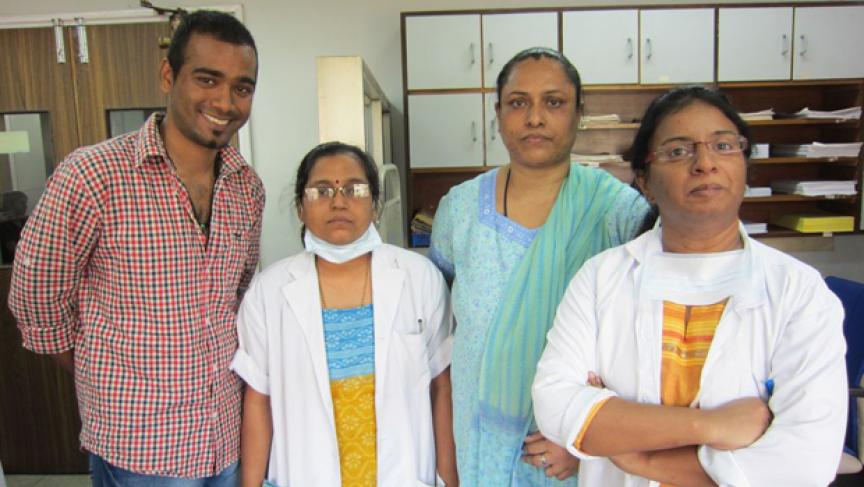 A medical team at Tata Memorial Hospital in Mumbai, India, poses with a woman who has just tested negative for cervical cancer, and with her son who brought her in for screening. (Photo by Joanne Silberner.)

Editor's note: This story is part of a special series on Cancer's New Battleground: The Developing World. View more stories and multimedia from this series at TheWorld.org/Cancer.

Cervical cancer used to kill more women in the United States than any other cancer. Today, deaths from cervical cancer in the U.S. are almost unheard of thanks to a decades-old test called a Pap smear, which allows for early detection and treatment.

In India, however, tens of thousands of women still die each year from cervical cancer.

“It’s just not possible for us to provide (the Pap test) as frequently as it is done in the West,” says Dr. Surendra Shastri, a cancer specialist at Tata Memorial Hospital in Mumbai.

The Pap test requires trained personnel and well-equipped labs, which many parts of India do not have.

It turns out there may be a simple answer. It’s a cheap and easy test developed by scientists at Johns Hopkins University and other institutions. And it relies on something you probably have in your kitchen.

In the village of Dervan in the Indian state of Maharashtra you can see how the test works.

Doctors had set up a temporary clinic in the shell of an empty store. A sheet hung from the ceiling to provide some privacy. There was no electricity — not even a light bulb — in the storefront.

About a dozen Muslim women in headscarves had come for the test. One was on the exam table, her long brown skirt pushed aside. With her friends sitting nearby, she looked calm and ready.

Dr. Archana Saunke took a cotton swab and applied a clear liquid to the woman’s cervix.

“We wait for one minute, and we see if there is any patch — yellowish patch,” she explained.

If the liquid makes the normally pink cervix turn white or yellow, that means there are precancerous cells — cells that could become cancer.

Within a minute or two, the doctor had some good news for her patient.

When tests yield bad news and show precancerous cells, those can be removed on the spot with a squirt of liquid nitrogen. No return trip is needed.

So what is this clear liquid Dr. Saunke applied?

The tests being done here are part of a trial program being run by Tata Memorial Hospital and Walawalkar Hospital, where Dr. Suvarna Patil is medical director.

Patil says when the vinegar test was first brought to the villages, women were not interested, even though it was free.

“Whenever we used to go to their houses, they used to shut the doors. They would say, ‘No, we don’t want (it). You go away,’” Patil says.

Patil says many women found testing a bother. They were embarrassed to have a vaginal exam, and for what? They didn’t think cancer could be treated.

India being a country of high- and low-tech solutions, Patil sent out health workers with computers loaded with PowerPoint presentations. They put up posters around town and performed plays. They talked to students in schools and to village leaders.

“Muslim ladies, they will never come because it’s their culture,” she says. “Even Indian ladies, they are very shy. So first what we did is we appointed (an) all-female staff.”

The staff got awareness training. They were taught to test not just for cervical cancer, but also for high blood pressure, dental problems, diabetes, and other diseases women were worried about. Men were also invited for those other screenings — and male support for the program was a key factor for the women.

All that got women in the door. Then it was a matter of time for attitudes to change.

Patil says it made a big difference when women saw other women actually beat cancer.

“Now they are seeing the results, because if the cancer is picked up in early condition, the patient is doing well,” she says. “People are coming to us and telling us, ‘Please arrange a cancer screening camp for our ladies.’ But it took eight years. It was so difficult.”

It is evident that those eight years have paid off.

Back at the temporary testing clinic, Sojata Sanjay Kapril said she was happy she underwent the screening. Her test result was negative, but she said if an abnormality had been found, “then we can cure it.”

The vinegar technique has been adopted in several countries now, and there’s another more expensive test for cervical cancer that some say may eventually prove to be even better.

These tests could save the lives of tens of thousands of women in India each year — as long as women continue to be convinced to use them.

This story was reported with assistance from Mahesh Savale. The series was produced with support from the Pulitzer Center on Crisis Reporting.