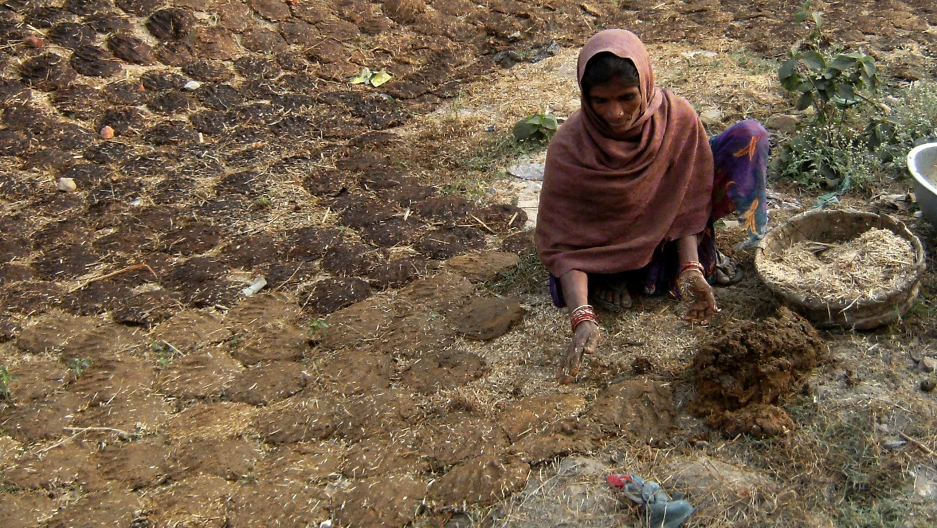 People in rural India, like this woman drying cow dung, are often unable to get adequate nutrition in their diets. (Photo by Tevaprapas Makklay.)

Nearly half of all children under age three in India are underweight.

Some 80 percent are anemic. That means more than 30 million children — the equivalent of the population of Canada — are going hungry.

India has seen more than two decades of rapid economic growth since the country began shifting to free market economic policies. But over the same decades, poor Indians have been eating less food and the food they do eat has grown worse in quality, with fewer vitamins and minerals and less protein.

Bloomberg News reporter Mehul Srivastava's family is from a small village a few hundred miles from Delihi, and he returned there to live, and eat, with a poor family, in order to find out why so many Indians are underfed. And to experience, first hand, what it’s like to live without enough food.

"It was amazing," he said. "It was, in a way, like going back in time, because not much has improved there. They have some electricity, they have some running water, but their diets have actually gotten worse."

Srivastava gave the family the equivalent of 50 cents per day, and, in exchange the family was happy to add him to their meals. For some two weeks, he ate all his meals with that family.

They were meager meals, he said, primarily dry foods like roti, a bread made from some of the coarsest wheat. It has less nutritional value than we Americans are used to — and it certainly doesn't taste very good, Srivastava said. That was complemented with a sort of gruel.

The poor nutrition has concrete costs as well, in that the children and adults in the village are smaller than they should be.

Many of the children are suffering from a disease common among those who don't have enough protein in their diets. They have the sort of loose skin that immediately says something isn't right.

Srivastava said this often occurs because the mother has another child soon after and so the first child has to stop breast feeding and is moved onto a diet that has poor nutritional value — and is especially short in protein.

"It causes a lot of water to be stored in the body. It causes distended bellies and the skin becomes very dry and rough to the touch," he said.

For adults, protein is almost non-existent in diets. Because they're typically vegetarian, they'd need high-quality lentils, which just aren't available. And even those who aren't vegetarians, like the family Srivastava lived with, meats, eggs and milk are all expensive — too expensive for everyday meals.

All of that leads to the sort of physical effects that are quickly apparent.

"I was over a foot taller than most of the people there," he added.