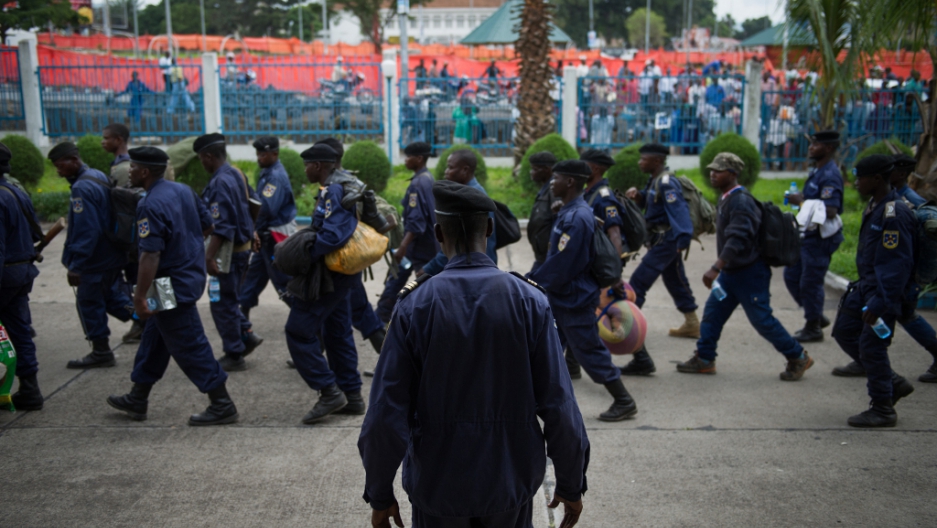 Congolese National Police-officers gather inside the central bank complex in the city of Goma in the east of the Democratic Republic of Congo on December 1, 2012. Hundreds of Congolese M23 rebels began a withdrawal on December 1 from Goma as promised under a regionally brokered deal, after a 12-day occupation of the city.
Credit: Phil Moore
Share

KINSHASA, Congo — The withdrawal of the M23 militia from the city of Goma will not bring peace to eastern Congo. On the contrary, there is ample reason to believe the region will continue to be plagued by periodic outbreaks of violence and displacement, further weakening the national government, traumatizing civilians, and requiring an outsized share of the world’s attention. The reasons for this grim prediction are as follows:

Misrule on a Massive Scale

First and foremost, national sovereignty, like nature, abhors a vacuum. For most of the past 20 years, the Congolese state has been more fiction than fact. Aside from small swaths of downtown Kinshasa and Lubumbashi, the country remains ill served by its elected leaders. Social services are poor to nonexistent, corruption plagues even the simplest of transactions, and the security forces are viewed as yet another predatory militia.

The country’s top military man, General Amisi, was recently accused in a UN report of selling weapons to insurgents and poachers, and although he was suspended from duty, he remains at liberty, not charged with any crime.

According to the widely respected blog “Congo Siasa,” Amisi’s successor “was cited by a UN investigation for using money from the state MIBA diamond mining company to purchase weapons for the army. He has also been accused by local human rights groups of having killed a street child for stealing his phone.” These are the kinds of men tasked with protecting Congo’s territorial integrity from internal and external threats. Its civilian rulers are no better, regularly earning the perversely named Democratic Republic of Congo a place near the bottom of Transparency International’s annual rankings.

There has long been heated debate over the history of Rwandaphones in eastern Congo, both Hutu and Tutsi. This is a discussion unlikely to ever be resolved by logic alone. However, two things are undisputed: modest populations of Kinyarwanda speakers have been present in eastern Congo for centuries; and their numbers grew dramatically during the Belgian colonial period and in mid-1994 with an influx of Hutus fleeing Rwanda. (Kinyarwanda is a dialect of the Rwanda-Rundi language spoken by some 12 million people in Rwanda, where it is the official language. Those who speak it are known as Rwandapones). The reality is that these people are now an integral part of the demographic makeup of the region and have no intentions of leaving, something that many Congolese and their political leaders in Kinshasa have difficulty understanding.

The legal status of the Rwandaphones has been a political football for national governments over half a century, leaving them with a profound anxiety about their place in Congolese society. A 2004 law sought to resolve this by declaring that “any person belonging to an ethnic group or nationality whose people and land were part of the territory that became the Congo (now the Democratic Republic of Congo) upon independence is of Congolese origin.” However, in a profoundly lawless state, it should come as no surprise that the application of the statute remains capricious and fragile. Thus, Rwandaphones, regardless of their ethnicity, remain wary of putting down their arms.

Eastern Congo is spectacularly beautiful, looking more like Ireland than Africa. It has fertile volcanic soils, an ideal climate and genuine tourism potential. Alas, it also has an abundance of precious metals, including gold, tin, coltan, and cassiterite. As elsewhere in Africa, places with the weakest and most venal governance – Sudan, the Niger Delta, war-torn Sierra Leone -- are precisely where the “resource curse” weighs heaviest on the civilian population. Instead of being a source of organized employment, tax revenue, and economic development, illegal mining has resulted in the exploitation of labor, the creation of criminal cabals, and the intervention of greedy neighbors, most notably Rwanda and Uganda.

The Burden of Geography

Many observers date the current troubles in eastern Congo to 1994 when the Rwandan genocide spilled over into the provinces of North and South Kivu. In reality, the east has regularly been plagued by flare-ups of violence since the Simba rebellion and the Kanyarwanda war in the 1960s. The worst of these outbreaks occurred in 1993 during the so-called Masisi war, which cost thousands of lives and resulted in tens of thousands of refugees and internationally displaced persons. In addition, ethnic violence in neighboring Burundi in 1972 and Rwanda in 1973 pushed Rwandaphones across the border into the Congo (then Zaire) adding to existing tensions over land and political power. During the 1998-99 war, eight different African countries invaded, and even today rebels from Uganda and Burundi make camp on Congolese soil. As author Barbara Kingsolver put it in her Congo classic, “The Poisonwood Bible”, “no other continent has endured such an unspeakably bizarre combination of foreign thievery and foreign goodwill.”

Speaking of “foreign goodwill,” what can the international community do about all this? The sad truth is that there’s no silver bullet. Indeed, our best efforts have fallen far short of the mark. Despite fielding the world’s largest peacekeeping force, the UN remains weak and ineffective. Donors, including the Belgians, US and France, have invested millions in reforming the armed forces to almost no effect. Even the dirty elections of 2011 drew little more than a slap on the wrist from Congo’s friends in the West.

Probably our best bet is to continue the long, slow, arduous work of supporting Congolese civil society, that messy mélange of local organizations that do everything from monitoring human rights to empowering women to promoting tolerance. This may not provide a quick fix, but unlike some of the proposals being floated by the punditry – armed intervention, partition, etc. --- it has the twin virtues of being affordable and achievable.

Chris Hennemeyer has lived and worked throughout Africa for the past 25 years, in the international humanitarian and democracy promotion fields, including two years in the Congo.