This health clinic in Cange, Haiti, is run by Zanmi Lasante, a sister organization of the American charity Partners In Health.

Haiti is the poorest country in the Western Hemisphere. Having breast cancer here often means no care at all, or care that’s too costly for any common person to afford, or a lot of initial missteps.

“I felt something in my breast that hurt," says a woman who asked to be identified only by her first name – Merlyn.

She's a big woman in tight braids, with a tough look on her face and a forceful way of speaking. But, she admits, she was scared.

Merlyn says the lump grew so large that it broke through her skin. Her clothes couldn't cover it. Local doctors were no help.

Merlyn eventually got referred a clinic run by Haitians and Americans from Partners in Health, a medical charity that has launched a new push to fight cancer.

“The reason we’re taking it on is similar to the reasons we’ve taken on other illnesses,” says Dr. Sara Stulac, who heads the group’s oncology program. “People are suffering in the countries where we work, and there’s something we can do about it.”

Preparing for the Fight

In the little Haitian town of Cange, Partners in Health's sister organization -- known in the local language (Kreyol) as Zanmi Lasante -- runs a clinic.

The clinic has been setting up cancer treatment rooms, lining up supplies, and training workers on cancer issues. They are focusing on breast and cervical cancers – the most common cancers among Haitian women.

Dealing with breast cancer in a place like Haiti takes effort and compromise.

The effort starts with the patients. When Merlyn showed up at the clinic with advanced breast cancer, she got a mastectomy. Now every two weeks she takes a 12-hour trip on one of Haiti's creaky and overcrowded buses to get to the clinic for chemotherapy.

Merlyn says she is bucking what her neighbors say.

“If you get cancer, people say you’re going to die because there’s no treatment for it,” she explains. “They say even if you see a doctor, you won’t find a solution. That’s the talk.”

The breast cancer statistics for women like Merlyn are grim. 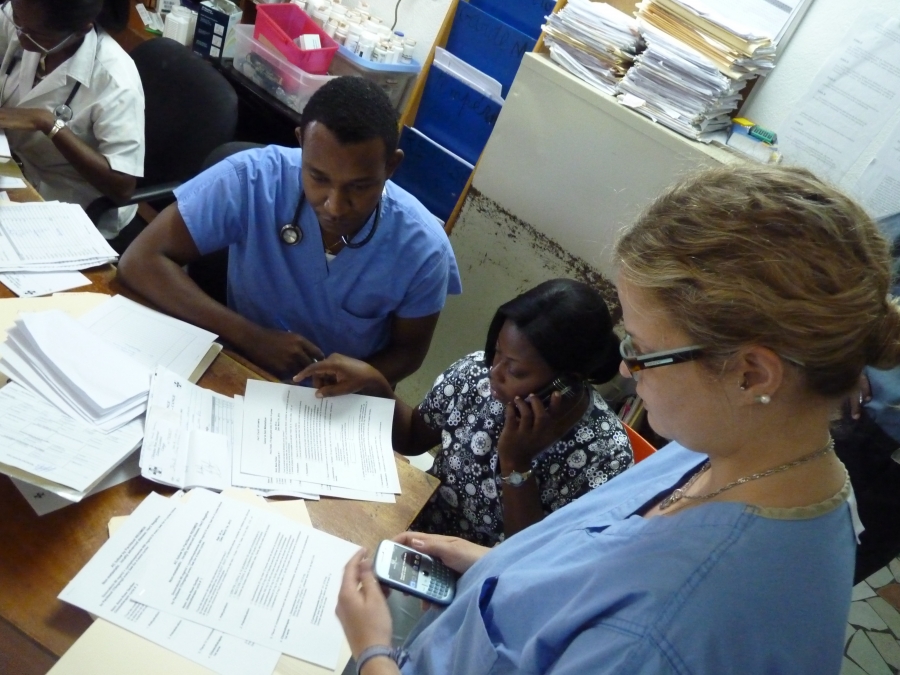 Doctors and nurses prepare the day's rounds of chemotherapy on cancer patients at Zanmi Lasante's clinic.

“I don't have a definite number, but I can say that it's very bad,” says Dr. Ruth Damuse, who is heading the oncology efforts at Zanmi Lasante. “Like half of the women, they will die.”

Damuse says the biggest problem is women coming in late, long after they’ve noticed the initial lump. And a lot of women don’t come in at all. So Damuse takes every opportunity to preach early diagnosis.

On International Women’s Day, Damuse traveled a few towns over from her clinic to attend a rally and teach-in. Several hundred women sat in the large lobby of a new hospital that was under construction.

Damuse took the podium and asked the crowd a question: “Which cancer most affects women?”

The crowd murmured. No one knew the answer.

On two screens flanking the podium, Damuse showed pictures of breast cancer patients like Merlyn, with tumors coming out of their chests. She told the women how to check themselves for suspicious lumps. She said treatment makes a difference.

The women sitting next to me said it was all new to them.

Cancer care is a new thing in many developing countries. With all the other health problems facing the poor, there has been little interest in cancer treatment among local and international health experts.

Sara Stulac of Partners In Health says for a medical charity like hers, focusing on cancer means getting organized. “You do have to make sure that you have access to advice, to diagnoses, to medications."

And patients need some sort of social support system to help them get to the hospital. That is no small order in countries with bad roads – or no roads.

With patients coming in so late, diagnosis and treatment often fail, so last year the Haiti medical workers received training in how to use painkillers and provide other comfort care for people dying of cancer.

For medical advice, the clinic in Haiti relies on experts at the renowned Dana Farber Cancer Institute in Boston.

The doctors and nurses in Haiti check in once a week with Dana Farber. They gather around a speakerphone in a simple stucco house near the hospital.

Staffers at Zanmi Lasante consult about patients over the telephone with doctors at Dana-Farber Cancer Institute in Boston.

During one call, seven patients were up for discussion. Four were women with breast cancer.

Dr. Lawrence Shulman, head of Dana Farber, joined the call from Boston. He had been sent the patients’ medical histories, lab results, and what X-rays were available.

One woman had had a mastectomy last fall, but the cancer returned. Shulman suggested a different kind of chemotherapy.

Another young woman had a breast lump removed. In the US, lumpectomies generally require weeks of daily radiation treatments after the surgery, but Zanmi Lasante doesn't have any way to administer radiation. So Shulman suggested a full breast removal.

“She needs to go back and have a mastectomy,” Shulman said over the phone. “Then she needs five years of tamoxifen."

The tamoxifen costs just pennies a day, affordable even in Haiti. And there are other opportunities to keep costs down. In Haiti – for unknown reasons – breast cancer mostly hits women in their 20s and 30s, and mammography does not work well in women this age, so Zanmi Lasante doesn’t offer it.

Cancer surgery, chemotherapy, and after-care can be costly, however. Partners in Health provides all of this for free and relies on donors to finance it.

Sara Stulac, the head of Partners In Health’s cancer program, admits that her team is taking on a big challenge in a country with many other problems.

People used to say that AIDS drugs were too costly and too difficult to deliver in developing countries, yet millions of people with HIV in places like Africa and Haiti are now being saved. Stulac says there's no reason that can’t happen with cancer.

This story was reported with assistance from Ansel Herz. The series was produced with support from the Pulitzer Center on Crisis Reporting.