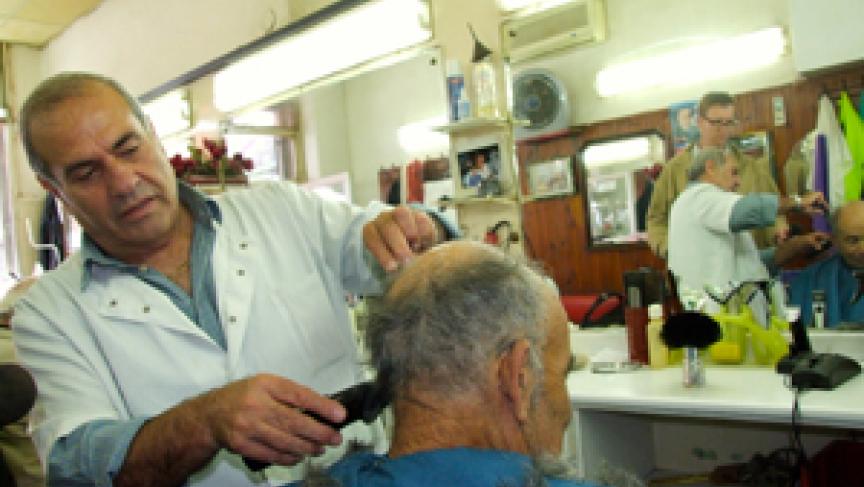 Jerusalem barbershop owner Yizhak Alon says he supports the Israeli prime minister on settlements, even if the Europeans are complaining. (Photo by Matthew Bell.)

There was talk in Israel Monday that at least three European governments were so displeased with that country's decision to press ahead with additional settlements in Palestinian areas that they were considering recalling their ambassadors in protest.

Subsequent reports said such a drastic response was off the table. But the episode still highlights the diplomatic bind Israel finds itself in right now.

The condemnation was sparked by an Israeli announcement to restart a controversial settlement project east of Jerusalem in the West Bank. The concern is that Jewish settlement building in the so-called “E-1” area would make it impossible to create a viable Palestinian state.

So far the Israeli government shows no sign of backing down, despite facing what could be unprecedented diplomatic isolation.

At Yizhak Alon’s Jerusalem barber shop, they heard about the controversy on the radio. But as he worked on a customer’s hair, Alon said that he’s got full faith in Israel’s prime minister, Benjamin Netanyahu.

What he’s doing is just fine, Alon said. Netanyahu is responding to the Palestinians. They went against the Oslo agreements by going to the United Nations.

The barber said he has no problem with new Israeli settlement building in the West Bank, even if the Europeans complain about it. But here’s a question.

What if the Americans get angry about the settlements?

“That’s not good,” Alon said. “Of course it’s not good. The U.S. is Israel’s most important ally. The Americans were against the Palestinian president’s trip to the United Nations too. So, if they’re angry about settlement building, it’s a problem.”

The timing of this decision on settlement building is troubling, said Anat Kurz of the Institute for National Security Studies at Tel Aviv University. It comes after Israel received widespread support from the U.S. and Europe during its recent military offensive in the Gaza Strip. And Kurz said it sends a message.

“This was intended as a show of dedication to what the government sees as Israeli interest for the whole world to see,” she said.

Kurz said putting Jewish settlements in E-1 will be seen as an Israeli attempt to put obstacles in the path toward peace with the Palestinians.

“Israel is isolated in the Middle East. The United States is also getting isolated regarding its Middle East policies,” she said.

The United Nations has condemned the settlement plan as “an almost fatal blow” to peace. Russia, Germany and the U.S. State Department have expressed their opposition. And Monday, the U.K., France and Sweden summoned Israel’s ambassadors to protest the announcement.

Jonathan Rynhold of Bar Ilan University said Netanyahu ought to take this seriously. The Americans, the Europeans and the Palestinians, he said, have all drawn a red line at putting settlements into this part of the West Bank.

“What Israel would gain by doing this is largely unclear to me. And what it would lose in terms of its diplomatic standing, it’s relations in a deeper sense in Europe, it’s relations with the U.S., is very, very clear,” Rynhold said.

But Netanyahu is standing firm. He’s called the Palestinians’ move at the United Nations a gross violation of previous agreements. And he said he intends to “carry on building in Jerusalem and in all the places that are on the map of Israel’s strategic interests.”