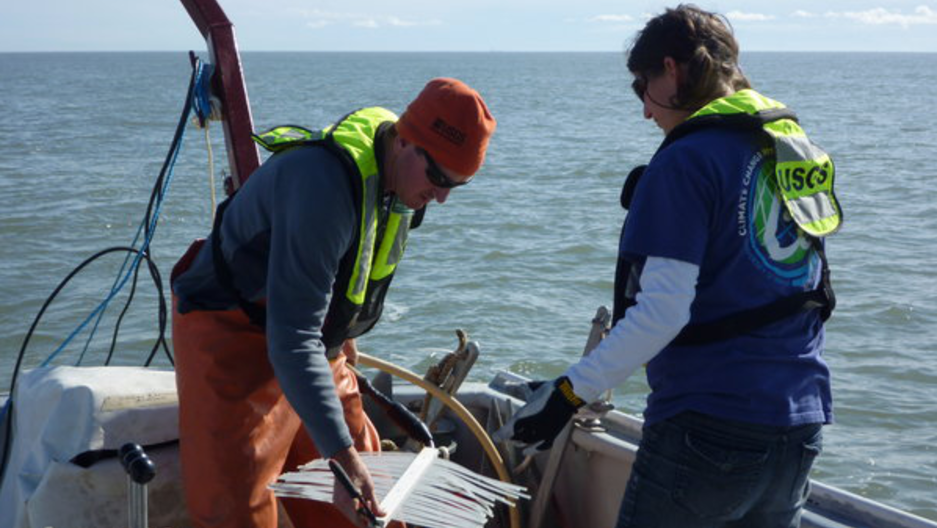 Researchers examine the Arctic Ocean to see whether methane is being released from deposits on the ocean's floor.

As international climate negotiators meet in Doha, Qatar, scientists are issuing a stark warning of possibly huge emissions of the greenhouse gas methane from the warming Arctic.

If you want to understand one of the ways that warming in the Arctic is affecting climate change, just light a match and stand back.

In a video taken in northern Alaska, researchers from the University of Alaska, Fairbanks recoil in amazement as one of them breaks a hole in an icecap on a lake, while another researcher strikes a match above it. The spark immediately explodes into a huge bubble of flames.

The gas escaping from the lake is methane — basically the same stuff you might burn in a stove or furnace. Researcher Katey Walter Anthony has become well known for these pyrotechnic displays. She says they’re a good test of whether methane is escaping from below lakes in the far north.

That’s important to know, because methane is a potent greenhouse gas. It doesn’t last as long in the atmosphere as carbon dioxide, but in that shorter time it packs a much stronger warming punch.

It turns out there’s a huge amount of organic matter trapped in the Arctic region’s permanently frozen ground. And as this part of the world warms up, it’s starting to decompose and release methane into the atmosphere.

Walter Anthony says there can be hundreds of thousands of methane seeps under a single Arctic lake.

“And then when you look at a map and realize that the Arctic has millions of lakes, and those lakes all contain methane, the numbers start to really add up,” he said.

And it’s not just lakes. Permafrost covers nearly a quarter of the Northern Hemisphere. And altogether it holds twice the amount of carbon that’s currently in the atmosphere. So if even a fraction of it were to escape, as it’s expected to do, the warming effect on the planet would be huge.

It’s one of those nasty sources scientists talk about that has the potential to cause runaway global warming.

Policymakers at the UN climate talks in Doha, Qatar this week are grappling with these very questions. New scientific warnings on climate change are coming quickly, including a stern warning last week from the U.N. Environment Program about the risks of methane escaping into the atmosphere from the melting Arctic.

The report’s lead author, Kevin Schaefer of the U.S. National Snow and Ice Data Center, says the message to negotiators is simple.

“If the emissions targets negotiated by the treaty do not account for these emissions from thawing permafrost,” Schaefer said, “we’re going to overshoot our target climate of two degrees above preindustrial levels.”

Two degrees Celsius is said to be the cutoff for avoiding the most catastrophic effects of global warming.

Current international projections for warming don’t take Arctic methane into account. And Schaefer says unlike emissions from burning fossil fuels, those from thawing permafrost are harder to stop.

“Even if we totally eliminated fossil fuel emissions today, the permafrost would continue to thaw for 20 to 30 years just responding to the temperature increases we already have,” Schaefer said.

Schaefer says current warming trends likely will add a huge amount of Arctic methane to the atmosphere, although no one can say exactly how much. His new report calls for nations with extensive permafrost to create monitoring networks to get a better handle on the problem.

Such an effort is already underway in the U.S.

Chip Miller is part of a five-year NASA project to monitor both CO2 and methane levels over permafrost.

At his office in Pasadena, Calif., Miller shows a video from a flight over an area of forests, swamps and lakes in the Inoko Wilderness, near McGrath, Alaska.

He says the flights are helping put real numbers on just how much carbon is being emitted as the permafrost thaws. And some of those numbers are surprising. Miller says in this area of pristine wilderness, he and his colleagues found some of the highest concentrations of CO2 and methane that they’ve observed anywhere in Alaska.

“We’re seeing something that would be associated with concentrations like you might see in a city or around oil and gas production, even though it’s completely out in the wilderness,” he said.

Measurements like these should clear up some of the uncertainty surrounding Arctic methane emissions.

But that’s only part of the story. An even bigger wildcard lies under the Arctic Ocean.

What’s down there is something called methane hydrates, a frozen form of water and methane.

The deposits are really important, says Carolyn Ruppel of the U.S. Geological Survey, because a small volume of them concentrates methane by about 160 times.

“So if you start melting those methane hydrates,” Ruppel said, “you can obviously release a lot of methane very rapidly.”

Scientists believe subsea methane hydrates hold roughly twice the carbon contained in all the world’s fossil fuels. So it’s easy to see why many are concerned.

Ruppel says she’s not worried about a sudden, massive release, because most methane hydrates are so deep under the ocean that any releases aren’t likely to make it to the atmosphere.

But she says it’s another story on the shallow continental shelves off of Siberia and Alaska.

Russian scientists have reported extensive methane seeps off of Eastern Siberia. And on the Alaskan side, Ruppel’s team of scientists is trying to quantify how much methane is escaping from these subsea hydrates.

She says the past couple of years they’ve been using an instrument that can measure methane in real time as their boat moves over the Arctic Ocean. And what they’ve found so far doesn’t look good.

“There’s some very provocative patterns that might imply that methane is higher as you cross this (submerged) permafrost boundary,” Ruppel said.

It’s an indication that shallow frozen permafrost beneath the ocean may be thawing, allowing methane to bubble up to the surface.

Still, Ruppel says, there are big uncertainties about what’s going on with methane releases in the Arctic.