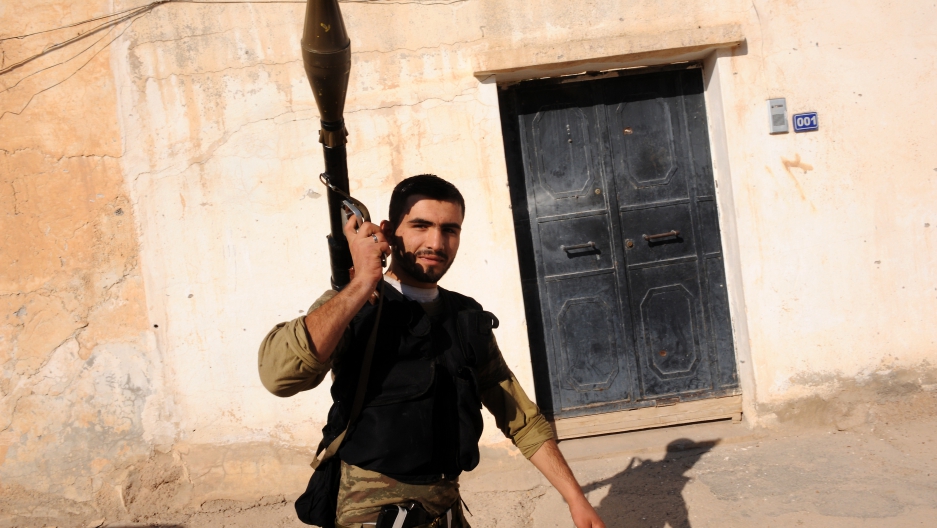 A Syrian rebel takes position in the town of Ras al-Ain near Turkey on November 16, 2012. Weapons shipments are making local and regional conflicts in the Middle East more lethal, scarring the societies where the weapons end up.
Credit: Bulent Kilic
Share

“I keep it for special occasions,” the longtime weapons smuggler said as he roasted sweet tea over a wood fire.

He said the gun was a US-made M-16 that arrived in Egypt from Jordan tucked into a contraband shipment of hash.

As elsewhere in the greater Middle East, most residents with weapons in the volatile Sinai Peninsula acquired them illegally. The arms are often gleaned from abandoned stockpiles, bought from corrupt security officials or trafficked from neighboring countries.

From Libya to Syria, Yemen and the Gaza Strip, everything from shotguns and semi-automatic rifles to anti-tank and anti-aircraft weapons are making local and regional conflicts more lethal, scarring the societies where the weapons end up.

And analysts say the problem is only getting worse.

“There were particularly troubled hotspots in the Middle East, where illegal or grey market transfers were the norm,” he said, referring to a type of weapons transaction that may begin as legal but diverts arms to illegal end-markets. As the unrest spread, he said, so did the illicit weapons flows.

“It’s starting to get worse,” he concluded.

Long-term conflicts in the Middle East have helped flood the region with small arms. Some of the weapons arrive as bribes from Western governments to oppressive regimes for maintaining peace with Israel or are acquired by armed groups challenging state power, such as Kurdish separatists in Turkey and Iraq.

But according to the Congressional Research Service, the US Congress’s public policy research arm, the Middle East is the developing world’s largest arms market.

The United States is the leading exporter of legal small arms to governments across the region. It sold $1.1 billion of weapons to Bahrain, Egypt and Yemen from 2005 to 2010. Some of the arms have ended up on the black market and in the hands of smugglers like Abu Ibrahim.

His Bedouin kin in Sinai’s north have engaged in a low-intensity conflict with heavy-handed security forces for years. The conflict is fueled largely by the presence of illicit small arms, including recent shipments from post-Gaddafi Libya, where ordinary people joined rebels pillaging arsenals during the civil war.

During the tumult that accompanied the Arab Spring, weakened or toppled governments in Egypt, Libya and Syria withdrew from borders and other guarded areas, giving up weapons stocks as they fled rebel fighters.

Across the Sinai Peninsula — where police and intelligence forces recently retreated under fire from armed protesters — smugglers, Islamic militants, criminal networks and armed gangs are amassing even more weapons that have poured across Egypt’s porous border with Libya.

“This has always been a passageway for wars,” Ibrahim said. “We’re not treated well by the authorities. If we were, we wouldn’t need weapons.”

Illegal weapons shipments from Libya and Iran are helping fuel the full-scale civil war in Syria, where a peaceful uprising developed into an armed conflict that’s killed around 30,000 people, according to anti-government activists.

Oxfam’s Butcher pointed to reports saying weapons are being shipped directly from Benghazi, the cradle of Libya’s uprising, to the rebel Free Syria Army via Lebanon.

“It is absolutely clear that the sustained battle in Aleppo couldn’t possibly have happened without a large amount of arms coming in from outside,” he said.

Syria’s largest city has been at the center of a pitched battle between the Free Syrian Army and the forces of President Bashar al-Assad for months.

“There is a very steady flow of arms going in — from Lebanon, Iraq, Turkey and even Jordan,” said Nicolas Marsh, an arms researcher at the Norwegian Initiative for Small Arms Transfers, a coalition of civil society groups seeking to reduce armed violence. “If the opposition in Syria had run out of ammunition, they would have lost right away.”

Illegal small arms can tilt the balance of power in some conflicts, but they often help entrench stalemates in which the breakdown of infrastructure and services increases perceptions of insecurity — and intensifies violence.