Jackson Orem is a busy man. He directs the Uganda Cancer Institute – the only dedicated cancer treatment facility in a country of 33 million people.

Yet he still finds time to see patients, like Musa Settimba.

“Good to see you,” Orem says as he enters a small exam room furnished with little more than a chair and table.

Settimba is here for a checkup. He has a type of gastrointestinal cancer that is often fatal, even in countries with access to the latest medical care.

Orem has arranged for Settimba to get Gleevec—a very effective and costly new cancer drug—for free, courtesy of the manufacturer. There's paperwork involved, and drugs for only a few cancers are available this way. It's a godsend for Settimba, who has been doing very well.

“You are getting one of the best treatments for this disease,” Orem tells his patient.

Unfortunately, Settimba is the rare exception.

The survival rate for patients who make it to the Uganda Cancer Institute is astonishingly low. 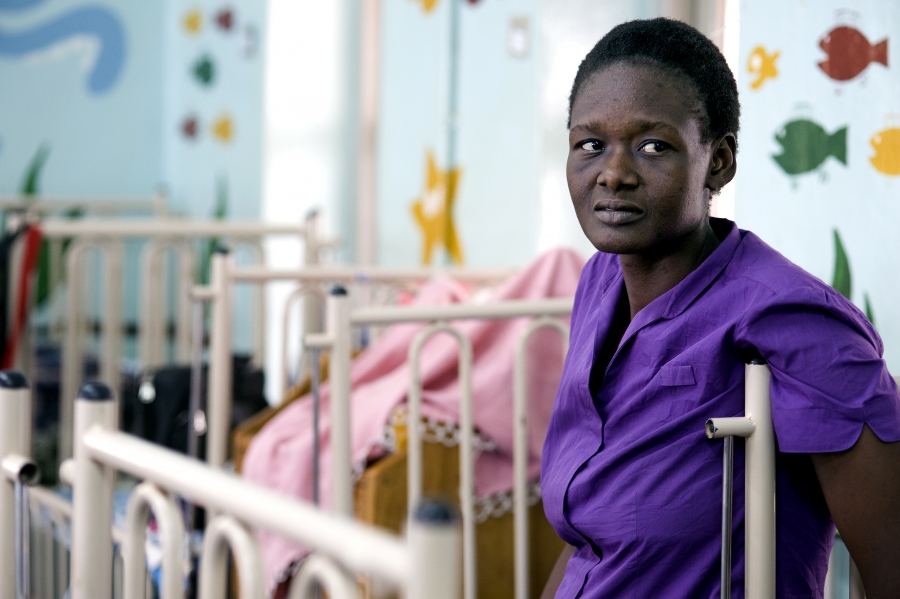 Inside the Uganda Cancer Institute.

Orem says most Ugandans don't have a real concept of cancer as a set of diseases that can be diagnosed and treated. In some tribal languages, there is no word for cancer.

And the people who do realize they have cancer often hide it. They fear being stigmatized, and “once you are diagnosed with cancer, they think that it's already a death sentence,” says Orem.

They're partly right. Most people don't come in until the very last stages of cancer. At that point, no doctor anywhere could do much for them.

Orem studied oncology at Case Western Reserve University in the United States and then came back to Uganda to head this government-owned cancer institute in 2004. For several years, he was the only oncologist in the entire country.

“It was really very, very demanding,” he says. “I can't explain how I was managing, because actually I was doing everything.”

Orem doesn't complain about the hard work, but some things make him cringe. One of them is a comment he's heard expressed by people from developed countries—that cancer doesn't hit poor people.

“People think that malaria kills [and] other diseases are killing people from a low socioeconomic status. But cancer is the same,” he says. “The truth of the matter is that cancer is a disease of the African person just like any other person elsewhere in the world.”

The perception that cancer is not a problem of Africans leads to a lack of money, he says.

There is also a perception that cancer is too expensive to treat, and treatment is too high-tech, to be done in poor countries. Orem says that's not necessarily true.

Orem takes me for a walk up a hill so we can see the Uganda Cancer Institute’s expansion plans.

The Ugandan government is putting up what will be a modern 200-bed cancer hospital to replace the 120 bare-bones beds of the current Institute down below.

“You see that expanse of a building with a blue roof?” Orem says, pointing. “That is the outpatient department.”

In that building is a clinic like some you might see in the US, where patients receive chemotherapy through intravenous lines. There is also a building with the beginnings of a modern pharmacy.

None of the buildings include a gamma beam generator or a robot that can do surgery, but some conditions can be treated as successfully here as in the US.

And now Orem has the help of five Ugandan cancer specialists who recently received training in Seattle, at the Fred Hutchinson Cancer Research Center.

What keeps Orem going is that people in the West are beginning to take interest.

Last year, the United Nations urged that more be done to detect and treat cancer in the developing world. George and Laura Bush recently toured Africa to bring attention to breast and cervical cancer.

“People are much more receptive to our messages than before,” Orem says. “It looks like we are beginning to make an inroad.”

Still, he says, when it comes to fighting cancer, Uganda is just at the starting point.

This story was reported with assistance from Jennifer Bakyawa. The series was produced with support from the Pulitzer Center on Crisis Reporting.