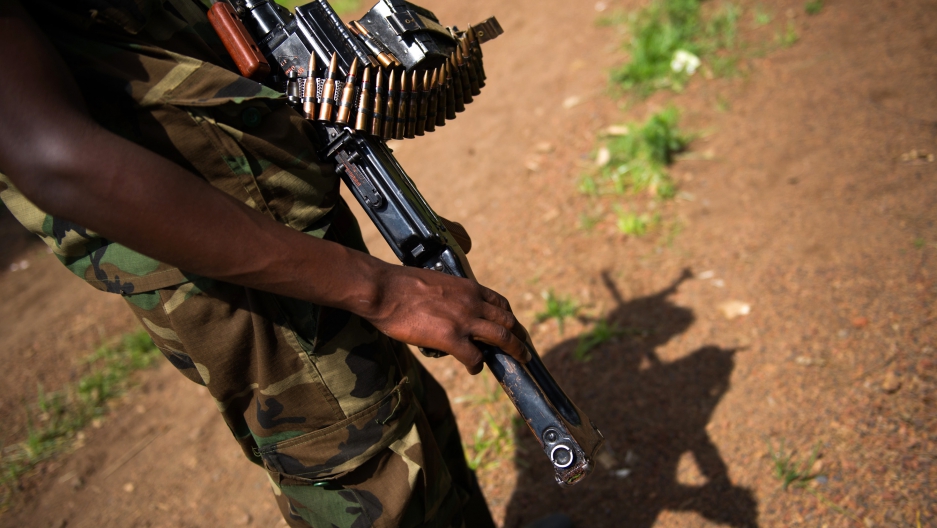 A rebel outside Goma in the Democratic Republic of the Congo this month.
Credit: Phil Moore
Share

The pavilion for Chinese manufacturers was among the three largest at the Africa Aerospace and Defense exhibition in September, surpassed only by host South Africa and the United States, the world’s largest weapons maker by far.

Many of the made-in-China weapons touted by firms such as Norinco and Poly Technologies were big-ticket items. Unaffordable for most African countries, their warships and fighter jets were advertised chiefly to impress potential customers.

But experts say the growing number of Chinese small arms coming to Africa is far more worrying. Once on the continent, cheap assault weapons and ammunition easily end up in the hands of mutinous factions, militia groups, rebel armies or repressive regimes that fuel wars and human rights abuses.

A 2011 report by the Stockholm International Peace Research Institute (SIPRI) said that arms recipients in Africa “often cannot secure their stockpiles, and many weapons have been lost or stolen, including by rebel groups.”

Paradoxically, arms supplies to government forces in Africa “risk being used in the overthrow of African governments,” a SIPRI policy paper said, pointing to recent examples of coups in Guinea, Madagascar, Niger and Mauritania.

Gathering accurate numbers is nearly impossible because the small arms trade is particularly murky, and China is among the least transparent of countries when it comes to weapons sales. However, international monitoring groups say it’s evident Chinese weapons have flooded into sub-Saharan Africa in recent years.

Beijing doesn’t report its small arms exports and has resisted UN efforts to expand reporting of the trade.

But deliveries of major arms from China to sub-Saharan Africa are estimated to have grown from just 3 percent of the total volume between 1996 and 2000 to 25 percent from 2006 to 2010, the report said.

Chinese-made rifles and incendiary ammunition have been found in the Darfur region of Sudan, an area subject to a UN weapons embargo, while rocket-propelled grenades from China have been seen in Somalia. Chinese rifles have also been discovered in the Ivory Coast.

China may not be taking into account “the risk of misuse or diversion” of its arms transfers to Africa, he said.

Although Chinese officials say they’re committed to fighting illicit trade in small arms, Beijing has often stymied UN requests for more information about its weapons found in conflict zones and reacted angrily to criticism of its arms trade.

In Zimbabwe, a country with longstanding military ties to China, there are fears Chinese-made small arms may play a role in political violence many predict will take place ahead of elections tentatively planned for March.

“China has been a key source of arms and ammunition to the Zimbabwean security forces,” said Guy Lamb, director of the University of Cape Town’s Safety and Violence Initiative.

In a notorious incident at the height of brutal violence during the country’s disputed 2008 elections, a Chinese ship loaded with weapons and ammunition destined for Zimbabwe docked at the South African port of Durban.

Workers there refused to unload the rockets, mortar bombs and mortar tubes, and the “ship of shame” was forced to leave, although it was rumored to have later delivered its cargo via Angola.

More from GlobalPost: Once a giant, Russia struggles in the small-arms market

Now there are fears money is being siphoned off from Zimbabwe’s lucrative Marange diamond fields — where China’s Anjin Investments is the largest diamond company — partly in exchange for Chinese weapons.

The watchdog Global Witness recently warned that off-budget diamond revenue from the Marange fields could fund human-rights abuses during the election.

But asked about the precise connection between the diamond trade and the military, Lamb echoes the common complaint: “We don’t know enough.”