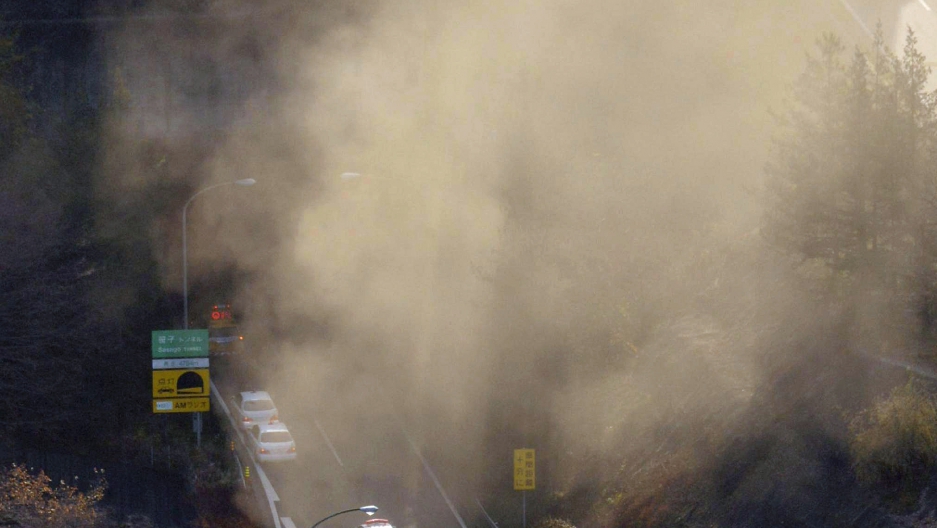 The collapse, 50-miles from Tokyo, crushed three cars and started a fire that saw smoke billowing from the entrance.

Japanese broadcaster NHK said rescuers found five bodies inside one van, another man inside a cooler truck and three others inside a car.

Rescue officials said earlier they found the van with bodies inside, but couldn't confirm the death toll until flames subsided.

"What we found resembled bodies inside a vehicle, they were blackened. We have visually confirmed them but have yet to take them out for closer examination," one official said, AFP reported.

A driver who escaped the collapse said that concrete crumbled over a car in front of him.

"A concrete part of the ceiling fell off all of a sudden when I was driving inside," the man told NHK, according to Sky News. "I saw fire coming from a crushed car. I was so frightened I got out of my car right away and walked one hour to get outside."

Rescuers on the scene had to abandon efforts for hours, after it was believed another cave-in was imminent, AFP said.

The man who died in the cooler truck radioed for help, but doctors said later that he died.

The New York Times reported that one woman managed to flee her vehicle for safety but had told rescuers that five others did not make it out safely.

This despite the tunnel having undergone inspection this past September.

"It is conceivable that the parts connecting the ceiling panels and pillars, or pillars themselves, have deteriorated, affected by vibrations from earthquakes and passing vehicles," he said.

The tunnel collapse saw the closure of the Chuo Expressway, an important highway near Mt. Fuji that connects Tokyo with western Japan.