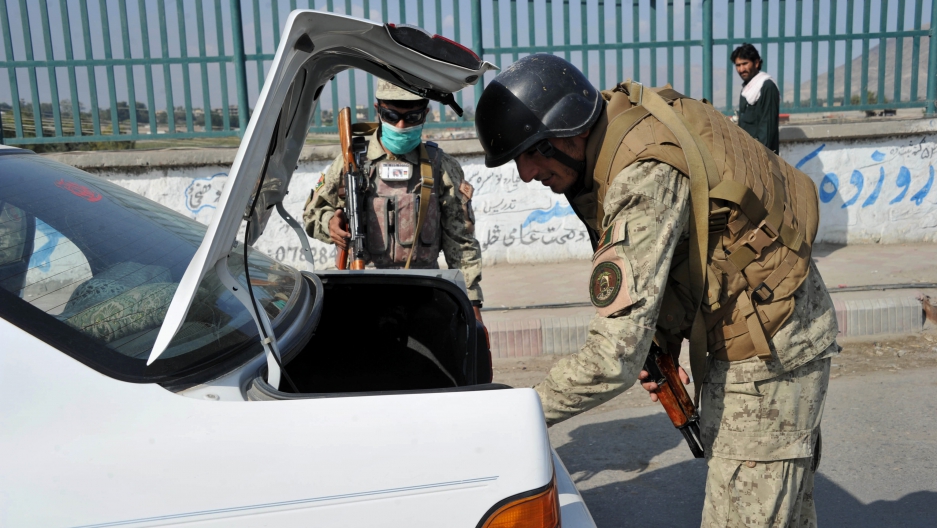 Afghan security personel check passengers and cars at a checkpoint in the city of Jalalabad in Nangarhar province on October 20, 2012.
Credit: Noorullah Shirzada
Share

An attempted attack by eight suicide bombers at the Jalalabad NATO air base in eastern Afghanistan was repelled by Afghan soldiers Sunday.

The Taliban-linked suicide bombers detonated two cars bombs at the main gate of the air base at dawn with follow-up attackers killed in a gunfight.

The second wave of attackers attempted to rush the gates of the compound but were killed by helicopters and Afghan security.

"Coalition forces at the air base successfully defended it, a gunbattle took place and I can confirm that coalition air force were involved," said Martin Crighton, spokesman for the NATO-led coalition, reported the Guardian.

"According to our operational reporting at least one member of the ANSF [Afghan national security forces] was killed and others were wounded."

Though no NATO soldiers were killed, it is still unclear whether any were injured during the blast or ensuing gun battle.

One civilian was killed as he attempted to cross the street near the blast.

It is the third major attack against a joint NATO-Afghan air base since September, when militants attacked Bagram air base destroying a helicopter and killing three, reported GlobalPost.

In October, a suicide bomber blew himself up at a gate of a NATO-Afghan base in Paktia province, wounding several Afghan and NATO troops, said Voice of America.

Jalalabad has been the scene of numerous attacks given its proximity to Pakistan, where it is believed that Taliban fighters take shelter.