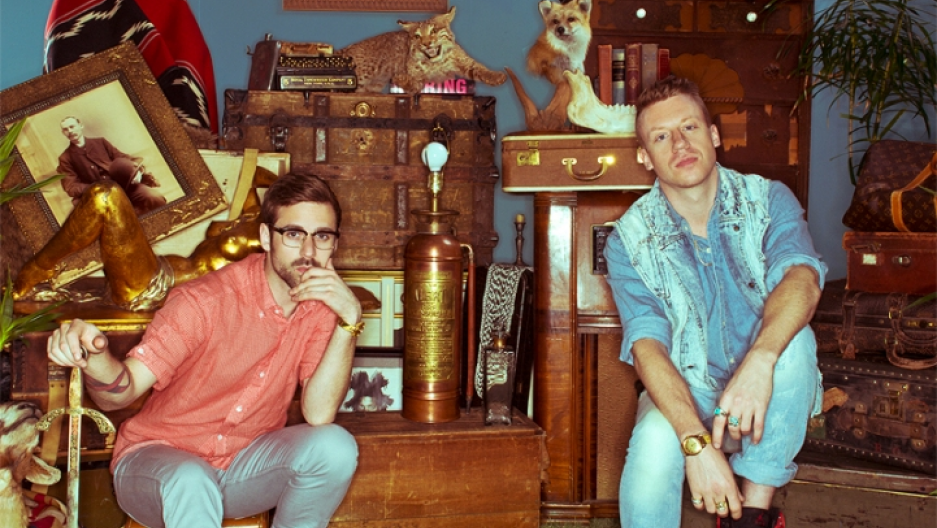 Ryan Lewis and Macklemore's latest album is The Heist. (Photo by Jason Koenig.)

Macklemore is an unlikely rapper: he’s from the Pacific Northwest, he’s white, he’s proud of wearing secondhand clothes. And now he’s famous for his support of gay marriage.

Macklemore’s “Same Love” came out of his frustration with hip-hop’s misogyny and homophobia.

“Those are the two acceptable means of oppression in hip-hop culture,” he said. “It’s 2012. There needs to be some accountability. I think that as a society we’re evolving and I think that hip-hop has always been a representation of what’s going on in the world right now.”

He thinks the song — and its viral video — helped sway Washington’s recent referendum which in support of gay marriage.

Rather than fighting for humans

That have had their rights stolen

But that's not important

No freedom 'til we're equal

Damn right I support it.

He began writing the song from the perspective of a gay 13-year-old, after his mother sent him an article about the boy’s suicide.

“I played it for my producer, Ryan Lewis,” he recalled.

The producer told him that it was good, but he could do better by telling his own story.

Macklemore has close gay relatives, and comes from an especially liberal corner of Seattle, but that didn't mean he wasn't exposed to homophobia.

“I also come from the Catholic Church and the hip-hop community, which stereotypically are very homophobic communities,” he said.

Macklemore's music interests are varied, however. He has another hit right now, on pop radio, "Thrift Shop," about shopping for secondhand clothes.

“In hip-hop culture we’re constantly being told to buy Louis Vuitton, buy Prada,” he said. “It really stuck out.”

Macklemore and Lewis' new album is The Heist.