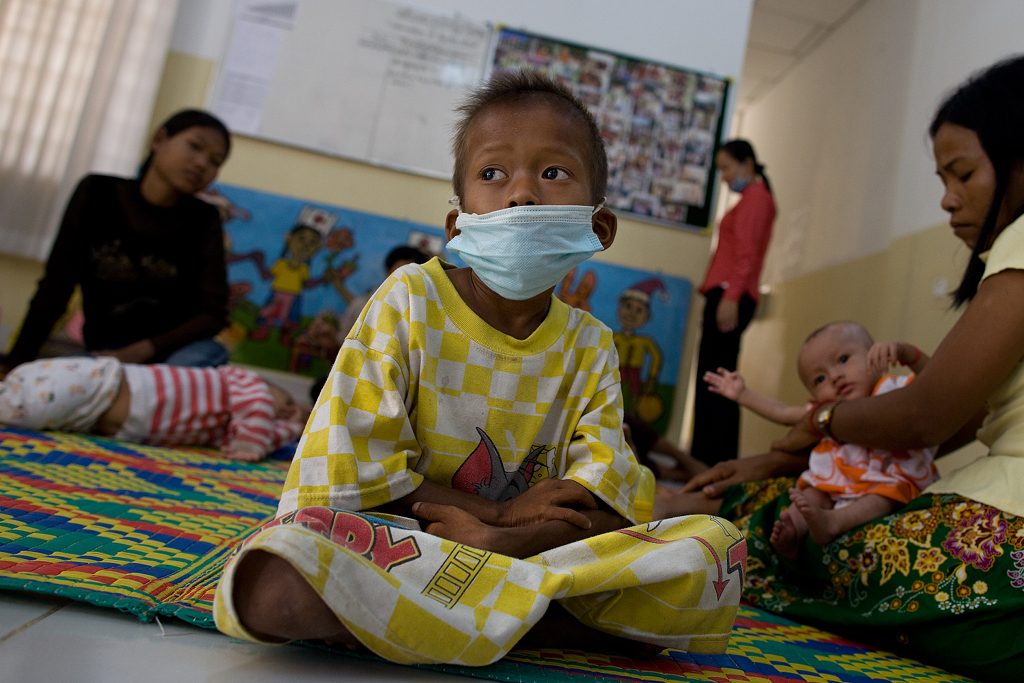 Panha, 8, rests on a bed at the special ward at the National Pediatric Hospital for HIV/AIDS in Phnom Penh, Cambodia.
Credit: Paula Bronstein
Share

HONG KONG — AIDS came late to Asia, but it came with a vengeance.

Emerging in the Golden Triangle in the late 1980s, the disease spread quickly, eventually killing more people in one year than anywhere outside of Africa. With 60 percent of humanity living on the continent, the potential for an HIV/AIDS epidemic across Asia has been a terrifying, and catastrophic, prospect.

Today, the good news is that the worst seems to have been held at bay. No generalized epidemic has broken out across the region, HIV infection rates have stabilized in many countries, and more and more people are receiving antiretroviral medication.

“Progress in Asia and the Pacific is significant and is helping to lead and shape the global agenda on AIDS,” said Michel Sibidé, executive director of UNAIDS. The countries of Asia “have shown ample proof that HIV epidemics can be stopped, and that treatment and care can reach people who need it.”

The numbers are heartening. Since 2006, the number of people in Asia living with HIV has stayed stable, at roughly 4.9 million people. At the same time, the number of people receiving antiretroviral care has more than tripled, to 740,000 in 2009. And the rate of infection has dropped by 20 percent over the last decade. Since 2006, infections among children have also decreased by 15 percent.

Some countries — particularly Thailand, Cambodia and China — have made notable strides in slowing, or even reversing, the spread of the disease.

In Thailand, a concerted government campaign focused on sex workers has helped drive the number of infections and AIDS-related deaths down.

In Cambodia, the adult HIV prevalence fell from 1.2 percent of the population in 2001, to 0.5 percent in 2009. The country is now one of only eight nations in the world that deliver antiretroviral treatment to over 80 percent of those who need it.

In China, a national policy called “Four Frees and One Care” was implemented in 2005, providing free HIV testing, free antiretroviral therapy, free services for preventing HIV outbreaks among children, free education for children orphaned by the disease, and care for people living with AIDS.

“I still remember, UNAIDS one time had a publication projecting that China’s epidemic by 2010 could be tens of millions,” he says. “But now, China, still has a total number less than one million. That is a great success to bringing the epidemic under control.”

Of course, this improvement is hardly the end of the story for Asia's AIDS crisis. The disease continues to spread: for every person in Asia that begins antiretroviral treatment, roughly two new adults are infected with HIV. Moreover, funding is too tight — the total of $1.1 billion spent on campaigns in Asia in 2009 was less than one-third of what the UN says is needed for universal success.

“At this crossroads in the response in Asia and the Pacific, complacency is not an option. Without intensifying efforts where they are most needed, the impressive gains will be lost,” the UN report says.

Indeed, while the overall rate has stabilized, HIV/AIDS continues to spread in certain populations, and certain regions of Asia. In general, one of the biggest at-risk groups is men who visit prostitutes, and their sex partners. (Between 0.5 and 15 percent of Asian men buy sex regularly, according to the World Health Organization.)

In the Papuan provinces of Indonesia, infection rates are up to 15 times higher than the rest of the country. In Vietnam, over 18 percent of intravenous drug users are HIV positive. And in Myanmar, 29 percent of men who have sex with men are infected.

Complicating matters, some of these groups shy away from seeking help due to laws and lingering taboos.

“To say you are [HIV] positive as well as gay is almost a fate worse than death in some of the contexts in Asia,” says Andrew Tam, President of myPlus, the Malaysian Positive Network, in the UN’s report, Getting to Zero. “I would rather stand up and say I am positive, and keep quiet about my sexual identity.”

India remains ground zero for HIV/AIDS in Asia, with half of all people infected living there. In 2009, 170,000 people died of AIDS-related diseases. At the same time, there has been progress, with 320,000 people receiving antiretroviral treatment in 2009, and the rate of infections dropping over 50 percent since 2006.

Still, while there is much to be glad about, it may be too soon for optimism that Asia will "get to zero" anytime soon.

“I would like to highlight the threat that comes from political leadership being complacent and claiming victory too early,” says J.V.R.Prasada Rao, United Nations Secretary-General’s Special Envoy for AIDS in Asia and the Pacific.

Those countries that have achieved the most progress are most at risk of losing their focus, he says.

“We cannot afford a second wave of the epidemic in the region.”