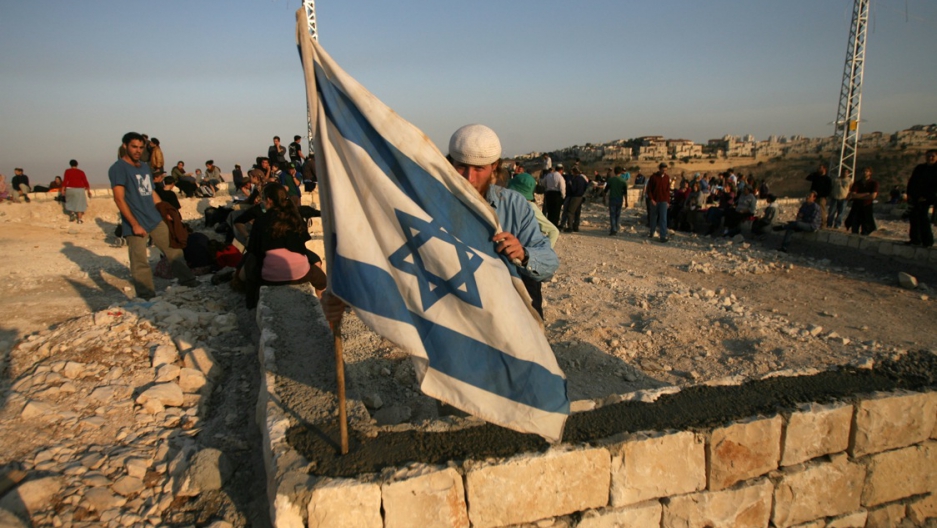 A Jewish settler raises an Israeli flag at the E1 settlement area on December 9, 2007, near the Israeli settlement of Maale Adumim in the West Bank.
Credit: Uriel Sinai
Share

The official would not give further details where the homes would be built, but according to Haaretz correspondent Barak Ravid, at least some will be in the E1 area between Jerusalem and the settlement of Maaleh Adumim.

It "will divide [the] West Bank in two parts regardless of Israeli commitments to the US," Ravid tweeted.

He said he had been told the order came from Prime Minister Benjamin Netanyahu.

A senior diplomatic source said Israel would also "advance building plans for another several thousand housing units in settlement blocs in the West Bank and in East Jerusalem," Ravid wrote in Haaretz.

"We reiterate our longstanding opposition to settlements and East Jerusalem construction and announcements," National Security Council spokesman Tommy Vietor said. "We believe these actions are counterproductive and make it harder resume direct negotiations or achieve of a two state solution. Direct negotiations remain our goal and we encourage all parties to take steps to make that easier to achieve."

The Palestinian Authority has said it will not resume peace talks unless Israel freezes all settlement building. It, like the US and the UN, considers all Israeli settlements in the West Bank illegal, according to Bloomberg.

What's more, E1 is a particularly contentious area to build in, the BBC said, since Palestinians say settlements there will divide the West Bank and prevent the creation of a contiguous Palestinian state.

In recent years the US has tried to discourage construction in E1, Al Jazeera said. Israel agreed to freeze settlement building there as part of the 2003 "roadmap for peace," according to AFP.

Yet Israel accused the Palestinians of violating peace agreements by seeking their new UN status, and warned last night that it would respond accordingly.

"Unilateral actions on the ground will not be accepted by the international community," Ban said.