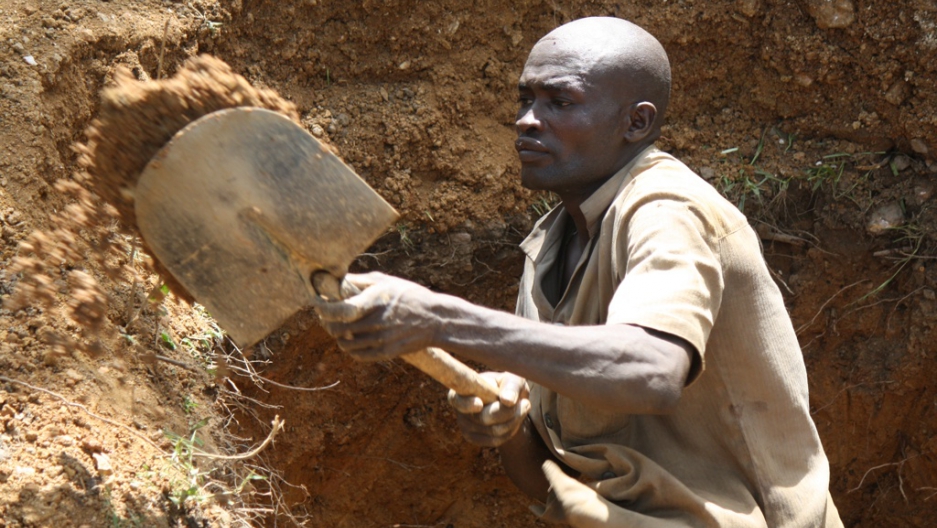 Independent gold miners in Nigeria fear that government and corporations will take over their livelihood.
Credit: Heather Murdock
Share

Editor's note: Nigeria's Gold Rush is a two-part series. Read about how the mining is killing children here.

ZAMFARA STATE, Nigeria — It’s not exactly your classic California gold rush. But it might end the same way — enriching a precious few, and leaving the rest penniless.

Hassan Mousa, a miner and father of seven, lives miles from then nearest paved roads, electricity or cellphone service. Before he started mining, he said, his family was barely surviving.

The locals have always known about the gold here, but in the past it was difficult to make a profit selling small amounts. The price of gold on worldwide markets, however, has risen sharply over the past decade. About four years ago, word began to spread through rural villages that prices where high and buyers were waiting.

Many Zamfara farmers, like Mousa, dropped their hoes, picked up pick axes and began lowering themselves into deep pits to excavate rocks laden with lead and gold. Using hammers, they break the rocks apart before feeding the pebbles into electric flourmills to extract their prize.

Gold prices continue to soar after roughly two decades of stagnation and, for now, business at these low-tech operations is booming.

Nigeria’s federal government seems to have other ideas. It passed a law in 2007 that transferred the rights to all mineral resources in Nigeria to the state. The government then sold Zamfara gold mineral titles to individuals, international and Nigerian companies. Zamfara state officials say, however, that the title owners have so far been slow to move because the mines are relatively small and villagers now occupy the land, and have for as long as anyone can remember.

But as the price of gold climbs, things are changing. No one knows exactly how much gold is in the state, but the independent miners are revealing stores that were previously unknown. Officials say title owners are getting anxious to dig and are pressing the government to shut down the artisanal mines.

If this were to happen, the ideal scenario would be for companies to move in and employ local miners at wages comparable to what they are now making. But community leaders here say at present, most miners have no legal rights and they fear their incomes will be snatched away.

“We don’t know who owns the mines here,” said Hassan Haruna, the secretary of a local miner’s association, at a gold mine surrounded by miles of forest and grazing lands. While he talked, workers crawled into craters from 5 to 50 feet deep with shovels. They used old plastic jerrycans, lowered with a rope, to fill with gold-laced gravel and rocks.

Miners are now organizing into cooperatives, he said, hoping to buy back the rights to the gold on their land before it’s too late. If they can’t obtain the legal rights, miners fear international corporations — which are already eyeing the profit potential — will push them out.

“We are doing it illegally,” Haruna said. “We don’t have any single paper to go and mine. But they told us to form an organization and we did that.”

Haruna said the union was formed to help the miners navigate the bureaucracy as a group. Most live many miles from the nearest road and few have vehicles. For many Zamfara miners, traveling to the Nigerian capital to fill in the required paperwork would be as difficult as getting to China. Even as an organized group, he added, they have yet to figure out how to acquire the right documents.

Some miners don’t even know that the federal government altered their traditional land-ownership structure, under which land and its resources are carefully divided between farming communities and cattle herders.

Obtaining ownership of the resources is only part of the problem. The gold here is among rocks that are infused with poisonous lead. That’s devastated the health of local children, killing hundreds. But miners, distrustful of the government and worried they’ll lose their livelihood, are often hesitant to report health issues related to the gold mining.

Prior to the gold rush, Zamfara villagers were farmers, making maybe $1 a day. Now aid workers say they average $10 to $15 a day, a sum that allows for healthy food, some access to the outside world and at least a modicum of health care.

Since the lead poisoning outbreak began, federal authorities have repeatedly announced bans on un-licensed mining. But local officials have pledged, for now, not to enforce the bans. Enforcing a ban would likely only drive the industry underground — figuratively speaking — anyway, aid workers say.

As a result, Ivan Gayton, the head of Nigeria’s Doctors Without Borders, said sick children are not always getting the treatment they need.

“They fear at any moment their activities can be taken from them unilaterally, which is more or less the case,” he said. “According to the law of the moment at some point someone can show up and say, ‘Sorry, what’s underneath the ground in your own village, underneath your own hut, belongs to me. Move aside.’”

At the mines it is obvious that the men are nervous. In one remote pit, Aliyhu Nuhu Adam was noticeably upset when he saw a camera. He wanted to know if the purpose of the camera was to alert authorities as to the location of the mine.

He relaxed and agreed to an interview after he was told the place would not be revealed. Once the microphone was turned on, he smiled shyly and voiced no complaints about bans or laws — only for the lack of drinking and washing water at the site.

“I’m very lucky that I’m making some money,” he said, perched on a pile of un-crushed rocks containing gold ore.

Like the California Gold Rush, people have come from all over Nigeria and beyond to dig in these mines, he said. In a country where most people live in abject poverty, he said small-scale mining offers some hope for the future.

“This is Zamfara State,” he said. “We have gold everywhere.”