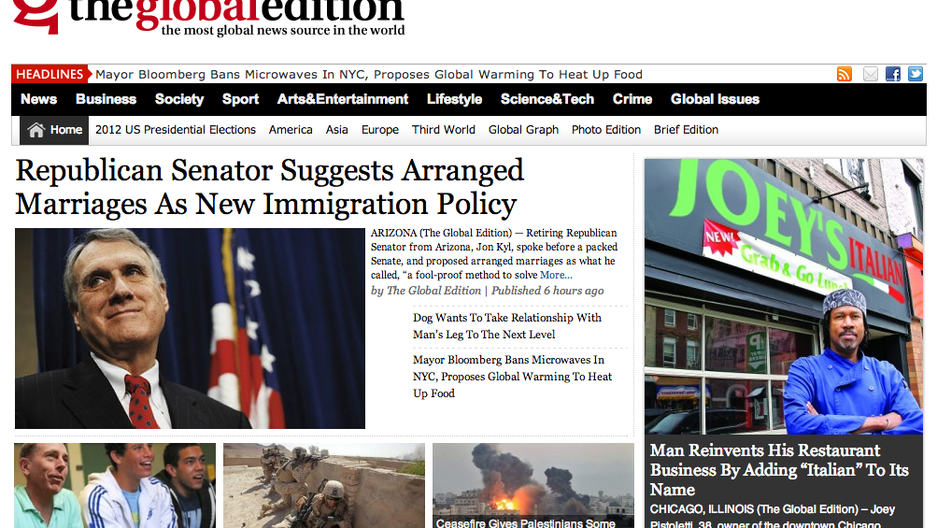 Global Edition is a new, English-language satirical "news" site, created by a group of Serbians. It's modeled after The Onion.

The Internet makes it harder and harder for anyone to separate fact from fiction these days.

A story from the satirical website The Onion is a case in point. The Onion recently proclaimed North Korea’s Kim Jong-Un to be “The Sexiest Man Alive.”

A Chinese state newspaper picked up the story and ran it as a real one, complete with a slideshow of the young Korean leader in more than 50 striking poses.

The Onion’s not the only one out there finding success with this formula. There is, for example, the group of Serbs behind NJUZ.

A few years ago, Serb businessman Dejan Nikolic got sick and had to take a leave of absence from work.

A huge fan of The Onion, not to mention The Daily Show and Stephen Colbert, he started writing satirical stories on his Facebook page. And people started reading and sharing them.

So in 2010, Nikolic and some friends decided to start a satirical website of their own in Serbian. That’s how NJUZ got its start.

“It basically started off as a rip-off of The Onion,” Nikolic said. “And we wanted something to do something similar here because we knew the ground was fertile.”

Nikolic quips that almost everything that happens in the Balkans is already a parody of reality anyway. Every day is akin to walking through a political, social and ethnic minefield.

But, Nikolic says, the NJUZ crew tries to stay funny by being equal opportunity destroyers. And that means bringing no political agendas to the writing table.

“We aim to do the real journalists’ jobs. So no matter what the story, we tend to take the facts and question the motives only if the target really did what the target reportedly did or said,” he said.

Well, for the political stuff anyway.

It was actually a completely trumped up shark story that won NJUZ its 15 minutes of Internet fame.

Here’s how the story went.

Dragan Stevic, a Serb, was on vacation in Egypt. Stavic reportedly got drunk, jumped into the water and unwittingly landed on a threatening shark, killing the beast with his legs.

It was completely and utterly made up. Except that Macedonia’s official news agency picked up the story, translated it into English and ran it as real.

Then social media got hold of it, and before long, newspapers around the world were running it — Chinese newspapers, Arabic newspapers, even The New York Post.

And they changed the story to great comic effect. It wasn’t Stevic’s legs that killed the shark, but his butt.

“They called several physics professors, and they basically made an infographic showing its possible, that if you have enough power ... well, if you have a very fat Serbian tourist, you know, this would work,” he recalled.

A couple of Australian blogs even named the fake Dragan Stevic “Man of the Year.” For real.

And then the real story of the fake story got outed.

Still, the NJUZ newsroom had a good laugh, although Nikolic admits it was nervous one.

“You start thinking about how easily you can manipulate the press on the world stage," he said. "With the shark, it showed it was a trend.”

Nikolic blames the speed with which journalists have to work in the Internet age. Everyone wants to get the craziest story first, he says, in order to get all the advertising clicks. Fact-checking, proper translation — it all goes out the window.

No wonder, then, that NJUZ is expanding.

It has started an English-language site called The Global Edition.

“The Onion can’t employ them all,” he joked. "Most of the stories are about America. We’re having tremendous fun. Because you guys are, like, ten times crazier than we are.

A couple of headlines from the Global Edition website to illustrate:

“Nostalgic Petraeus Playing a Lot of ‘Call of Duty’ There Days.”

Here’s another: “Study Finds Men Live Longer with Plenty of Beer, Fried Foods, and If Conversations are Kept Short."