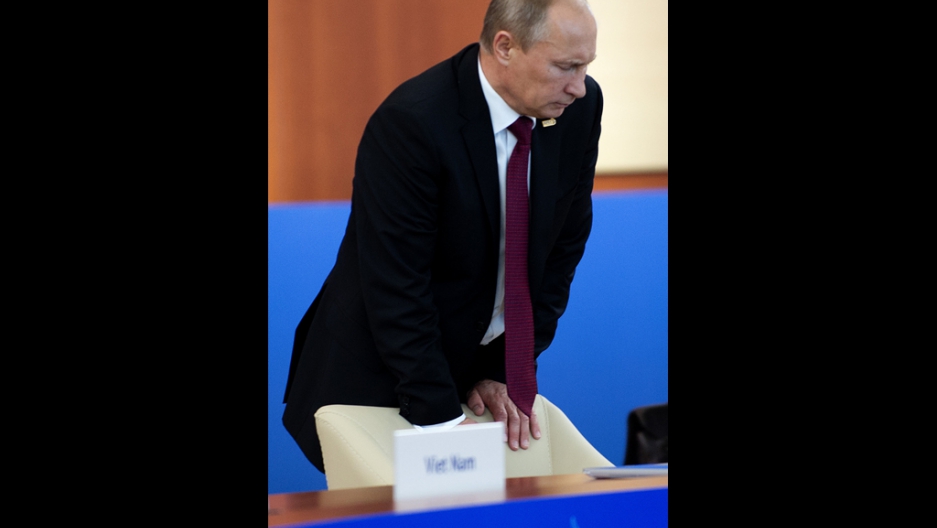 Russian President Vladimir Putin braces himself against his chair as he arrives to begin the Asian Pacific Economic Cooperation (APEC) Summit Leaders Retreat II in Vladivostok on September 9, 2012. The Kremlin has been trying to downplay rumors of Putin's health, specifically his back problems.
Credit: JIM WATSON
Share

More from GlobalPost: Putin limping leads to rumors of injury

Japanese media reported that Noda mentioned "Putin's health problems" while talking about postponing his planned visit to Russia, according to Radio Free Europe.

Putin's spokesman said no definite date had been set for Noda's visit, and denied that Putin's work had been affected by his health, according to the BBC.

Reports suggest that Putin, 60, is suffering from back problems.

The Atlantic noted that rumors began swirling after Putin was seen limping during a foreign summit in September. The photo shown here was taken on Sept. 9.

The president's press officer, Dmitry Peskov, said Putin has continued to participate in sports as usual, according to Russian news agency Interfax. "He has no intention of giving up sports. Like any sportsman, he can have pain in his back, hand, or leg, but it has never affected his ability to work," said Peskov.

The Wall Street Journal noted that the postponement of several trips abroad had also fueled speculation about Putin's health. A Russian business newspaper speculated that Putin may have aggravated an old injury during a publicity stunt near the end of September.

Belarussian President Alexander Lukashenko told Reuters that Putin's back problem stemmed from a judo accident. "I know he has this problem. He loves judo. He lifted a guy, threw him, and twisted his spine," he said.

"He tells me: 'We are not prepared yet to take on your team.' He has damaged his spine somewhere. In a judo match. He was on the mat and hurt his spine," Lukashenko told Reuters.

The Kremlin announced on Wednesday that Putin would travel to Turkey next week, after nearly two months in Moscow, the Journal reported.