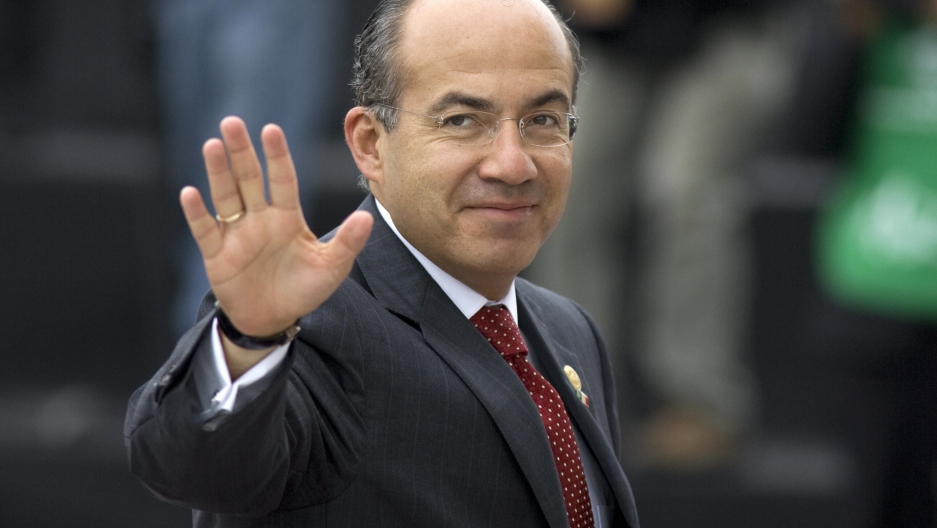 MEXICO CITY, Mexico — Shortly after President Felipe Calderon took office in December 2006, he flew to a military base in his home state of Michoacan to personnally address troops he sent out to fight drug traffickers.

To add impact to his message, he dressed in a green army uniform, breaking tradition in Mexico where rulers have shied away from donning military colors since the 1940s.

"New pages of glory will be written. I instruct you to persevere until victory is achieved," he told the soldiers. "We will give no truce or quarter to the enemies of Mexico."

This month, a beleagured-looking Calderon wearing a black suit went back to a military base to inaugarate a memorial for the 532 soldiers who had been killed or disapeared fighting the cartels in his term. More than 3,500 police were also murdered. The total drug war death toll was almost 60,000.

Rather than talking about pages of glory, he said the soldiers were to be remembered with "sadness and affection."

It was hard for Calderon to claim the victory he had called for. While soldiers and police had made record drug busts and brought down 25 of 37 top kingpins, seizures and purity rates indicate that the cartels traffic as much narcotics to the United States as they did six years earlier.

The shortcomings of this military offensive against drug gangs will be the resounding point in the history books on Calderon's presidency, which ends Friday. (Mexican presidents are limited by the constitution to a single six-year term, and Calderon retires to an Angelopoulos Global Public Leaders Fellowship at the Kennedy School in Havard.)

Calderon also fought through the global economic crisis and made some marginal reforms in Mexico's financial and energy laws during his administration.

But the conflict with drug cartels dominated his agenda. Soaring death tolls, massacres and mass graves forced him to keep reacting to the issue. Even as Calderon committed more soliders, rates of extortion, kidnapping and homicides attributed to the cartels more than tripled during his term.

When kingpins were arrested or died, the crime families simply replaced them with new leaders and reshaped the cartel map of Mexico with new groups and alliances.

"We suffered thousands and thousands of deaths and what did we achieve? Now we are back where we started," said Sandra Ramirez, a social worker in the slums of Ciudad Juarez, which saw some of the worst violence of the conflict.

A lifelong militant of the center-right National Action Party, Calderon began the offensive 10 days after taking office, sending troops to Michoacan and then more than 10 other states across Mexico.

In total, 50,000 soldiers, thousands of Mexican marines and a rapidly expanding paramilitary federal police joined in the crackdown on cartels from marijuana growing mountains to bullet-ridden barrios.

They were supported by about $300 million a year in aid from the United States under the Merida Initiative, in the form of training and hardware such as Black Hawk Helicopters.

The offensive was widely expected to dominate the headlines for a year or two before Calderon focused on other issues. Pundits thought it could be reminiscent of Richard Nixon's attack on heroin traffickers or Ronald Reagan's offensive against Miami's cocaine cowboys.

But against almost all expectations, the drug war esclated to become the most violent conflict in Mexico since the religous and revolutionary wars of the early 20th century.

Cartels formed increasingly violent armed groups, often with active or former police and soldiers in their ranks, and hit back against the security forces and each other.

These death squads unleashed attrocities comparable to brutal civil wars, including a single massacre of 72 people and mass graves with more than 200 corpses.

Soldiers fought hard to stop the cartels, killing more than 1,200 criminals during the period, according to Mexico's Defense Department.

But troops were also accused of murdering dozens of civilians, and a series of cases against them now waits in military and civilian courts.

"Ordinairy people were caught up between the military on one side and cartels on the other," said Gustavo de la Rosa, of the Human Rights Commission for the state of Chihuahua. "The military were convinced they could destroy the drug trade through force and killed innocent people as they tried to do it."

Innocent victims also died in crossfire or were deliberately targeted by cartels in their efforts to sew terror — sometimes with carbombs and grenade attacks in crowded city centers.

The offensive did produce some unprecented seizures of drugs and money. In March 2007, federal police found $207 million worth of dollars and pesos linked to meth money, in what the US Drug Enforcement Agency described as the "the largest single drug cash seizure the world has ever seen."

In October that year, Mexican marines stormed a ship off the Pacific coast and uncovered a world-record 23.5 metric tons of cocaine on a boat from Colombia. The haul could have been sold as 23.5 million gram doses on the US streets, fetching billions of dollars.

But the more that the government attacked cartels, the more the narco organizations unleashed violence against the state and civilians in retaliation.

"The cartels understand that you don't have to win big victories. If you create instability and terror then you turn people against the government," said Mike Vigil, the former head of international operations for the DEA.

Another fundamental problem was that every time one kingpin was arrested, his lieutenants and rival cartels fought over his territory, sparking more bloodshed.

For example, following the death of drug boss Beltran Leyva in Cuernavaca in 2009, the long peaceful spa town near the capital exploded with a wave of killings.

The problem gained special attention this June, when officers from the showcased federal police shot dead three of their colleagues in the Mexico City airport in an alleged fight over cocaine.

By his last year in office, Calderon himself questioned the possibility of beating cartels who were supplied by an estimated $30 billion trafficking narcotics to the United States.

This call has now been taken up by incoming President Enrique Pena Nieto, who on Saturday returns to power the Institutional Revolutionary Party, or PRI, which held Mexico's presidency for 71 years until 2000.

On a visit to the US this week, Pena Nieto said that in view of the decision by voters in Colorado and Washington state to legalize marijuana, an international review of drug policy is more urgent than ever.

Pena Nieto has also said he will change the priority from busting drugs to reducing the level of homicides, kidnapping and extortion.

Whether this will be achieved or not, communities that have been hammered by the violence still have much work to mend wounds caused in the fighting.

About 10,000 people have disappeared during the conflict, according to the National Human Rights Commission, leaving families still trailing the country looking for their loved ones. Tens of thousands of chidren have also been left fatherless.

"The scars from this war will be felt for decades," said Ramirez, the social worker in Ciudad Juarez. "We have to work now on the new generation and make sure they don't grow up to have a war that is even worse than this one."