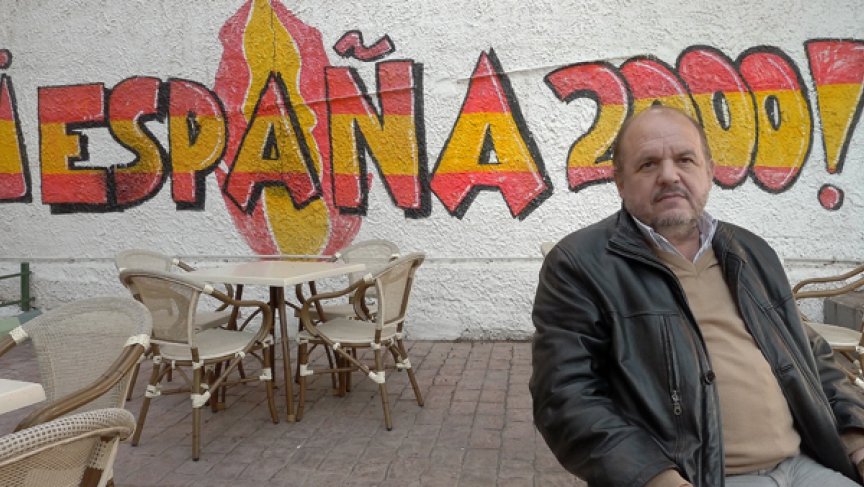 Spain 2000 President Jose Luis Roberto says he has tried to form alliances with other Spanish right-wing groups but squabbling has always undone any alliances. (Photo by Gerry Hadden.)

Adolf Hitler’s Mein Kampf is back in publication in Germany, at the same time neo-Naziism is on the rise there.

But that's not the only place where the radical right has made gains. It's especially so in Greece, where the Golden Dawn party now has members in Parliament. In Spain, the far right is faring less well, generally. Extremists have failed to capitalize on the economic crisis and joblessness to gain followers.

Although you could get the opposite impression in a small, Mediterranean village called Silla.

Silla is really traditional. Flower shops advertise free home delivery on Catholic saints days. On a recent morning a small car circulated, announcing the death of a neighbor, and the date and time of the funeral.

Outside the mayor’s office a man wearing a sandwich board sold daily lottery tickets.

Lottery venders are great people to talk to. They tend to know everyone, all the gossip. Jose Antonio Gutierrez saod a lot of people are out of work — and folks are increasingly blaming foreigners. He said that if there’s no work, Spain shouldn’t let outsiders in.

“My mother worked for years in France,” he said. “And when her contract was up, she got a kick in the pants and a one-way ticket home. Period. There’s no other way.”

Only about 13 percent of Silla are immigrants, about the national average. But sentiment is strong against them, in part because of something very non-traditional that happened in the town last spring: A radical, far-right political party, called Spain 2000, won two seats on the town council — a first for Spain.

“Our fundamental principle is to give priority to Spaniards,” said party President Jose Luis Roberto, sitting at the group’s headquarters in Valencia, about 20 minutes up the coast from Silla. “If you live in an apartment building and there’s a crisis and you don’t have enough for all the neighbors, you feed your own family first."

Every country in the world follows the same logic, he says.

Spain 2000 has a privately funded non-profit here that runs a homeless shelter and a cafeteria. Roberto said they offer no aid to foreigners as long as Spaniards are waiting in line. That’s earned the party a lot of monikers: racist, xenophobic, fascist.

Whatever the case, Spain 2000 and other far-right Spanish groups are using a formula that’s brought extremists in other European countries some power, especially during this crisis: providing social services along with a patriotic message.

But while Spanish groups have adopted the method, they haven’t found the same success as, say, Greece’s Golden Dawn or France’s National Front. In fact, no Spanish extreme-right politician has risen higher than town council, and you can even count those seats on your fingers.

One reason, Jose Luis Roberto admitted, is in-fighting. He said that while his party has a lot in common with other Spanish groups, such as a rejection of Islam and free market capitalism, other issues keep them divided.

“The problem is that politics is for idiots,” he said. “A while back, we joined a party called the Spanish Alternative. But they have a distinctly Catholic approach. So they backed out saying (they) couldn’t work with someone who ‘defends whores.’”

That’s a reference to Roberto’s former day-job, as head of an association of Spanish brothels. Prostitution is legal in Spain.

Roberto himself has been dogged by controversy for years. He’s been accused in an attempted bombing, and of various hate crimes. The charges have always been thrown out.

Another member of Spain 2000 is still under indictment resulting from a sting operation against neo-Nazis.

One activist in Valencia, who didn’t want his name used out of fear of retaliation, said this proves Spanish ultra-right parties have at least indirect links to violent groups — even if they deny it. He said in recent years several small explosive devices have been set off in the Valencia area. The targets: people or institutions on the left.

“It’s the same across Europe,” he said. “The extreme right will never admit any support or sympathy for fascists and neo-Nazis, especially not in Spain. With our fascist past.”

Spain was ruled by fascist general Francisco Franco for four decades, until his death and the transition to democracy. Even the suggestion that today’s far right is an off-shoot of Franco-style fascism turns many Spaniards away.

For other supporters of far right ideology though, reaching all the way back to Franco isn’t necessary. They can turn to the party currently in power in Spain, the center-right Popular Party or PP. The PP is huge, sort of an umbrella group for conservatives. And has its own extremist wing.

Last summer, Xavier Garcia Albiol, the Popular Party mayor of the Spanish town of Badalona, essentially stole Spain 2000’s thunder. He told reporters that because of the crisis, he would no longer be offering social services to newly arrived immigrants.

But analysts say you can’t write off Spain’s far right just because the movement is sluggish today. Before this economic crisis no one imagined Greece’s far right Golden Dawn party would ever amount to much.

Today it has 18 seats in Parliament.