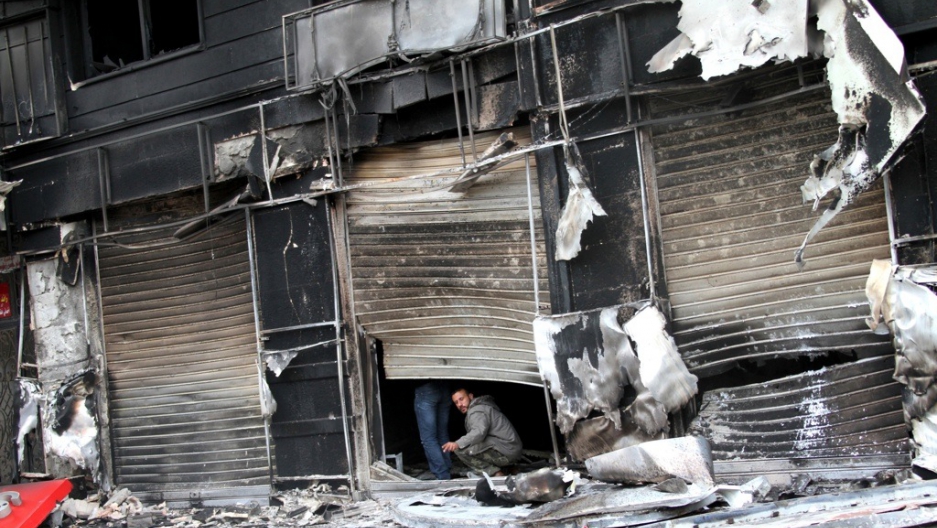 A man looks out below the shutter of a burnt-out building in the northern city of Lattakia, a stronghold of support for Syrian President Bashar al-Assad.
Credit: Anwar Amro
Share

LATTAKIA, Syria — With coffins stacking up at the airport in Syria’s Alawite heartland, and funerals now a daily routine for its mountain villagers, support is fraying among the community on which the Syrian regime depends.

“Day by day the military operations are getting harder and harder,” said Abu Haider, 40, a member of the Syrian security forces, near Qerdaha, the home village of President Bashar al-Assad.

“The Alawites will fight to the end to defend President Bashar but are paying a big price. Most of our men are serving in the army or security forces,” he told GlobalPost.

Ali, a 28-year-old Alawite living in Lattakia, the regional capital, said Alawite villages he recently visited had been nearly emptied of men after the regime enforced conscription for any member of the Alawite sect aged between 18 and 50.

Alawites are the minority off-shoot of Shiite Islam to which the president’s family belongs. The conflict in Syria has increasingly become a sectarian war between the Alawites and the Sunni majority rebels.

More from GlobalPost: The fight for Iraq plays out in Syria

“Every day there are 50 to 60 wooden coffins brought through Lattakia’s Bassel al-Assad Airport. There are funerals in most villages every day,” he said. “The regime’s media used to cover the martyrs’ funerals but in the last few months they stopped broadcasting news of dead soldiers.”

And with good reason: More than 40,000 people have now been killed in the 20-month uprising, according to human rights groups. And in recent months, the numbers of soldiers and security men dying has reached, or at times surpassed, the rebel death toll.

Civilians continue to pay a high price with about 20,000 killed, including more than 3,000 children. But at least 10,000 of Assad’s men have also been killed.

With ever more coffins flown home from a war now being fought in almost every province, the Alawites — whose support the regime relies on most — are beginning to question their sacrifice.

Abu Yasser, 50, a former political detainee and one of the few Alawite figures who dares to oppose the regime, recounted from his farm outside Lattakia the reaction of an Alawite woman who had just received home her dead son, a captain in the army.

“She said, ‘Is this enough for you Assad family? Hafez killed my father in the 1973 war, killed my husband in the 1982 war in Lebanon and today Bashar has killed my son, all to keep power for his family,” Yasser said.

In a village neighboring Madehleh, the birthplace of Assad’s brother-in-law, Assef Shawkat — a long-time security chief assassinated in July — 50-year-old Mohammed said he prefers farming to politics. Representative of the still-large rural underclass of Alawites who saw little benefit from the Assad family’s rise to power, Mohammed questioned why so many of his neighbors’ sons had died.

“All those officers like Assef gave the young the chance to pay a big bribe and join the security forces. And today they are being killed to keep the regime in power,” he said.

Increasingly, it seems the regime's violent hold on power is waning.

In recent weeks, the rebels battling to topple Assad and his regime have seized effective control over key areas of the north and east, making stunning gains that analysts say could tip the balance of the standoff.

Assad’s forces are no longer in control of major border crossings to both Turkey and Iraq, Syria’s northern and eastern neighbors. Rebels are still dug in across at least half of Aleppo, Syria’s largest city. And the regime suffered significant defeats last week with the loss of a strategic military base in the north and another in a key oil-producing region of the east.

Base 46 was the regime’s last major outpost along its border with Turkey. Turkey, a NATO member that backs the rebels, recently requested the alliance deploy Patriot missiles along its border, a move decried by Damascus as a first step to a no-fly zone.

Over-running Base 46 after weeks of siege, rebels made off with more than a dozen tanks, artillery cannons, mortars and rocket launchers, some of the heaviest weapons to fall into their hands since the start of the uprising a year and a half ago.

Rebels say the Sheikh Suleiman base — the final army garrison between Aleppo and the Turkish border — will also soon fall after a two-month battle, giving them full control of a sizeable and contiguous stretch of land between a major city and a friendly border for the first time.

“Rebel gains in recent days give them access to weapons that could tip the military balance in their favor in the north,” said Alison Baily, a Middle East analyst at Oxford Analytica, a global analysis and advisory firm. “The regime does not have the manpower to reverse these gains.”

Alongside the capture of another key base in Saraqeb earlier this month, rebels in the north are increasingly able to choke off supply routes for Assad’s troops battling to re-take Aleppo. Despite holding large areas of countryside, the rebels have yet to exert full control over a major city.

“Regime soldiers who joined us recently said some of their units had not been resupplied with food or fuel for weeks,” said Abu Abdu, a fighter with Liwa al Tawheed, a leading Islamist rebel group in Aleppo. “The regime is sending supplies by the airport, so that is what we will destroy next.”

In the remote desert region of Deir Ezzour, home to well-armed tribes that straddle the border with Iraq, rebel fighters also overran the military base at Mayadeen on the Euphrates River, giving them control over most of the river valley, stretching from the regional capital to the border crossing at Al Bou Kamal.

Two of the region’s three oil fields are now in rebel hands, with trucks lining up to buy $5 barrels of the light crude, a smoky but reliable fuel, as winter sends temperatures plummeting and government supplies dwindle to nothing.

Baily said Syria is now facing a de facto partition between tribes in the east, Kurds in the northwest, Islamist rebels in Aleppo and Idlib, and regime loyalists in Damascus and the Alawite heartlands of the west. This leaves the recently united political opposition, based outside Syria, with the challenge of gaining legitimacy inside the country.

“The rebels are in snowball process, strengthening with each base and arms depot they capture,” she said. “As the country fragments, the most likely scenario is that the regime is ground down into a well armed militia.”