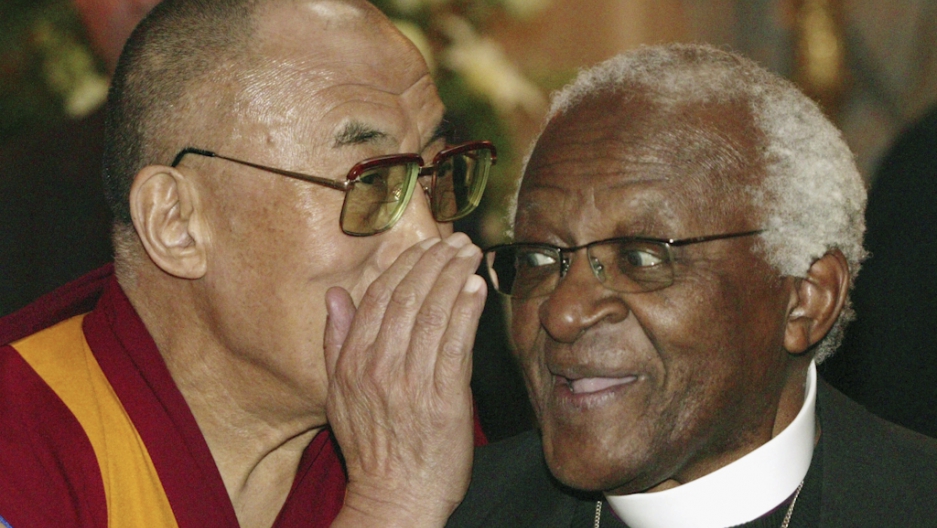 The Dalai Lama speaks with his good friend and fellow Nobel Peace Laureate, Archbishop Desmond Tutu, at a 2006 event in Belgium. The Tibetan spiritual leader has applied for a South African visa to attend Tutu's 80th birthday party, but there are fears South Africa may block his visit amid pressure from China.
Credit: Mark Renders
Share

JOHANNESBURG, South Africa — The South African government acted unlawfully by "deliberately delaying" a decision on whether to grant the Dalai Lama a visa last year, a court has ruled.

South Africa had been accused of pandering to China by dragging its heels on a visa request from the Tibetan spiritual leader, leading to the cancelation of his planned trip to attend the Archbishop Desmond Tutu's 80th birthday party in October 2011.

The Supreme Court of Appeal on Thursday said former home affairs minister Nkosazana Dlamini-Zuma, who is now head of the African Union, had "unreasonably delayed her decision whether to grant or withhold the visas ... and in so doing acted unlawfully."

Archbishop Tutu at the time called the South African government's refusal to issue the Dalai Lama a visa "disgraceful" and “a total betrayal of our struggle history."

"We are shamelessly succumbing to Chinese pressure,” he said.

The Office of Tibet in Pretoria welcomed the court ruling and said the Dalai Lama has expressed a desire to visit South Africa again, although a date for his trip has not yet been set.

“We believe this will open the door for His Holiness to visit South Africa,” said Migyur Dorjee, Tibet’s representative for Africa. “He is looking forward to seeing Nelson Mandela again. He has lots and lots of friends in South Africa.”

China says Tibet was always part of its territory, and derides the Dalai Lama as a "splittist" and a "wolf in monk's clothing." But many Tibetans argue the region was effectively autonomous for centuries, and accuse Beijing of suppressing their religion and culture.

The Dalai Lama has lived in exile in India since 1959 after fleeing a failed uprising against Chinese rule in Tibet.

While he insists he seeks only more autonomy for his homeland, not independence, Beijing remains sensitive about Tibet amid continuing tensions, including a spate of self-immolations by Tibetans in China.