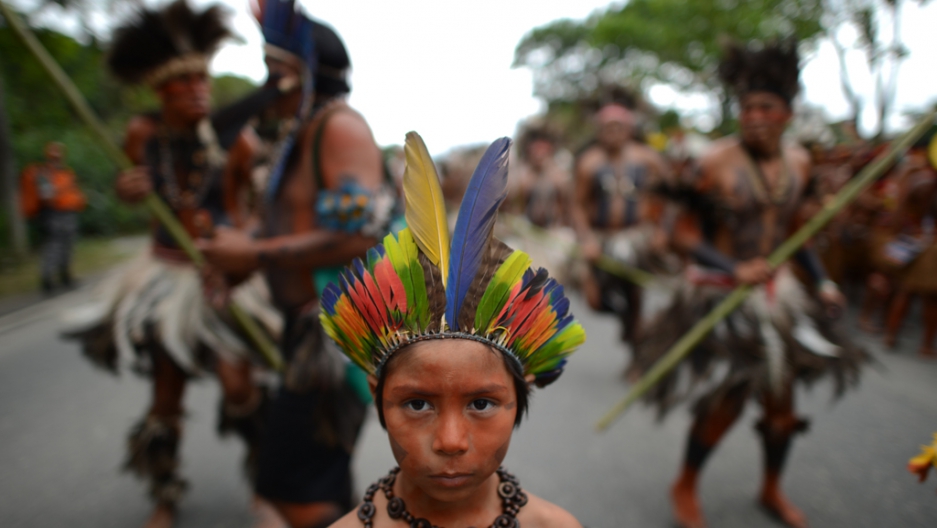 Amazon.com shouldn't mess with its namesake jungle, say Peru and Brazil, home to indigenous peoples such as this group at the Rio+20 sustainable development summit in Rio de Janeiro, Brazil in June.
Credit: Christophe Simon
Share

LIMA, Peru — In the latest battle over coveted web domain names, there's a rumble in the jungle — pitting Amazon vs. the Amazon.

The two South American countries have lodged a formal complaint with the Internet Corporation for Assigned Names and Numbers (ICANN), the Los Angeles-based nonprofit private organization that oversees the assignment of new web addresses.

In the complaint, the governments of both countries warn if the e-commerce giant registers the “.amazon” URL ending it “would prevent the use of this domain for purposes of public interest related to the protection, promotion and awareness raising on issues related to the Amazon biome.”

Brazil has the largest expanse of Amazon rain forest, followed by Peru. Together they account for 73 percent of the vast jungle.

ICANN spokesman Andrew Robertson told GlobalPost that it was possible the two South American governments could get their way.

“I would have to say, yes, there is a possibility that the domain will not be approved,” he told GlobalPost. “There is an approval process and we are still in it.”

Robertson added, “It was always anticipated that there would be objections by governments. It’s a completely new take.”

The two governments are among the 40 members of ICANN’s Government Advisory Committee, established to give states a say in the rapidly evolving system of internet domains, in particular the new so-called generic Top-Level Domains (gTLDs), which would include “.amazon.”

The idea is to allow new domains beyond the current standard endings such as “.com,” “.edu,” “.org” and a host of others including country suffixes.

The internet corporation received more than 1,000 applications for new gTLDs before the June deadline closed, including for “.gay” and “.islam.”

The governments of India and the United Arab Emirates have objected to the latter, on the grounds that it could be used inappropriately to stoke tensions or offend Muslims.

Meanwhile, Saudi Arabia, where homosexuality remains outlawed, has objected to the former.

In Brazil and Peru’s objection, they also noted that the “.amazon” suffix uses part of the name, in English, of the Amazon Cooperation Treaty, signed in 1978 by eight Amazonian nations to collaborate on issues of common interest including development, conservation and defense.

The objection is supported by non-advisory committee members Bolivia, Ecuador, Guyana and Argentina. All, except the last, are Amazonian countries.

The internet corporation will now send Amazon.com an “early warning” requesting the company’s justification for applying. That response will be taken into account, as will the objection by Brazil and Peru, but neither is binding on the organization as it makes its final decision.

If ICANN does reject Amazon.com’s application, it would then return the $185,000 registration fee. So far, ICANN has collected $350 million for the registration of new gTLDs.

Amazon.com Inc. did not respond to GlobalPost’s requests for comment. It is understood that the company’s established domain, www.amazon.com, is not at risk.