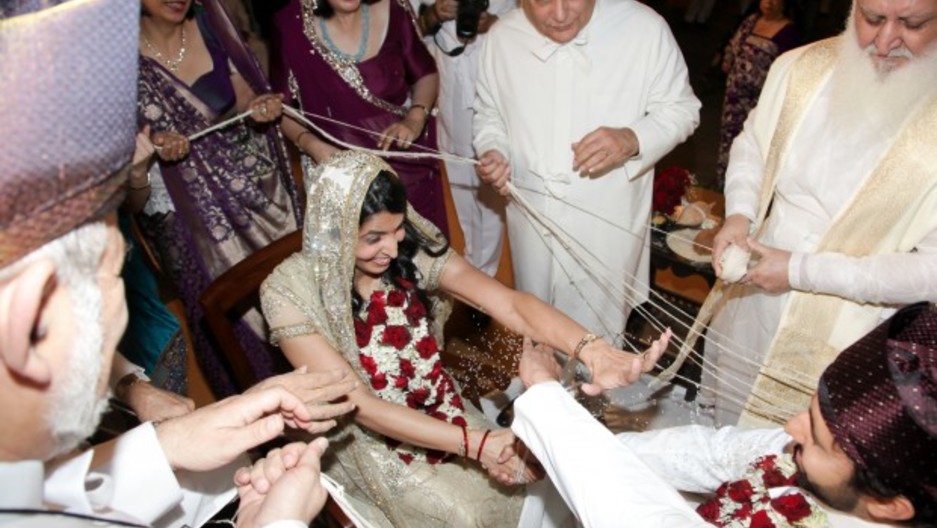 Share
It isn't easy these days being a Parsi. The Parsis are a community of Zoroastrians that settled in South Asia. They are followers of the religion of ancient Persia. In Pakistan they are concentrated mostly in the port city of Karachi. They have made quite a remarkable impact on the metropolis, but the size of the always small Parsi community in Karachi is in decline. That's just a drop in the ocean of a city that has a total population of over 14 million. Zane Byramji and Tashan Mistree's are a twenty-something Parsi couple now living in Karachi. Five years ago, they met at an international Zoroastrian youth event in Australia. "I didn't want to go at first," says Byramji. "I was pretty hesitant because I thought it was more focused on religion than anything else. I wanted to make a holiday out of it. That's where I met Tash." "We don't have arranged marriages, but we have a lot of pressure coming from parents and friends," explains Byramji. Mistree chimes in: "We always say the grandmas and the aunties all have a club. and they are all kind of in cohort together and try to hook people up." Byramji was born and raised in Karachi. He went to Canada for college and now works at his family's brokerage firm. Mistree was born in Washington DC and was living across the border in Mumbai, India before their marriage. "I didn't realize it would really work out because a week after the congress we met in Melbourne," says Byramji. "And from there we started talking and we flew back to India and Pakistan, and then spoke on the plane for ten hours and decided to be in a relationship." They got married in Mumbai last year. Mistree moved to Karachi to live with Byramji. Her move comes at a time when the population of Parsis in Pakistan is dwindling. There are now fewer than 1,700, down from more than 7,000 several decades ago, mostly in Karachi. The Parsi community is defined largely by their adherence to the Zoroastrian religion — the religion of ancient Persia. Sometimes they are referred to as "fire-worshippers" because of the central role that fire plays in their rituals. Their temples each have a consecrated fire that burns continuously – some of the fires have been kept alive for centuries. In a community center in Karachi, priests are gathered around a small fire, reciting a prayer in an ancient dialect of Persian. The priests wear masks covering their mouths and noses so that the fire is not desecrated by their breath or saliva. According to tradition, a group of Zoroastrians arrived in South Asia over a thousand years ago, fleeing the Muslim conquest of Persia. The community prospered, especially as merchants. The Parsi community in Karachi has always been a small minority, but it's left an unmistakable legacy. One of the most celebrated mayors of Karachi was a Parsi, serving for twelve years. Local buildings and schools named after prominent Parsi businessmen dot the old city. But this legacy is now at risk. Parsis have a lower birthrate than the national average. And there's more and more intermarriage. So Mistree and Byramji's families were relieved that they both got married to Parsis. Another major reason for the dwindling population in Karachi is migration to Western countries. Byramji says the majority of his relatives, for example, now live in the West — mostly in the US, Canada, or the UK. "Everyone has left the country," he says. "I wouldn't even say that 10% are here now, and I would say 50% left in my life time." In recent years, the motivation to leave Pakistan has been compounded by the extremely volatile political and security conditions, a sentiment reflected among both the young and old in the community. Alla Rustomji, a fifty-five year old home-maker, says she would be happy to stay in Pakistan for the rest of her life, except for her children. "They are in their early 20s," says Rustomji. "I am not very happy at all. I would like the first opportunity to get them out of the country. I'm sorry to say, though I love Pakistan, and I would like them to be here, but I do not see a very good future for them." More than half the Parsi population in Karachi now is over fifty years old. The local clergy is aging, without anyone to replace them. "At our fire temple, we have three priests. Two of them are more than 80 years old," says Shahveer Byramji, Zane Byramji's uncle and a managing trustee of one of the two fire temples in the city. He says the only trained Zoroastrian priests are in India, and that they tell him they won't move to Pakistan "for all the money in the world." Given the rate at which the population is declining, Shahveer Byramji says it's entirely possible that there soon won't be a Parsi presence in Karachi. "Let's face it, we are a declining population. There's not much we can do about it, except for openly converting, which we're all against. So, it's a fact of life that we're a dying breed and let's just try to do the best we can with what we have." Even for Tashan Mistree and Zane Byramji, the prospect of leaving Karachi isn't ruled out. Over the generations their families have moved from Iran, through India and Pakistan, to North America and Australia. Making another move, they say, is something their stock is used to. "We did it a thousand years ago, so its not so hard now," says Mistree.