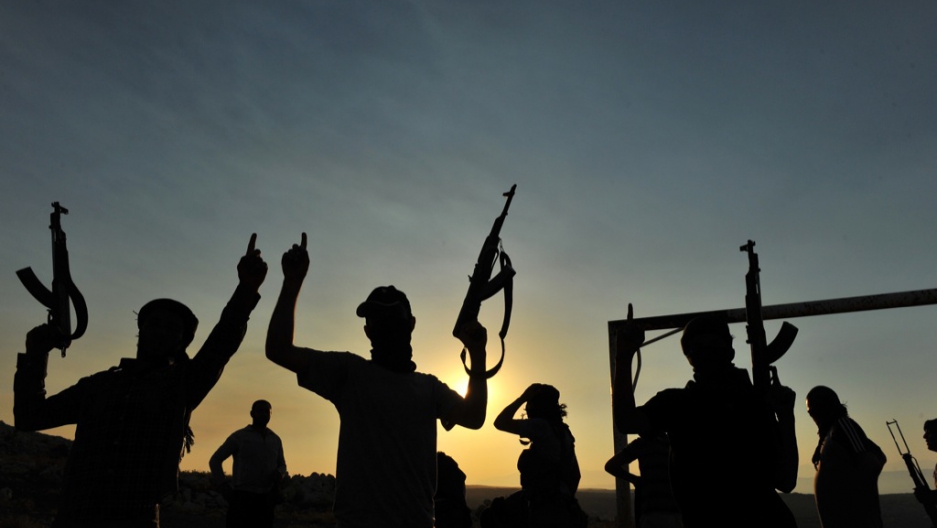 DAMASCUS, Syria — Divided by history, geography and God, Abu Mohammed and Abu Hamza both smoke Marlboro cigarettes and agree on one point: The war for Syria is also a war for Iraq.

Driven from their homes by the 2003 US-led war in Iraq, both men, now in their 40s, found refuge for themselves and their families in neighboring Syria.

Nearly a decade later, both are back in the country that once sheltered them.

But this time their wives and children are no longer with them. The men are not in Syria to flee a war, but to fight one. Abu Mohammed, a Sunni, is training rebels in Aleppo. Abu Hamza, a Shiite, is battling alongside President Bashar al-Assad’s forces in Damascus.

Their involvement in Syria is further evidence that the war is evolving into an extension of the Sunni-Shia violence that Washington unleashed when it toppled Saddam Hussein.

“People ask me why a Sunni Iraqi is fighting in Syria and I have a simple answer: 'I am fighting in Syria to liberate my country, Iraq, from the pro-Iranian Shiite militia,” said Abu Mohammed, 46, dressed in military fatigues, with a short greying beard, cigarette in one hand, sniper rifle in the other.

Iraq, said Abu Mohammed, was now “occupied” by Shiite militias: The Mahdi Army, led by Iraqi cleric Muqtada Sadr who has long ties to Iran; the Badr Brigade, armed and trained in Iran and formerly the armed wing of the Islamic Supreme Council of Iraq; and Iran’s own Quds Force.

Abu Mohammed considers Syria’s Assad regime ― led by members of the Allawite sect, an ancient off-shoot of Shiite Islam ― to be another arm of Iran’s attempt to dominate the Sunni-majority Middle East.

“If the Syrians finish the Assad Allawite regime, then Iraqi Sunni can get more support from a new Sunni leader in Syria to finish the Iranian influence in Iraq,” he said.

One might expect such overtly sectarian rhetoric to be delivered in anger. But in an interview with GlobalPost in Aleppo, Abu Mohammed was the model of Arab hospitality, softly spoken and thoughtful.

As a former captain in Saddam Hussein’s security services, Abu Mohammed said he fled to Damascus with his wife and two children shortly after the 2003 invasion, via his home province of Anbar, the desert tribal region of western Iraq that borders Syria.

After receiving threats from what he said were Iraqi Shiite militias based in the southern suburbs of Damascus, Abu Mohammed moved his family north to Aleppo, Syria’s largest city, where the majority are conservative Sunnis.

There, in addition to starting a thriving business trading cotton socks and underwear between Aleppo and Baghdad, Abu Mohammed said he helped Islamist preachers smuggle Syrian and foreign extremists from Syria into Anbar to fight US-led troops. All of this, he said, was done with the consent of the then all-powerful Syrian security apparatus.

Abu Mohammed’s convergence of interest with the Assad regime quickly fell apart, however, after the brutal crackdown began in March 2011 on Syria’s mainly Sunni-led protest movement.

“I sent my family back to Iraq. For more than a year, Aleppo was away from the problems. But I saw how those Shiite shabiha (pro-regime militiamen) were setting up checkpoints and humiliating Sunni farmers. They put up posters of Iran’s (Ayatollah) Khamenei and Hezbollah’s Hassan Nasrallah. So I saw it was a sectarian war in Syria between the poor and weak Sunni protesters and the Assad regime, which is getting support from Iran, Hezbollah and Iraq’s (Prime Minister Nouri) Maliki,” he said.

Abu Mohammed said he now makes regular trips back to Anbar, sneaking across the border with help from Syrian rebels, to encourage members of his extended Dulaim Tribe to join the war in Syria.

“I am not a particularly religious man but I practice all Islamic rituals and duties. But I am considered very Sunni because of my tribe and how we suffered from Shiite groups in Iraq,” he said.

During the early years of the war, US officials knew Anbar as the heartland of Al Qaeda in Iraq. Al Qaeda found support in Anbar among Sunni tribesman who resented their loss of power after Saddam fell and Shiite death squads began sectarian cleansing in Baghdad’s Sunni-majority neighborhoods.

Abu Mohammed draws from his long years of experience in Saddam’s Baathist security services to help Syrian rebels in Aleppo create a “security apparatus” to root out regime spies.

“The intelligence war is very important these days,” Abu Mohammed said. “If we can destroy the headquarters of the security branches in Aleppo, then the whole city will be in our hands in a few days.”

“I am not fighting in Syria to make money,” he insisted when questioned about his source of finances. “I am here looking for jihad for God’s sake. I want to be a martyr, not a mercenary.”

In Damascus, two hundred miles south, and some 1,300 years along a different path of religious history, Abu Hamza al-Ta’ay also smoked as he discussed his role in Syria’s civil war.

A burly giant of a man with a shaved head, Abu Hamza dressed in the flowing black robes of a pious Shiite, a symbol of mourning for the death of Imam Ali, who Sunni believe was the fourth of Mohammed’s ‘rightly guided Caliphs,’ but who Shiites insist was his rightful successor.

Abu Hamza was shot in the leg fighting with the Mahdi Army during the May 2004 US assault on Karbala, an Iraqi city holy to Shiites. Afterward, he relocated to the Damascus suburb of Sayeda Zeinab, home to a shrine Shiites believe contains the remains of Prophet Mohammed’s granddaughter.

By 2009, Abu Hamza had moved back to Iraq. But it was to the same shrine in Sayeda Zeinab that he returned, with an estimated 500 to 600 other Iraqi fighters, this July. They came to protect it from the “heretic” Sunnis, he said.

“I kept my ties with the Mahdi Army but stopped any military action inside Iraq. I got married and had three children. I have a small shop in Karbala,” Abu Hamza told GlobalPost as he drank tea in a house near the shrine. “When the unrest began in Syria I was not interested in it, in the beginning. But later I and all Shiites began to see slogans (by protesters) such as ‘Not Iran nor Hezbollah. We want people who fear God.’ The protesters burned Iranian and Hezbollah flags. We saw them not as protesters, but as anti-Shiite.”

In the middle of the scorching Karbala summer, Abu Hamza said, he had a visit from one of his former Mahdi Army leaders.

“He told me I should travel to Syria to protect our shrines from the Damascene Nawasib (Heretics) who took the Caliphate from Imam Ali and killed his sons and grandsons and who today want to kick all Shiites out of Syria. I accepted it as a religious duty,” he said.

Arriving in Sayeda Zeinab after the long overland journey by car from Karbala, Abu Hamza said he was warmly welcomed. Members of the regime’s so-called Popular Committees, a civilian militia paid and armed by Assad’s security forces, gave him a Kalashnikov.

Daily patrols of the shrine and mundane searches soon became a battle battle with the mainly Sunni rebels from surrounding Sayeda Zeinab.

“We have experience in this kind of war and how to use heavy weapons,” he said. “We got support from the security services and the government army to face the attacks.”

“Most Iraqi Shiite left Sayeda Zeinab so we have become like strangers in the area. We are considered shabiha by the rebels and so should be killed. Syrians have begun to hate us and discriminate against us. They don’t accept to rent us their homes, sell us goods or even drive us in taxis. When I lived in Syria before, no one asked about my background. But today, it is clear Syrians began to hate Shiites, whether Syrian, Lebanese, Iraqi or Iranian.”

While Abu Hamza and Abu Mohammed frame their fight as a religious duty, politics is never far away.

Just as in 2003, when Iraq’s future Shiite politicians were living in Damascus, awaiting the outcome of the US-led war in Iraq, so today Abu Hamza sees the political fate of Iraq’s Shiites as being decided in Syria.

“The future of Iraq’s Shiite political leaders will be decided in Syria,” he said. “If the Sunnis win then Iraqi Sunnis are going to lead Iraq again and be stronger because they will get big support from their Syrian brothers. Iran will be weaker and Hezbollah will lose its arms and support.”

Hugh Macleod reported from Beirut. A GlobalPost journalist, whose identity is being kept secret for security reasons, reported from Damascus.