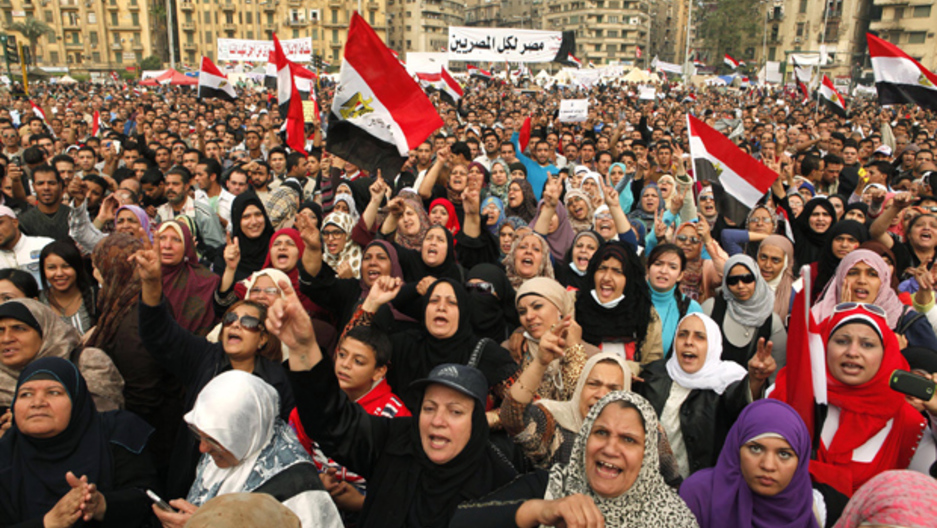 Tahrir Square looks a little bit like it did during the Egyptian revolution.

Banners are strung from the trees, bearing messages like, “Egypt for all Egyptians.” At the center of the square there is a cluster of about 60 tents. In front of one tent sits Naguib Abadir, a member of the liberal Free Egyptians Party.

“We are very proud that the Free Egyptians Party had the first tent erected in Tahrir Square a few days ago,” Abadir said.

But Abadir says it isn’t about who was here first.

“We are also very much aware that although we started it here in the square as one party, we are meeting with the different parties on a regular basis, twice and three times a day and coordinating our efforts,” he added.

And that’s what Egyptian opposition forces are trying to do: coordinate. After the revolution, liberal and secular groups were plagued by internal squabbling, The better-organized Islamists and the Muslim Brotherhood easily rose to power.

Now, the opposition is seizing on President Mohamed Morsi's decree that his decisions are above judicial review as a rallying cry. Several parties have united, calling themselves the National Salvation Front.

“The last time I went to Tahrir Square, as a participant, was the day after Mubarak was ousted," Kassem said. "Feb. 12, 2011. But today, I am going out to join the protesters against Morsi.”

During Hosni Mubarak’s rule, Kassem sometimes found himself advocating on behalf of Muslim Brotherhood members who were imprisoned on trumped up charges. So, when Morsi won the presidency, Kassem was prepared to give him the benefit of the doubt. Morsi’s decree last week changed all that.

“At this point, I have reached the position where I think the Brotherhood are not political adversaries or rivals. The Brotherhood are a menace to the political process," he said. "They do not understand democracy and the minute they felt that they were unable to operate democratically, this stupid move to try and simply push everybody out and take full power.”

Rallies in Tahrir Square by groups across the political spectrum are common now in Egypt but some analysts, including Yasser El-Shimy, Egypt analyst at the International Crisis Group, say the secular opposition needs to do more than simply call for protests if they want to gain political influence.

“I think it’s wishful thinking for the non-Islamist opposition to think that going to Tahrir would simply help re-establish their image as a viable alternative to the Muslim Brotherhood,” he said.

El-Shimy says the opposition has some important lessons to learn about organizing — not just in urban centers like Cairo, but in Egypt’s rural towns and villages.

That means the secular opposition might want to take a page from the playbook of another former opposition movement that appears to have done it best: Morsi's Muslim Brotherhood.