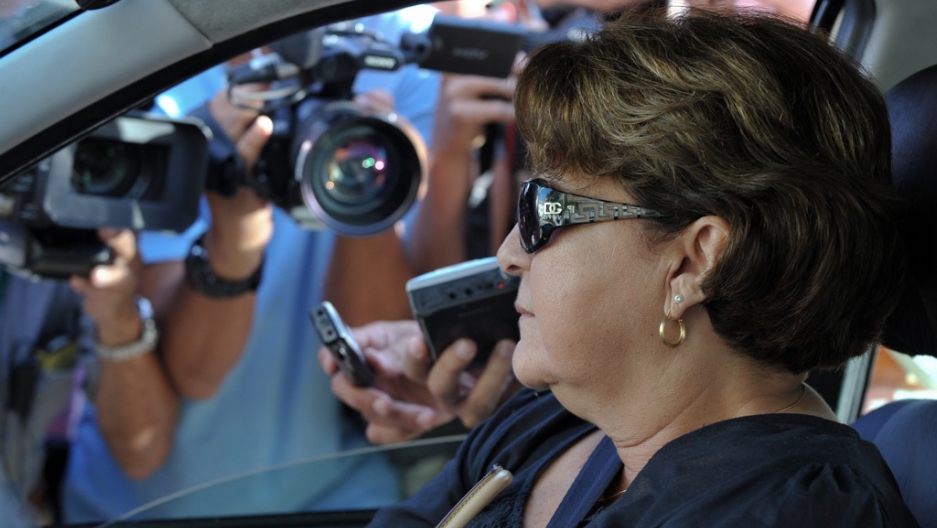 Nuris Pinero, lawyer of US contractor Alan Gross, talks with journalists upon her arrival at the Supreme Court in Havana, on July 22, 2011.
Credit: Adalberto Roque
Share

Editor's note: Updates with new claims about the health of Alan Gross, an American jailed in Cuba for three years.

HAVANA, Cuba — During the three years that US contractor Alan Gross has been imprisoned here, he and his family seem to have passed through several stages of grief.

First there was the outrage at his arrest. Followed by contrition, and appeals for clemency to Cuban President Raul Castro.

Then Gross was sentenced to 15 years in prison, and desperation set in.

Now, with the three-year anniversary of Gross’s arrest on Dec. 2 and no sign he will be freed any time soon, Gross and his family have moved to the next stage: litigation. They are suing his former employer, Development Alternatives, Inc., and the US government for $60 million in federal court, claiming Gross wasn’t properly warned about the dangers he faced working on the island.

The family has generally avoided criticism of US officials until now, and the lawsuit suggests they may be losing faith in Washington’s ability to free him.

Gross’s wife, Judy, has said she hopes President Barack Obama’s re-election would create a new opportunity for her husband’s release. Since Obama no longer faces any electoral pressures to win Florida, he appears to be in a better position to withstand heat from that state’s anti-Castro Cuban American lawmakers who are dead-set against any deal with Havana to bring Gross back. Or so the thinking goes.

And a deal is precisely what Cuban authorities are dangling. They want to swap Gross for the so-called Cuban Five, a group of Cuban intelligence agents who are serving long prison terms in the US.

American officials have been unwilling to negotiate, and such an arrangement — even a partial swap of Gross for some of the Five — would be a difficult for President Obama to pull off. But it would have been unthinkable under a Romney administration, said Arturo Lopez Levy, a Cuba scholar at the University of Denver.

“Obama, who said that he was ready for a dialogue with Cuba to promote American national interests, owes nothing to the pro-embargo lobbyists who presented the president's policies as ‘unilateral appeasement’ and paid spurious ads connecting him to Hugo Chavez and Raul Castro's daughter,” said Lopez Levy, referring to GOP attack ads broadcast in Florida prior to the election.

“Given the history of conflict between Cuba and the United States, it is better to be skeptical, but stars might align in Gross's favor,” he said.

A Cuban court convicted Gross of “acts against the independence territorial integrity of the state” in March 2011 and sentenced him to a 15-year prison term, which he has been serving at a Cuban military hospital.

Even US legislators who favor changes to Cuba policy say no improvement in bilateral relations is possible until the Castro government lets Gross go.

Many view Cuba’s decision to jail him as akin to hostage taking, seemingly having arrested the American with the explicit purpose of using him as a bargaining chip. They bristle at comparison between Gross, who was trying to set up unauthorized internet connections on the island, with the activities of the Five, who are bona fide Cuban government spies.

The distinction is lost on Cuban officials. Even though Gross was a subcontractor working for a company contracted by the US Agency for International Development (USAID), they still see him as an American agent and an instrument of a US policy whose stated purpose to undermine Castro rule.

"For all Mr. Gross's mistakes, he was a US government operative and the United States should not abandon him," said Phil Peters, a Cuba expert at the Virginia-based Lexington Institute. "And in a context where the Cuban government frames the issue as one of sovereignty, the US defense of a program that sends political contractors into Cuba has probably made his situation worse.”

“For Mr. Gross's sake, it would be good for the administration to set politics aside and find a way to negotiate his release," he said.

US officials have repeatedly characterized the 63-year-old Gross as a simple humanitarian who wanted to help Cuba’s Jewish community connect to the internet. But Gross was paid nearly $600,000 for his Cuba work — perhaps one reason he continued returning to the island despite his fears of getting caught.

According to the family’s lawsuit, Gross was neither properly trained nor properly warned about the risks he was taking by placing himself in the middle of US-Cuba hostilities. He didn’t even speak Spanish.

Gross was attempting to carry out what was essentially a covert operation in Cuba, one in which Cuban intelligence had a keen interest in stopping.

And Gross began to worry as he made repeated trips to the island to set-up unauthorized satellite-based internet networks that were beyond the Cuban government’s control. His memos to the company and USAID officials cautioned that his missions were “very risky business,” akin to “playing with fire,” according to the lawsuit.

“Defendant DAI failed to take any action to protect Mr. Gross in response to the concerns expressed,” the lawsuit states. “Instead, Defendant DAI ignored these concerns, continued business as usual, and thereby continued to generate revenue from the Cuba ICT Project and other projects with USAID.”

More from GlobalPost: Israelis traded 1,000 Palestinian prisoners for one Israeli, why can't US give up a few Cubans for one American?

DAI is guilty of “putting profits before safety,” the filings allege, claiming it earns roughly $300 million a year from contracts with USAID, amounting to roughly three- quarters of the company’s total revenue.

“Mr. Gross is imprisoned in Cuba due to his work on a project that Defendant United States negligently directed, organized, and oversaw, and that Defendant DAI, the government contractor chosen for the project, conducted not only negligently, but also with gross negligence and a willful disregard for Mr. Gross’s rights and safety,” the lawsuit states.

As they move ahead with litigation in the US, Judy Gross and the family’s attorneys have stepped up their campaign to pressure the Cuban government. They have released a letter to Raul Castro from 500 US rabbis urging him to let Gross go. They have filed a complaint against Cuba with the United Nations Special Rapporteur on Torture, claiming Gross could have cancer but has been denied proper medical caree.

On Tuesday Cuba's Foreign Ministry issued a statement saying that Cuban physicians had tested a growth on Gross's shoulder to determine if it might be cancerous. The results were negative, it said.

The test results were shared with US officials in Havana, who forwarded them to Gross's family, the statement added. A US rabbi who visited Gross Tuesday and who is also a physician, Elie Abadie, told The Associated Press that Gross appeared to be in good health and did not have cancer.

Judy Gross said she also plans to redouble efforts to pressure the Obama administration in the coming weeks, but described her husband as a geopolitical “pawn” in an interview with Reuters. “He's a pawn in the sense that Cuba wants something for him, and the United States is unwilling to give that up," she said.