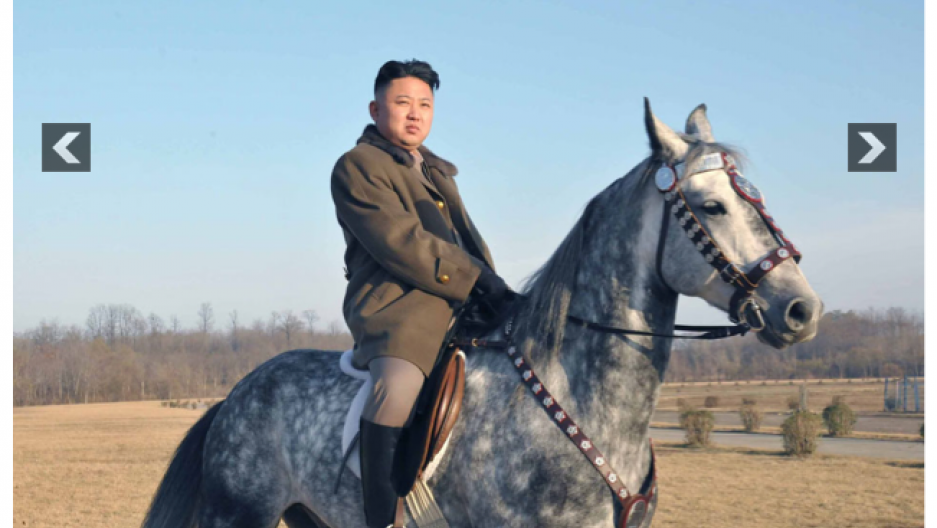 World, this is a public service announcement: the Onion writes satire.

It seems, astonishingly, that some people still don't know that. Lots of people! Actual people! And some of them are newspaper editors!

Not one but two major papers have taken the Onion at its word when it describes itself as "America's finest news source." Fine it may be, but news it certainly ain't.

The original article, dated Nov. 14, paid homage to young Kim's "devastatingly handsome, round face, his boyish charm, and his strong, sturdy frame" ... "an air of power that masks an unmistakable cute, cuddly side" ... "his impeccable fashion sense, chic short hairstyle, and, of course, that famous smile."

Supposed "Style and Entertainment editor" Marissa Blake-Zweibel, whose name appears nowhere else on the site, then proffers some nonsense about Kim being "the sort of man women want, and men want to be," "a real hunk with real intensity who also knows how to cut loose and let his hair down."

It's total guff, in other words, and obviously — hilariously — so.

For the Korea Times and the People's Daily Online, however, it was evidently all too plausible. The Times reproduced the article almost word for word, even down to the bunk list of previous winners (2011's was Bashar al-Assad, to give you a flavor).

The People's Daily, meanwhile, followed its Communist mandate and gave the people what they clearly want: 55 — yes, 55 — photos of Respected Comrade Hotty. (Allow us to direct you to No. 24: The Squat.)

Given the North Korean propaganda factory's penchant for reporting on positive press its dictator receives abroad, we're only surprised that the spoof didn't make its way onto the Korean Central News Agency's website. (Perhaps they didn't think it newsworthy: like, obviously Kim Jong Un is the sexiest man alive, hello?!?!!)

The snickers have not yet reached either newspaper's ears, since both features are still accessible online. Long may they remain so, fine additions to a pantheon of irony fails. (UPDATE, Nov. 28: Both articles now sadly seem to have been removed. We've linked to screenshots instead.)

Here are a few more of our favorites (more can be found on dedicated spotter website LiterallyUnbelievable.org):

1. China thinks the US Congress is threatening to move to Memphis unless the Capitol building gets a retractable dome. When will they learn? The Beijing Evening News was taken in in July 2002, according to Reuters. They blamed a hapless freelancer.

2. The New York Times thinks Barack Obama was on the cover of Tiger Beat. The venerable newspaper was forced to issue one of its most po-faced corrections in April 2011, after it printed a spoof cover alongside its feature on Tiger Beat magazine. The editors truly thought that Obama had told the teen-girl magazine "I sing in the shower," and other "personal facts."

3. Republican Representative John Fleming thinks Planned Parenthood has opened an "abortionplex." The congressman from Louisiana was ridiculed earlier this year for warning his Facebook subscribers that the reproductive health organization charity wanted to provide "abortion by the wholesale."

3. India thinks one woman uploaded 12 million photos of her holiday onto Facebook. Just last week, India Today challenged its readers to beat the nonexistent record. The article has since been removed.

5. Many, many Americans believe President Obama has a secret son and took him to the Democratic National Convention this summer. A depressing number of conspiracy theorists thought they'd stumbled upon a scandal willfully ignored by the "mainstream media." This is just one example.

6. Iran thinks rural white Americans would rather vote for Mahmoud Ahmadinejad than Obama. Editors at FARS News Agency must have been rubbing their hands in glee when they spotted this bogus Onion poll in September. They fell for it hook, line and sinker – only to run a grudging apology a week later, maintaining that most US voters would probably pick Ahmadinejad over Obama, if only America were free.