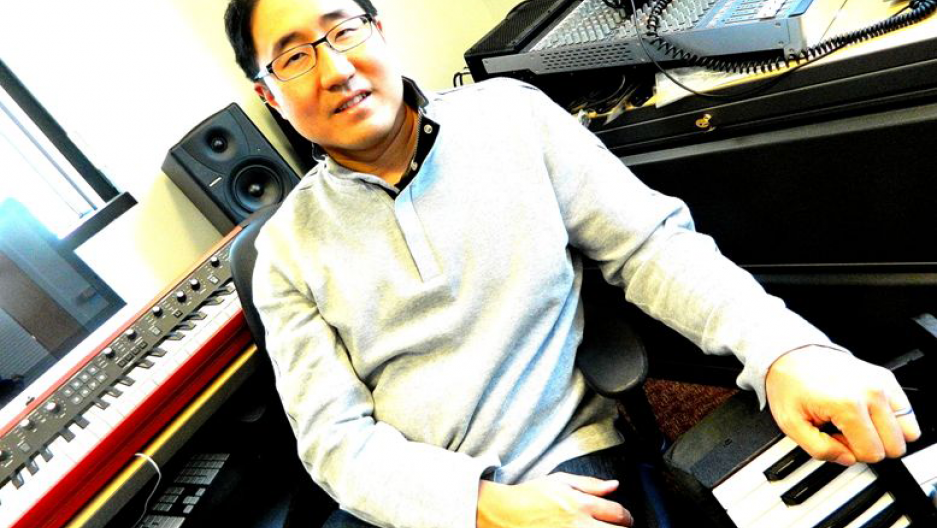 Charles Limb is doing research on how the brain changes when engaged in creative pursuits. (Photo by Aaron Henkin.)

Charles Limb wants to know what happens in our brains when we play piano.

Limb, a professor of otolaryngology at Johns Hopkins School of Medicine, who has a side project that involves brain research. He’s also on the faculty at the Peabody Conservatory of Music

In order to get the information that he wants, he just needs to put a musician in an fMRI machine and watch what happens when he plays. Seems simple, right, until you consider that much of a piano is made of metal. Metal and magnetic resonance imaging don't mesh.

So Limb had a special keyboard made using no magnetic metal parts.

“You’re laying on your back and he’s got a double mirror,” said Mike Pope, a jazz pianist who participated in the study. “Your head is in a cradle kind of thing — a cage, actually — you’re crammed in there. Your knees are up in the air a little bit and you’re seeing the keyboard laying on your knees. They shove you all the way into the tube and you’re just in there, just enough movement to move your arm, essentially.”

The conditions are hardly conducive to a great performance, but quality isn’t the point. It’s the design of Limb’s study that is innovative.

He has a pianist first play scales, then play a learned melody over a backing track, and then improvise over the track. This way, he separates out the creative part from the more rote aspects of a performance.

He studies the images to see what’s changing in the brain during these distinct musical tasks.

“When you transition from a memorized state to a creative state” hot spots appear in the prefrontal cortex, Limb said. "(They) imply that there is a self-expressive or autobiographical region that’s active” during improvisations.

“(Simultaneously, there’s this broad shutdown of activity that’s occurring in the lateral prefrontal cortex, what we call deactivation," Limb said. "One of its main roles is conscious self-monitoring and regulation of output so it matches an intended effect.”

Expression plus deinhibition is what Mike Pope calls “getting out of your own way.”

Limb has also done an fMRI study of freestyle rappers, published recently in Nature. He’s intrigued about the possibility his research could lead to creativity-enhancing drugs — as opposed to drugs currently used that heighten alertness, for example, or that dampen inhibition — like booze.

“We are going to have interventions, whether they are pills or other sort of commonly available things, that are going to specifically affect the way our creative circuitry works," he said. "I don’t know if it’ll be during my lifetime or not, but I’m quite sure that’s going to happen one day."

Limb says the scientific community would be foolish to ignore this oncoming shift.

"I mean, creativity — you probably can’t get to a more important basic process by which we evolve,” he said.