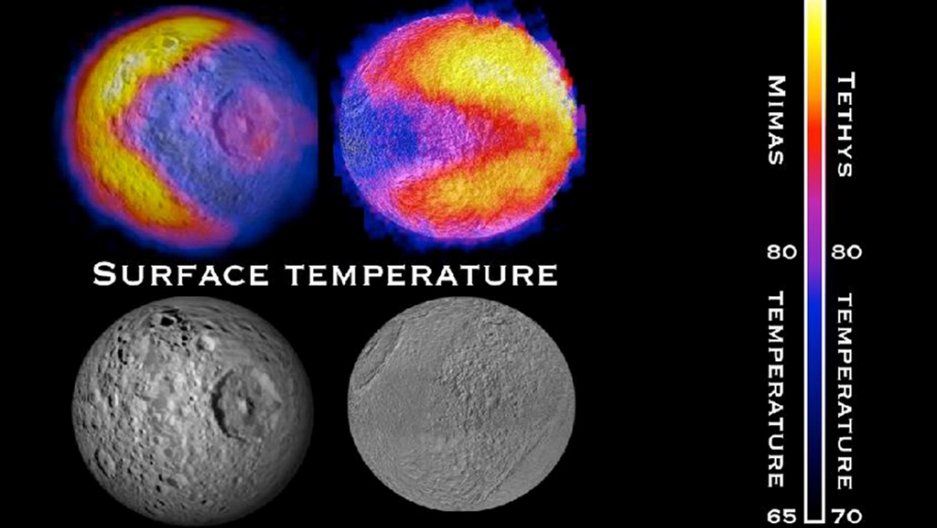 The image of Pac-man appeared in the thermal data of one of Saturn's moons recently - the second such occurrence.
Credit: NASA/JPL-Caltech/GSFC/SWRI
Share

Pac-Man has once again shown up on Saturn's moon in a new image from NASA.

The Pac-Man shape was seen on Saturn's moon Tethys in thermal data, which outlines the warm and cold parts of the moon. This is the second time scientists have observed the phenomenon on one of Saturn's moons: Researchers found the most recent Pac-Man shape in an image from last year, and found an earlier one on Mimas in 2010.

It seems that the hottest parts of the moons Tethys and Mimas make the shape of the insatiable, yellow-hued video game character.

Scientists now believe that there must be a pattern at work, but they are still not sure why the heat signals take this shape.

“Finding a second Pac-Man in the Saturn system tells us that the processes creating these Pac-Men are more widespread than previously thought,” said study author Carly Howett in a statement, according to The Space Reporter.

“The Saturn system — and even the Jupiter system — could turn out to be a veritable arcade of these characters,” he added.

Geekosystem reported that the heat signature may be the result of charged particles that smash into the side of the moon that faces Saturn.

This bombardment changes the way that the ice-covered surface of Tethys and the other moons hold and distribute their heat.

The finding was recently published in the journal Icarus.