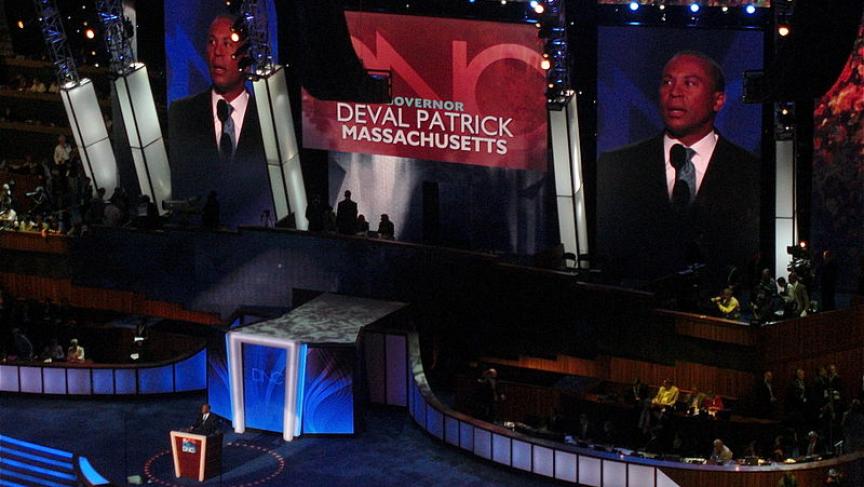 Mass. Gov. Deval Patrick speaks during the second day of the 2008 Democratic National Convention in Denver, Colo. (Photo by User:Qqqqqq via Wikimedia Commons.)

Gov. Deval Patrick of Massachusetts last week brought his state in line with 13 others by issuing a directive to the state’s Board of Higher Education to require all state universities and colleges to charge undocumented immigrant students in-state tuition — just as they would charge in-state tuition to any other Massachusetts resident.

The action comes five months after President Barack Obama launched the Deferred Action for Childhood Arrivals program, which enables people who immigrated illegally to the United States as children to defer removal from the country for two years and receive certain documentation that makes getting work and going to college easier.

That measure has proven popular with many, though certainly hasn't come without controversy. Allowing undocumented immigrants to get in-state tuition is quite controversial as well. In Kansas, for example, there have several attempts to roll back its legislation granting in-state tuition to for immigrants.

Sarah Birnbaum, the political and statehouse reporter for WGBH, has been tracking local reaction to the directive, and says it's been a priority for Patrick for a while. But to-date he hasn't been able to get anything through.

"Since 2005 or so it's sort of been a non-starter, and the legislature just lost steam," she said. "President Obama's directive has given him an opportunity to go forward with it."

Lawmakers from both sides of the aisle are annoyed that Patrick effectively went over their heads in enacting this legislation.

Patrick rejects that, though, saying this is within existing policies.

"Not every policy requires a legislative review," he said.

Birnbaum says states across the country are moving in both directions — in terms of what rights they grant undocumented immigrants.

"And you really can't track which states are doing what," she said. "It doesn't really follow your expectations."

"It cuts across partisan lines, which is really interesting," she said.

New York California and Ohio all went for President Obama, while Texas, Georgia and Arizona backed Republican Mitt Romney. Interestingly, Romney himself vetoed a 2004 attempt by the Massachusetts legislature to grant in-state tuition to undocumented immigrants.

For his part, Obama has promised to make immigration reform a top priority of his second term. Patrick himself agrees that the federal government needs to act, saying that his measure was no substitute for comprehensive immigration reform.

"We still need that," he said.