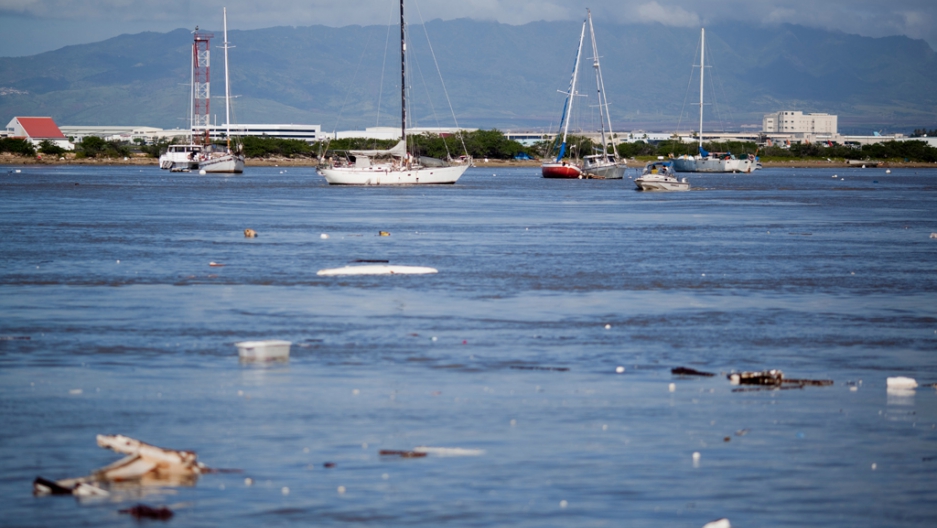 Debris floats in Keehi Boat Harbor on March 11, 2011 in Honolulu, Hawaii, after a tsunami swept through the area. Tsunami waves rolled thousands of miles across the Pacific Ocean after a massive earthquake off Japan.
Credit: Kent Nishimura
Share

TOKYO, Japan — What do an empty fishing boat, a Harley-Davidson, and a soccer ball have in common?

For residents of the West Coast of the US and Canada, they are all reminders of the devastation unleashed on the other side of the Pacific Ocean by last year's Japanese tsunami.

The March 11 disaster, which killed almost 20,000 people, generated tens of millions of tons of wreckage, most of which remained on land. But it also swept an estimated 5 million tons of debris out to sea, 70 percent of which later sank. The fate of the remaining 1.5 million tons is causing concern in communities from Alaska to California, amid warning that the trickle of debris arriving on US shores could soon turn into a deluge.

Japan's environment ministry says it expects about 33,000 tons of debris washed away by the tsunami to reach the western coast of North America by next June.

Depending on ocean and wind currents, large quantities of debris could wash ashore as early as this winter, according to the National Oceanic and Atmospheric Administration (NOAA). The other possibility, it added, was that much of it will be swallowed up by the Great Pacific Garbage Patch, a gyre of marine litter in the central North Pacific.

More than 1,400 reported sightings of tsunami junk have been made along the coast since the disaster on March 11 last year, but only a handful have been linked to the disaster, the NOAA said.

They include lumber, buoys, plastic barrels, fishing nets and equipment, and Styrofoam. The expected increase in the volume of objects reaching the end of their 5,000-mile journey across the Pacific Ocean presents coastal communities with a potential environmental nightmare.

"Marine debris is an ongoing problem, especially around the Pacific," NOAA spokesman Keeley Belva told GlobalPost. "It can damage marine habitats and entangle wildlife, it can become a navigational hazard for vessels, and can be an eyesore on our beaches."

In Washington state, one expert has warned that a floating field of debris measuring about 2,000 miles in length and 500 miles from north to south now lies just 400 miles from the coast.

If it continues to drift at its current speed, the state can expect to see a dramatic increase in the volume of debris making landfall by the middle of December, said Curt Ebbesmeyer, a retired oceanographer at the University of Washington who is tracking the debris.

"It didn't go away, because we haven't seen it," he told the Everett Herald. "This quiet is a little bit ominous."

Whatever the flotsam and jetsam's eventual trajectory, local authorities have made "reasonable preparations" to deal with the debris, according to Ian Miller, coastal hazards specialist at Washington Sea Grant, a marine research organization based at the University of Washington in Seattle.

"There are plans in place at the local and state level, and certainly a great deal of thought has gone into how to use the public funds and resources currently dedicated to this problem efficiently."

Miller added that it was impossible to tell which states were most at risk. "We can identify broad patterns in shoreline accumulation patterns … but we have little sense of how the debris will distribute [at the state level]. We can't say, for example, that Washington will get less or more than Oregon."

The arrival of a 165-ton concrete dock in Oregon in June, after 451 days in the North Pacific, aroused concern about the debris' possible environmental impact.

Attached to the dock were about 100 species of marine life, two-thirds of them native to Asia. If the creatures — including a highly predatory starfish usually found in waters off Japan — are left to establish themselves, they could pose a threat to local marine life.

"There are concerns about aquatic species associated with tsunami debris invading West Coast ecosystems," said Belva. "The floating dock was fouled with a number of organisms native to Japan and this incident raised awareness of the potential introduction of non-native and possibly invasive species to the United States from Japanese tsunami debris."

Fears that items from Fukushima prefecture, scene of the accident at the Fukushima Daiichi nuclear power plant, could be contaminated by radiation have so far proved unfounded.

"Washington state has been testing debris for radioactivity and, thus far, has found nothing at levels of concern," Miller said.

What of those items that have made the headlines? The fishing vessel was sunk by the US coastguard, while the Harley-Davidson was traced to its owner, Ikuo Yokoyama, who lost three members of his family in the disaster, after it ended up in British Columbia. Yokoyama gave permission for the motorcycle to go on display at the Harley-Davidson museum in Milwaukee as a reminder of the tragedy. A couple from Alaska found the soccer ball and, through media coverage, made contact with its owner, Misaki Murakami, a 16-year-old boy from Rikuzentakata who lost his home to the tsunami.

In the coming months, a small army of volunteers is expected to help identify more debris on the shoreline. Inevitably, it will include possessions belonging to the hundreds of thousands of Japanese affected by the disaster — reminders that its environmental impact aside, the tsunami was, above all, a human tragedy.

"This presents us with an opportunity to in some way offer comfort to the people of Japan that were directly impacted by this catastrophe," said Miller. "The worry that we have on this coast about debris from the tsunami pales in comparison to the concerns of the victims of the tsunami."