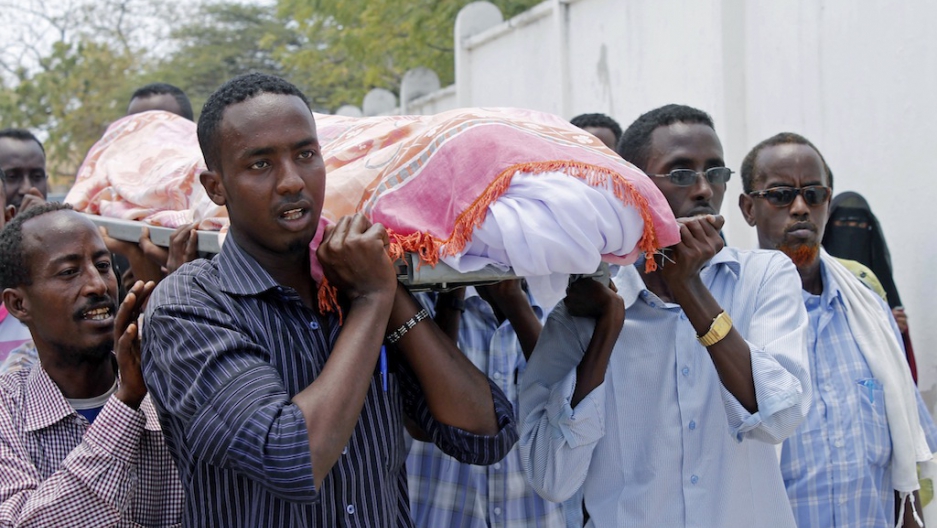 Somali people carry the body of journalist Abdisatar Dahir who was killed in a double suicide attack in a restaurant in Mogadishu. According to the International Press Institute, 16 journalists have been killed this year in Somalia, 119 total worldwide, the highest number since the 1990s.
Credit: Mohamed Abdiwahab
Share

Journalists are at risk on a global scale, and while reporters used to be afforded a bit of a safety net when covering violence and war, those days are over. No one is safe, and governments respond with impunity, making it easier to kill reporters without suffering consequences.

In Gaza last week, three reporters were killed by an IDF airstrike, despite the car being clearly labeled "TV". In Syria earlier this year, Marie Colvin and others were specifically targeted by the Assad regime and murdered. In Mexico, reporters and photographers are regularly kidnapped and killed by cartels to send messages to the papers they work for. And in Iran earlier this month, a blogger was killed while in police custody.

These are just a few examples of the 119 journalists killed in the line of duty this year, the most since the International Press Institute's Death Watch began keeping track in 1997.

"All across the world - from Africa, Asia and Europe, to the Middle East and Latin America - journalists continue to be systematically and brutally targeted because of their work," said IPI in an op-ed co-written by Michael Spindelegger, Vice-Chancellor and Foreign Minister of the Republic of Austria, and Alison Bethel McKenzie, Executive Director of IPI.

The Committee to Protect Journalists, at their annual benefit dinner last week, also called for an end to attacks on the press, and Alan Rusbridger, Editor in Chief of the Guardian, who was honored at the event, noted that it's not just criminals and cartels who are targeting journalists. Governments, too, are responsible for the deaths of reporters.

“Targeting journalism has become a trend, and now the people who are harassing and killing journalists include governments as well as the people you would expect,” said Rusbridger, according to the NY Times media columnist David Carr, who penned a harsh column yesterday titled "Using War as Cover to Target Journalists." (A must read.)

Meaning, simply, journalists who don't tow the line can be considered terrorists. The three reporters killed worked for Al-Aqsa TV, a station owned by Hamas, but which is also the Gaza Strip's main media outlet. In the car ahead of them were two members of New York Times staff.

This impunity, IPI has noted, is one of the major obstacles to protecting journalists in crisis areas.

The same can be seen in Mexico, where the government does little to protect the press in that country. Instead, newspapers have resorted to asking the cartels what they should report so their staff won't be targeted.

After photographer Luis Carlos Santiago was killed in Ciudad Juarez, the paper there ran a front page editorial "addressed to drug groups asking them what they should or should not publish so that employees are not attacked," according to the Christian Science Monitor.

Seven journalists have been killed in Mexico in 2012, three of those in May, on World Press Freedom Day in Veracruz. Their bodies were "dumped together in plastic bags near a canal, less than a week after the killing in the same state of a reporter for an investigative newsmagazine," reported Fox News Latino.

On IPI's annual International Day to End Impunity this weekend, a roundtable on the safety of journalists addressed the issue of governmental avoidance when it comes to prosecuting those responsible for killing members of the press. Representatives from the United Nations, as well as NGO workers and journalists, discussed this global threat to the media and what can be done.

"If a journalist is threatened... the system is under threat," said Christof Heyns, United Nations Special Rapporteur on extrajudicial, summary or arbitrary executions. "Any individual journalist is part of a larger web and that needs to be highlighted. The two things to focus on are prevention and accountability.

"But these things are really interlinked. In those societies where there is no accountability, where there is impunity, are those societies where threats to journalists are the strongest... The question is, what can we do to make both local journalists and foreign correspondents safer, and the answer lies in strengthening the links that they have in a way to elevate the issue."

Heyns and others on the panel pointed to the need to elevate the issue both from a local-to-national level and from a national-to-international level, which would force governments to take action and also allow information to be spread and shared on a larger scale. Only when it becomes clear that it is unacceptable to target the media and that action, not impunity, will be the response to murdering reporters, will there be some success in lowering the number of lives lost to reportage.

"There is nothing that can justify the killing or a extrajudicial execution of a journalist," said Heyns.

This is part of a series by the RIGHTS blog on press freedom around the world. Read more:

Tunisia struggles with press freedom on first anniversary of elections