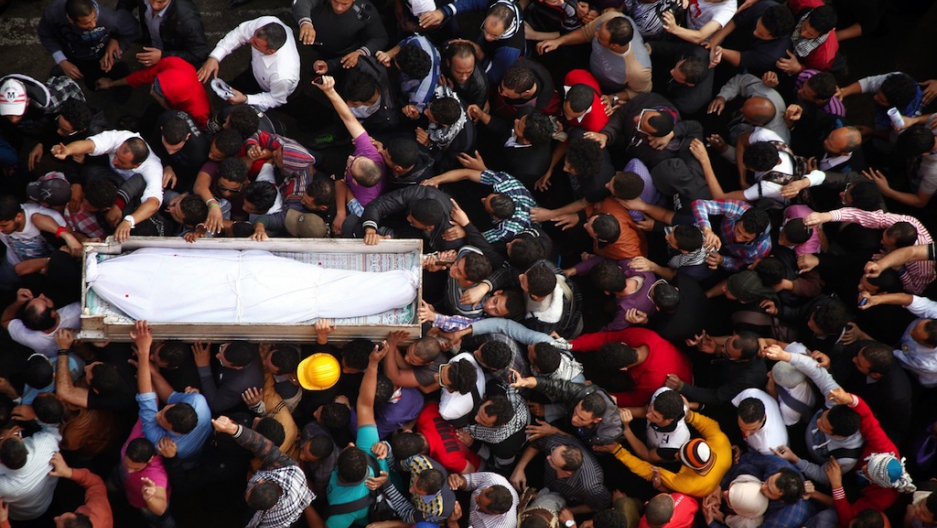 Egyptian Activists and April 6 movement members carry the coffin of Gaber Salah, an activist who died overnight after he was critically injured in clashes near Cairo's Tahrir Square last week, during his funeral at Tahrir square on November 26, 2012 in Cairo. Salah, a member of the April 6 movement known by his nickname "Jika", was hurt in confrontations between police and protesters on Mohammed Mahmud street where protesters had been marking the first anniversary of deadly clashes.
Credit: MAHMUD KHALED
Share

Thousands of supporters rallied at the funeral of young activist Gaber Salah, known as "Jika," who died overnight after he was critically injured in a clash between protestors and police in Cairo last week.

AFP reports that mourners followed 16-year-old Salah's coffin as it was carried from Omar Makram mosque in Tahrir Square towards Mohammed Mahmud street, which has seen increasing violence over the past week.

According to EuroNews, more than 500 people have been injured in clashes between police and protesters since President Mohammad Morsi announced his expansion of powers last Thursday.

Mourners reportedly comforted Salah's mother and marched alongside his coffin.

“It isn’t acceptable to have such killings now. We refuse all sorts of violence,” longtime activist George Ishak told AFP. “What is happening is a warning to Mursi that the country is in danger,” he said.

Ahram Online reports that no political chants or banners were allowed at the funeral and that men, women and children were all in tears.

"I am not here to pursue the revolution's demands, but for retribution for the murderers of Egyptians. I can't forget my friend who was killed in this area," Mohab Selim, one of Jika's friends, told Ahram Online.

Even those who did not know Salah saw him as a member of their family.

"Jika was the same age as my grandson; I could not stay at home while my heart is in pain," Soaad Fouad, who participated in the march in her wheelchair, told Ahram Online.

Egypt's Daily News reports that Salah was shot in the head and had been on life support for five days. He was pronounced brain dead on Wednesday but kept on life support by his family, who hoped that he would recover.

He was pronounced dead on Sunday.