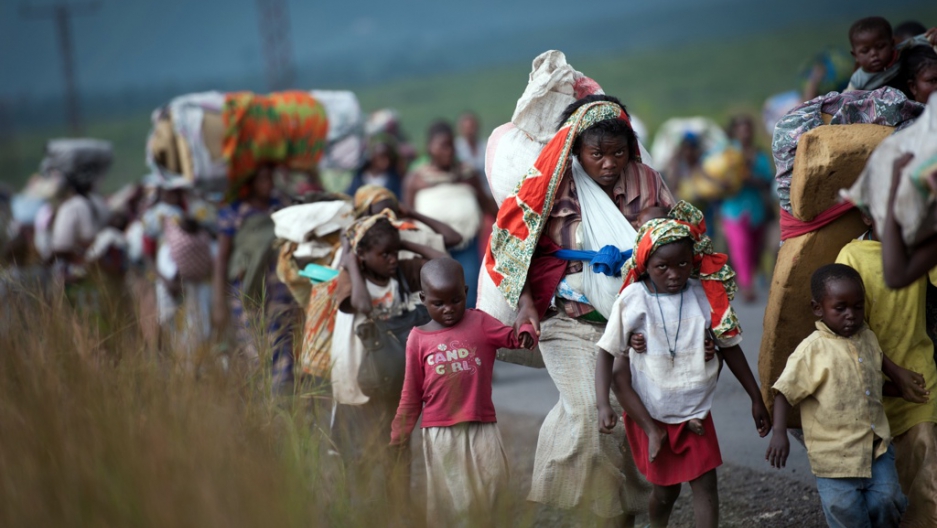 Thousands of Congolese flee the town of Sake in the eastern Democratic Republic of the Congo.
Credit: Phil Moore
Share

GOMA, Democratic Republic of Congo — Men in Red Cross bibs and surgical gloves collected the bodies over the weekend, lifting them onto already blood-stained stretchers, and carrying them to hastily dug graves.

Outside the eastern Congolese town of Sake, the gravediggers removed ID cards in the hope that whatever relatives the dead men might have would eventually be told of their son’s, or their brother’s, or their father’s death.

The corpses were left on the side of the road for two days after M23 rebels repulsed an attack on Thursday by the Congo army in a firefight that forced tens of thousands of Sake residents to flee. Since that attack, the front lines have been relatively stable, as regional governments meet to try to stop eastern Congo’s crisis from again exploding into a larger conflict.

Under pressure from his fellow heads of state, Congolese President Joseph Kabila signaled his willingness to negotiate with the M23, a rebel group led by renegade army officers who mutinied in April and who are believed to have the backing of Rwanda.

But the Congo government says M23 must leave Goma first, a demand the rebels have rejected. The leader of M23’s political wing, Jean-Marie Runiga Lugerero, said any rebel withdrawal would be “the result of talk” not a “prerequisite.”

As negotiations make their stuttering start, the horrors triggered by this latest outbreak of violence in the eastern Congo are not abating. And the humanitarian crisis is growing.

In Shasha, a village south of Sake where M23 rebels have established their forward-most position, the calm is deceptive. The government position — manned by members of a loyalist Mai Mai militia — is just a few hundred yards away, beyond a government tank with its track blown off by a rocket. Mornings start with sporadic shooting.

In Kirotshe, a few miles before the last rebel position, people sleep in the hospital at night hoping it might offer more safety than their flimsy huts if the fighting restarts or if the marauding Congolese army, fearful in its retreat, returns to rape and pillage.

The few journalist that have made it to Minova, a town where thousands of government troops have gathered since being routed by rebels last week, said a terrible anarchy has taken hold. Soldiers, drunk by noon, rape and steal with impunity.

Congo’s army has long been considered a corrupt, predatory force. Its human rights abuses are legion and catalogued. Just last week the head of the Congo army, Maj. Gen. Amisi, was sacked for corruption, accused of selling government weapons to the very rebel groups his soldiers were fighting.

But just because Congo’s army is murderous, abusive and next to useless, that does not mean the rebels are much better.

The rebels might be more organized and, based on recent clashes, a more proficient fighting force. But M23’s godfather, Gen. Bosco Ntaganda, is a former warlord wanted by the International Criminal Court in The Hague for war crimes and crimes against humanity.

Some of M23’s top commanders have long histories of human rights abuses as well, recruiting child fighters for a succession of conflicts in eastern Congo. Human rights groups have detailed evidence of summary executions, forced enlistment of children and adults, rape and other abuse in areas under M23 control.

There are no good guys in this conflict.

Congo’s government, described universally as self-serving and inept, created the vacuum that M23 and its Rwandan sponsors are filling. The United Nations has accused Rwanda of fueling the war through its greed and ethnic self-protection, an instinct born out of the trauma of the 1994 genocide. The United Nations also believes Uganda — which is playing the role of regional mediator — is supporting the rebels.

The trail of responsibility does not stop in the region alone.

The US delegation to the United Nations, led by Susan Rice, has shielded Rwanda from explicit censure for years, pointing to President Paul Kagame’s impressive domestic development credentials.

Meanwhile, the 17,000-strong UN peacekeeping mission failed to prevent the M23 from overrunning Goma, the provincial capital, and has otherwise been incapable of ending the fighting or protecting the civilians caught up in it.

The one thing that seems certain is that hardship will endure. Aid agencies say that hundreds of thousands have been forced from their homes by the recent fighting, food is getting scarcer and there are fears of a cholera outbreak.

For the Congolese, at least the ones without guns or power, there’s only one thing that matters: “Everyone’s praying for peace, we don’t care who takes over, people just want peace,” said Salukombo as he prepared to spend yet another night camped out with his family at Kirotshe’s hospital.